What’s in the bag?! Check out 2 wild equipment finds on tour 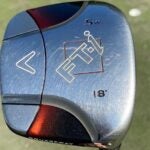 Eduardo de la Riva continues to use a Callaway FT-i 5-wood that was originally released in 2008.

With a plethora of interesting gear setups on tour, GOLF’s managing equipment editor Jonathan Wall highlights a few each week that are deserving of extra recognition. We kick things off with two worthy selections from the European Tour.

New clubs are the norm in professional golf — at least that’s what we tell ourselves. When you possess a tour card, playing the latest gear can give you an edge. Not to mention the clubs are free, so why not load up on as much gear as possible! Or maybe that’s just my mindset.

“Ancient” clubs exist on Tour as a reminder that we, the golfing public, don’t need the latest and greatest to go low. It’s all about comfort and confidence, friends. Which brings us to Eduardo de la Riva’s square Callaway FT-i 5-wood. This puppy was originally released in 2008 and features some massive gashes on the crown that almost look like homemade alignment aids. (They aren’t, to be clear.)

The club is completely beat and has seen better days, but Eduardo still can’t kick it to the curb. This is without a doubt one of my favorite clubs in professional golf. It has character for days.

Five of a kind

We’ve spent plenty of space on GOLF.com singing the praises of the four-wedge setup. Sure, Tiger Woods has played a three-wedge configuration with decent success during his career — but you’re no Tiger.

Adding a fourth wedge is designed to make it easier to have a full swing on those critical approach shots from inside 130 yards. Even if it takes some tweaks to the current setup, finding a spot for that extra wedge will be worth it in the long run.

But what about five wedges? Now that takes some creativity. The average stick isn’t taking a page from pro James Hart, but that doesn’t mean we can’t gawk at his five-wedge configuration. According to a few Instagram commenters, Hart drops his 3-wood to make room for the fifth wedge. It’s a bold play.

What’s even more impressive is the fact that Hart has some reasonable loft gaps (4 degrees) going on. He begins with a Ping Blueprint pitching wedge, transitions into 50- and 54-degree Callaway MD5 Jaws, adds a 58-degree Artisan (shoutout Mike Taylor), and closes it out with a 62-degree Ping Glide Forged.