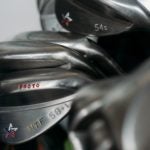 Unless you’re Phil Mickelson or see a value in carrying five wedges during the weekly game, it’s very likely your golf bag features three or four scoring clubs. Determining the ideal wedge setup is something we’ve discussed in this space in the past. Loft gaps can vary depending on the player, but the common setup normally consists of a sand wedge and lob wedge.

Of the two, the lob wedge is the daredevil. It’s designed to hit super flops and stop the ball on a dime; it can be used out of bunkers and from tight lies. There’s a reason why so many golfers pull this club in a pinch: It’s really versatile. Or so they think.

The sand wedge, on the other hand, is a grinder. It doesn’t get nearly the fanfare as the lob wedge and tends to earn a spot in the bag because it can do two things: hit a specific yardage and tackle bunker shots where a towering splash-out isn’t necessary.

But if one were to ask Artisan Golf co-founder Mike Taylor, golfers aren’t giving the sand wedge its due. Having worked on clubs for some of the best players in the world — Tiger Woods, Rory McIlroy, David Duval, Bernhard and many more — during more than three decades in the equipment industry, the Texan has seen it all — specifically when it comes to wedges.

And if there’s one thing Taylor believes, it’s that recreational golfers need to stop putting the sand wedge in a confined box.

“We need to be openminded,” Taylor said on GOLF’s Fully Equipped podcast. “Here’s something that concerns me today: People have started looking at sand [wedges] like they’re another gap wedge. A sand [wedge] is not just a gap wedge. It is not just an approach shot golf club.

“Our golfing community here in the States, we are lob wedge lovers. That’s all good, but it’s not necessarily always the club that we need to execute certain shots. And that sand [wedge] is not just to be used from that yardage where you’re comfortable with it; it’s that balance of the game, and we try to enable people to understand that here in our fitting processes. I don’t want to see people put their sand wedges in a category where it just fills another gapping. It’s a useful tool in a lot of places.”

Instead, Taylor stresses the importance of embracing the versatility of the sand wedge and not defaulting to the lob wedge every chance you get. Learn to get creative with the club and, say, practice low runners that check and stop around the green. Manipulate the face and add some shots to your arsenal.

“You don’t have to have a tour card in your pocket to be a great wedge player,” said Taylor. “But you gotta know how to play. [The sand wedge is] not a hit it as hard as you can. There’s certain controls and often times during the fitting process we put people in that place where we can help them understand what that control mechanism is.”

So the next time you’re practicing around the short game area, give the sand wedge some extra attention. It may just end up saving you some shots on the course.