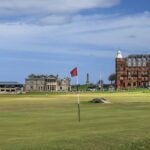 Ed. note: With each new Top 100 Courses ranking comes new learnings, both large and small. Our 2021-22 Top 100 World list is no exception. To better understand this ranking’s key trends and takeaways, we asked Ran Morrissett, who manages our ratings panel, for his observations. Here’s the fifth installment of his seven-part series. Stay tuned to GOLF.com in the coming days for more of Morrissett’s insights.

“Nothing rolls like a ball,” a friend needles when I race a putt past. Fostering the primal delight of chasing a ball along the ground is critical and helps explain why The Old Course at St. Andrews (No. 3), the queen of tight and short grass play, seems unlikely to ever leave the world top five. Its turf perfectly complements the design, and The Old Course epitomizes the melding of design with great greenkeeping.

Admit it: You don’t tune into the Masters every April to watch balls land softly beside the hole on the 16th green at Augusta National (No. 9). No! You want to see tee balls land well right, eventually take R.T. Jones’ masterful slope and slowly track toward the famous Sunday hole location. And who doesn’t enjoy seeing the sweep of the ball after it lands on greens like those on Nos. 11, 14 and 18 at Muirfield Village? It’s the moment when you aren’t sure if the ball will cooperate that makes playing this game the most riveting. At any Tour event, each revolution of the ball as it tumbles toward the green or the flag is what fuels crowds to heave with expectation and, when the ball obeys, explode in a frenzy. That’s drama, folks. It’s also a sign of great design.

The notion of asking golfers to hit toward Point A to end up at Point B is flourishing. No wonder the Redan has been the most copied hole for over a century. (Ten-plus versions appear on our list.) True, the idea breaks down when things get soft and mushy, which is why “fast and firm” rules the rank. Firm conditions demand that you think about two things on every shot: where you want the ball to finish and where you need to land the ball to get it there. In soft conditions, the two are boringly the same.