What is a ‘Lion’s mouth’ hole? And how can identifying one help your next round? 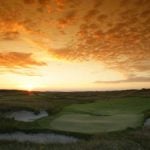 The view from the Lion's mouth, the famed 8th green at Sand Hills.

Welcome to A Beginner’s Guide to Golf Course Design, where we dig into the history, design and meaning of golf course architecture terms you’ve probably heard before but might not fully understand. We’ll explain all of the above in an accessible Q&A format, and better yet, teach you how to identify these features and plan your attack for the next time you see one, saving you strokes along the way. In this installment, we’re breaking down a Lion’s mouth hole.

We have already taken a look at the “Hog’s back,” but now it’s time for a different animal element, the “Lion’s mouth.”

The main feature of the Lion’s mouth template is a large bunker that sits up against or is entrenched in the front of the green. Depending on the version, the green sometimes extends down past the bunker on either side, creating alleyways. This area is not usually pinnable but is often green or very tight fringe to allow running shots to the front for the bold player. The bunker doesn’t allow for low running shots to the front of the green unless you are very precise and avoid it on either side.

The Lion’s mouth bunker is great strategically because it creates different “ideal plays” depending on the pin position each day. The Lion’s mouth affects both the approach and every shot leading back to the tee. These holes are usually par-4’s, though there are some exceptions.

Did this one start at St. Andrews too?

As a matter of fact, yes. This is another template hole with its origins at the Old Course.“Hole O’Cross,” the par-4 13th, isn’t exactly the same as what the template became in North America, but is the architectural inspiration for the design.

Here, the “Lion’s Mouth” bunker sits 30-40 yards short of the green rather than right up against it. There is also a ditch filled with rough that cuts into the green disconnecting the left side from the right. These two elements were combined to create the template hole, with the bunker dissecting the green.

Any strategy to think about?

As with many of the best templates, what is so great about a lion’s mouth green is that strategy completely changes depending on the pin position for that day. When trying to avoid the treacherous bunker guarding the green, the angle of attack is the most important element. If you wind up on the wrong side of the fairway, your approach can easily become a major challenge.

The most common strategy is to attack the green aerially to avoid any chance of being imprecise and ending up in the bunker. This can change the strategy depending on the hole. For a par-5, going for it in two might not be as smart as laying up to a full club distance. On a shorter par 4, it might mean taking less than driver off the tee to ensure a full shot from a comfortable distance for the approach.

Where are some others?

The most famed example of the Lion’s mouth template is this 430-yard par-4 masterpiece. The bunker sits several feet below the green and on each side is a strip of green running all the way down to the fairway below. The green seems to melt around the bunker, with undulation to help shots get from one spot to another. The green is protected by bunkers on the left and right side as well. This course is home to some of Seth Raynor’s best templates.

Coore and Crenshaw built a version of the Lion’s mouth at their famed Sand Hills. This par-4 plays 367 yards, with the left side of this boomerang-shaped green more accessible than the right. There are fairway bunkers on the right side to contend with when setting up your approach. Coore and Crenshaw also built a Lion’s Mouth green on 13th of the Sandbox short course at Sand Valley.

Gil Hanse, Jim Wagner, and Geoff Shackelford used the idea to build a par-5 here. This changes the strategy and adds some safer ways to play, but with a smaller chance at eagle or birdie. Even if you lay up, you’re forced to think about the best angle to approach the green with the difficult front bunker. A bunker in the middle of the fairway means the interest on this hole starts long before you reach the green. This California course is full of awesome holes worth checking out.

This is a shorter par-4, only 328 yards from the tips. There is a bunker guarding the right side of fairway for longer hitters, or you can lay a bit further back. Either way, the “kidney shaped” green will be no piece of cake with the lion’s mouth bunker guarding the front. The green has more depth than Charleston, making the aerial attack a bit easier, but also leaving room for more pinnable area.

This 410-yard par-4 has bunkers guarding both sides of the fairway as the hole turns gradually to the right. Being down that side gives a shorter approach, but there are plenty of bunkers to make you think. The biggest factor though is the bunker seeping up into the green with short fringe on either side. This Tom Fazio design in the mountains of North Carolina makes this a beautiful walk even if the Lion gets you between his teeth.