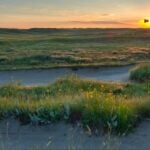 For every great course that made GOLF’s 2020-21 ranking of the Top 100 Courses in the U.S., dozens of more must-plays were left on the outside looking in — including at least a handful in your home state. Some of these designs just missed out on a Top 100 nomination, others finished deeper down the ranking, but all are worthy of your time. To shed light on the best courses in every state, we broke out the full results of our Top 100 Courses polling into state-by-state lists. Here’s a closer look at Nebraska.

Nebraska golf by the numbers:

Gear up for your next round in Nebraska Bill Coore and Ben Crenshaw moved only teaspoons of dirt to construct the most natural, hew-to-the-land layout built since World War II. Rolling, sandy terrain, rippled fairways that were spared from a bulldozer, ever-present winds, wavy prairie grasses and gigantic blow-out bunkers create the sensation of being seaside – in the middle of landlocked Nebraska. The design was immediately embraced, and the minimalist movement started in earnest, with this course arguably kicking off the second Golden Age.

Co-architect Tom Lehman set out to build a walkable course very much in harmony with nature. He and partner Chris Brands more than succeeded, turning this former cattle ranch into an epic homage to links golf. The Dunes Course has it all — sweeping vistas, rolling fairways, enormous bunkers and imaginative green complexes. A taste of Scotland in the middle of Nebraska, it features some of the widest fairways on our list.

For the newly released 2020-21 U.S. list, each panelist was provided a list of 489 courses. Beside that list of courses were 11 “buckets,” or groupings. If our panelists considered a course to be among the top three in the country, they ticked that box. If they believed the course to be among Nos. 4-10 in the U.S., they checked that box, followed by 11-25, 26-50 and so on.

Panelists were also free to write in courses that they felt should have been included on the ballot. (We had fewer than a handful of such additions in the U.S. vote).