PONTE VEDRA BEACH, Fla. (AP) — Rory McIlroy remembers a 19-year-old Texan who was polished for his age and didn’t appear to have a glaring weakness in his game. That was the Texas Open two years ago, the first time he played with Jordan Spieth.

They are together again in The Players Championship under different circumstances.

There is talk of a new rivalry in golf between McIlroy and Spieth, partly because of age, mainly because of recent results.

McIlroy is No. 1 in the world on the strength of winning two of the last three majors and a pair of World Golf Championships. He already has two wins this year. Spieth won that other major – a wire-to-wire victory in the Masters – and moved up to No. 2. He also has two victories this year.

The PGA Tour didn’t let the opportunity pass to put them together for two rounds in its premier championship, which starts Thursday at the TPC Sawgrass.

Even if it’s a budding rivalry, it’s one-sided. Spieth would be the first to concede that.

“He is as far ahead of me as I am with the next eight guys,” Spieth said, referring to the gap between No. 1 and No. 2 in the world ranking. “So with that being said, it’s kind of anybody’s game to get up and make it interesting with him. I just happen to be the one that occupies No. 2 right now.”

McIlroy responded to all the hype over Spieth and his green jacket by winning the Match Play Championship last week in San Francisco. He provided another answer to the chatter about a rivalry by practically yawning.

“Last year it was Rickie (Fowler). This year it’s Jordan, might be someone else, could have been Tiger,” McIlroy said. “There’s been four or five rivalries over the past year. So it doesn’t really do anything for me.”

RELATED: The Top 10 Finishing Holes You Can Play

He then borrowed a line that Jack Nicklaus once told Tiger Woods. Both had a revolving door of rivals over the years.

He would appear to be the one to chase for years, though McIlroy is prone to go into mini-slumps. Think back to one year ago at The Players Championship, when Woods was still No. 1 in the world. Now he’s at No. 125 from not playing well and not playing much because of injuries.

Adam Scott, Henrik Stenson, Bubba Watson and Matt Kuchar were next in line, and all of them had a mathematical chance to be No. 1 at The Players. McIlroy was No. 11. Two weeks later, he won the BMW PGA Championship and was on his way. 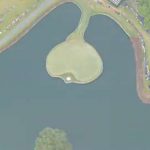 You may also like Talkin’ Golf: Picking a Winner at The Players

But if there is an advantage this week, it might go to Spieth. He was tied for the lead going into the final round in his Players Championship debut and watched Martin Kaymer put on a clinic – and make an unlikely par putt on the island green at No. 17 – to win at Sawgrass.

McIlroy didn’t make a cut at The Players until his fourth try. He tied for sixth last year after closing with a 66, though he was never in contention.

“I heard something that it sort of tests everyone and favors no one,” McIlroy said of the Pete Dye design.

He has adopted a conservative style the past two years and is making progress with a pair of top-10 finishes.

Spieth had a share of the 54-hole lead in back-to-back big events last year – the Masters and The Players – and didn’t convert either. The Masters didn’t bother him nearly as much as Sawgrass because he felt Bubba Watson beat him in Augusta, and equipped with the experience, he failed to use it at The Players.

In both cases, Spieth doesn’t see it as a chance to atone for losses. What carried him at the Masters this year was the memory of recent form – a victory at Innisbrook, a runner-up in San Antonio and a playoff loss in Houston. And if he gets in position at Sawgrass?