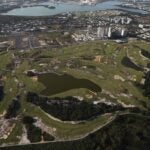 An aerial view of the Olympic Course in Rio.

A tropical storm is stirring over Japan, threatening parts of the country with strong winds and heavy rain just as the men’s Olympic golf competition gets underway at Kasumigaseki Country Club, just north of Tokyo.

But let’s keep things in perspective.

The forecast is nowhere near as gloomy as it was five years ago, the last time Olympic golf was played.

Remember all the grumbling? It was hard to ignore in advance of the 2016 Summer Games in Rio de Janeiro, where golf made its much-ballyhooed return to the Olympics following more than a century’s absence.

From the skeptical perspective, staging golf in the Games was silly enough, given that the sport already ran on a wraparound schedule packed with major international events. Even more absurd, critics complained, was that a new venue was being constructed for just that purpose on an ecologically sensitive site in — of all places! — Rio de Janeiro, Brazil.

Lovely city, sure. Postcard-pretty. But also a poster-child for income disparity, in a country rife with government corruption.

“Golf for whom?” became the rallying cry of protestors, who saw the project as little more than cover for a real-estate play, earmarked for one-percenters.

They didn’t buy the promise, put forth by golf industry bigwigs and Olympic organizers alike, that the course would live on beyond the Games as an outlet for public recreation and a potential draw for getting newbies into golf.

At best, they figured, the grounds would be abandoned soon after the Olympics, or, more likely, transformed into luxury condos, a boondoggle doubling as environmental blight.

So, what became of this disaster-in-the-making?

“It’s doing incredibly well,” says Vicky Whyte, a past president of the Rio de Janeiro Golf Federation who is heavily involved in junior golf in Brazil. “Most people thought that building a new course would be a waste of money. But the opposite is true. It’s the best example we have of the successful legacy of Rio 2016.”

As a prominent golf booster, Whyte is biased. But she also has the facts on her side. Like so many other former Olympic host cities, Rio spent lavishly on the Games, pouring tens of billions of dollars into a range of infrastructure, including nine new arenas for such sports as basketball, judo and tae kwan do. A swim center was constructed, at an estimated price of $50 million, as was a canoeing venue, for roughly that same sum. What those projects have in common is that nearly all are now closed.

The Olympic Golf Course, which cost roughly $19 million, is one of the rare venues built for the 2016 Games that is still being put to use.

Not that it never faced uncertainty.

In the immediate aftermath of the Olympics, where Justin Rose and Inbee Park won gold, the Gil Hanse-Amy Alcott-designed layout did indeed shutter, but only briefly, as the Brazilian Golf Federation searched for an operator to assume the lease. It was up and running again within a few months.

Its operator today is Carlos Favoreto, a businessman with an environmental bent who has done more than keep the course afloat. He has kept it fine condition. Achieving the former depended on the latter.

“(Favoreto) recognized that to get people to play here, he need to keep it well-maintained,” says Marcelo Stallone, a Rio native who played collegiate golf at Oklahoma State and who volunteers on the board of directors for the Olympic Course. “Is it as impeccable as it was for the Olympics? No. But it’s in excellent shape, and it’s a beautiful place to play.”

Is it as impeccable as it was for the Olympics? No. But it’s in excellent shape, and it’s a beautiful place to play.

As for that play, before the pandemic, the course was logging roughly 5,000 rounds a month, Favoreto says. Since tourists accounted for 60 percent of those tee times (for out-of-towners, green fees are roughly $100; locals pay about half that), business took a hit when lockdowns started and international travel ground to a halt. But unlike the other two courses within Rio’s city limits, both of which are private, the Olympic Course was never forced to close during Covid, and it saw a surge in local play from golfers who were shut out of their usual spots.

Though rounds have not yet returned to pre-pandemic levels, the course bolsters its bottom line with a restaurant and a bar, and by hosting weddings, concerts and other events.

Before the Games, supporters hailed the course as a potential tool for growing the game. It was an optimistic pitch that brought with it the burden of high expectations and intense scrutiny. No municipal course in the world has likely ever opened with more eyes upon it, or with a weightier mandate.

Today, golf is not the most popular in Brazil. Or the second-most. Or the third. Or fourth. Or fifth. The favelas do not brim with aspiring Tour pros. It seems naive to think that was ever going to happen.

But the Olympic Course is doing its part to encourage participation. In January 2017, five young golfers were enrolled in its junior program; that number is now 35, and Favoreto says he plans to have it up to a 100-plus once the pandemic loosens its grip on Brazil. A number of offerings have been rolled out as incentives to attract first-timers. In addition to giving three free lessons to beginners, the course is home base for such social outreach programs the Olympic Legacy Maintainers project, which provides instruction and financial support to kids 18 and under, along with training for jobs in golf course operations and other trades. The course also runs a weekly clinic for children with physical disabilities.

The Rio forecast for later this week calls for sunshine, with light winds and temperatures in the mid-60s. Sounds like better weather for golf than for the beach.