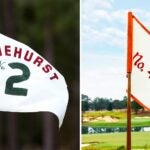 A battle is brewing at Pinehurst.

PINEHURST, N.C. — There are a few sounds that join any self-respecting golf trip to the North Carolina sandhills. One is the whistle of the breeze through the fragrant Carolina pines. Another is the clang of a bell seemingly far off in the distance at Tobacco Road — the sound of your playing partners alerting you to a free fairway just beyond eye’s reach. And then there are the hoots and hollers of a well-served audience at dusk settling an hours-long score at Thistle Due.

The most significant sound, though, isn’t much of a sound at all. It’s a whisper. The kind that escapes from the mouths of a startling number of guests at Pinehurst.

“You know,” they say, lowering their tone as they look you straight in the eye. “I think No. 4 is my favorite course on property.”

At first, it’s a friendly gentleman crossing paths with you in the posh lobby of the Carolina Hotel. But with each passing statement, the murmurs grow louder. Soon, a genteel Pinehurst employee is sharing that he’s always loved No. 2, but there’s just something special about No. 4.

Before long, it’s clear the sound you’re hearing is an argument. A respectful one, yes, but an argument all the same — a difference of opinion between a pair of (politely) warring factions. No. 2 versus No. 4 might be new to Pinehurst, but in truth, its construct is very old. The battle between the old guard and the young gun has been fought for generations, and at “the cradle of American golf,” it’s pitting one of the most famous golf courses in the world against one of its most beloved.

“To someone who truly loves No. 4, I think I’d say ‘thank you.’ I think it’s a reflection that the course really works,” says Gil Hanse, the man who redesigned No. 4. “We hear that a lot. We hear it from players, we hear that from folks at Pinehurst. And all we can say is a humble ‘thank you,’ really, we greatly appreciate that.”

To understand the success of Hanse’s work on No. 4 is to understand the history of the course’s big brother. No. 2 is Pinehurst’s crown jewel, the inaugural member of the U.S. Open rota and perhaps the finest work of legendary designer Donald Ross. It rolls through an impeccable, undulating piece of property, is routed with ingenious simplicity, and manages to challenge great players even without demoralizing poorer ones. Its most notable design features are its turtleback greens, which reject approach shots into collection areas and induce three-putts with delightfully sadistic frequency.

If there’s a criticism to be made of No. 2, it’s that it is lacking in a single signature hole. But the course’s balance might be its most underrated feature. Sure, there’s no chart-topping hit, but this album has 18 terrific songs.

“I love the presentation,” Hanse says of No. 2. “I think I recognize the genius in the green complexes. I’m not sure I love them all the time. They can be really, really hard, but I respect the hell out of them. It really is an amazing, amazing golf course.”

In the mid-2000s, Pinehurst commissioned Bill Coore and Ben Crenshaw to restore No. 2 to its original Rossian glory in time for the 2014 U.S. Open. Coore and Crenshaw widened fairways, expanded green complexes, shaved down rough and redrafted tee boxes en route to one of the most successful restoration projects of the modern era.

Their work was such a smash-hit, Pinehurst began investigating whether there was room for a similar project elsewhere on property. Quickly, they zeroed in on another Ross design, No. 4, which had lost much of its original flavor after years of real estate development and renovation.

It soon became evident that a restoration project wasn’t in the cards — houses sat upon much of Ross’s original work. What the resort wanted was a recreation, a course in the ilk of the original No. 4, but with a new vigor. They called Hanse and his design partner Jim Wagner.

“It was an interesting exercise in that we basically had to go back in and rebuild the landscape,” Hanse said. “We were really more interested in trying to recreate the natural landscape that had been there before the golf courses were built. Then it became, ‘alright, now let’s plug in the elements. Let’s figure out how the greens are gonna sit, how the bunkers are gonna sit, and how people are gonna ultimately play.’ So it was kind of a two-part act in that we had to reconstruct the landscape and then actually go and build up golf holes.”

The design work turned out to be the easy part. Much harder was building something physically (but not figuratively) in the shadow of No. 2.

Today, No. 4 is nothing if not Hanse’s description. On its own, it’s daring, boldly shaped, and notably strategic. Next to No. 2, it’s slightly easier, much wider, and has a handful of true “signature holes,” highlighted by a two-hole stretch along the water.

But that’s not why some consider No. 4 superior to No. 2. On a normal day at No. 4, the reason why Hanse’s work sits atop so many peoples’ Pinehurst power rankings is obvious: it’s fun. Hanse and Wagner placed a distinguishable emphasis on playability, leaving the fairways wide and shaping the green contours to receive (rather than reject) approach shots. The “average” player is far more likely to leave No. 4 with a birdie than No. 2, and much more likely to leave No. 4 with a grasp of the architect’s overarching strategy than at No. 2.

“I think we’re supposed to be having fun out there,” Hanse said. “I know a lot of times, myself included, that’s not the golfer mindset but what we believe is that we should have the flexibility to make a course play more difficult, but we should also have that flexibility to make it play easier. And I think that within our designs you can find both, and probably on a higher level, a little bit more of the fun and playable character versus the difficult character.”

Hanse might be gracious, but he seems uncomfortable with his work appearing in the same breath as No. 2. It’s clear now he might be alone in that opinion — the 2019 U.S. Amateur at Pinehurst removed all doubt. The USGA thought so highly of the renovation, they elected to have the championship split between Nos. 2 and 4. Hanse was stunned.

“For a course that young to have been selected … We were hopeful when we were building it that we would be selected to amongst the other Pinehurst courses for qualifying,” Hanse said, a hint of incredulity still in his voice. “But when the USGA decided the quality was high enough that they would actually play the final match, you know 18 holes on both course No. 4 and course No. 2? That was a great honor.”

There’s an argument to be had about whether No. 4 is truly better than No. 2 — and it’ll take plenty of convincing for GOLF’s Top 100 Course Raters to agree (No. 2 ranked 11th on our latest list of Top 100 Courses in the U.S.; No. 4 was 92nd) … But if you walk 1,000 feet in any direction at Pinehurst, it’s likely you’ll hear someone having it. Even Hanse has his own opinion on it.

“This all started with No. 2,” he said. “No. 2 is the Mecca. Because of it, I think it’s allowed a lot of other really good architecture to shine and be restored.”

In the end, though, the arguments are semantic. Why does everything have to be ranked? Why can’t both courses be great in their own, slightly similar ways? Why do we need to pick the “best course at Pinehurst”?

After all, there’s already a right answer: The Cradle.