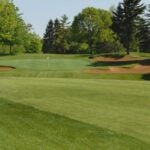 With an all-female superintendent-head pro tandem, it makes history every day.

Champions Golf Course doesn’t look like anything special when you first see it. It’s a well-conceived layout, and challenging — one of the toughest public courses in central Ohio — but if you pull in for a tee time, nothing screams one-of-a-kind. That’s just fine, because Champions seeks to deliver the experience you’d expect from a city-run facility, providing locals easy access to get out and play at a reasonable price. In fact, the course architect — Robert Trent Jones Sr. — might seem at first like the course’s only notable claim to fame.

But focusing on the Columbus, Ohio course’s past misses the point, because it’s the course’s present that’s so remarkable. Champions has become one of the most noteworthy golf facilities in the country because of its current personnel: The head pro is Fran Kocsis. The head superintendent is Sherri Brogan. The two women occupy the top leadership positions at Champions, making it the only known all-female head pro-superintendent duo in the country. They have made the course an unlikely trailblazer in a game that can be slow to adapt. (Ed note: We have been made aware of another all-female head pro-superintendent duo at Sun Willows Golf Course in Pasco, Wash.)

Just don’t count on them to brag about it. “I’m not sure either of us have ever given it a lot of thought,” Kocsis told the USGA, which first reported on the course’s unique one-two punch. “We both love what we do, kind of married to our jobs. We’re well-qualified to do what we do and we have years of experience.”

When analyzing the demographics of the game, it does come as a bit surprise that Champions is the only course nationally with an all-female leadership. According to the National Golf Foundation, women represent 23 percent of all players in the United States. That’s lower than any of us who work in the industry would want, but it’s still a significant percentage; you’d assume they would occupy more significant leadership roles in the game. But that’s not the case. Nor does that mean it’s been easy for either woman get to this point.

“It honestly hasn’t been very good,” Brogan said of her treatment in the golf industry. “It’s taken me quite a while to prove myself, but I’m not sure I’ve proved myself to everyone yet. But I’m at the point now where I really don’t care. I know what the golf course looks like and the product I give. I think I’ve accomplished a lot, but it has not been easy.” The fact that Brogan and Kocsis are such a rarity shines a light on the way golf tends towards the status quo, generation after generation. It was not all that long ago that Augusta National, the game’s most famous golf course, didn’t admit female members. The game has made plenty of progress, but it hasn’t completely ditched its clubby American roots. Golf can be tough for anyone who’s made to look like an outsider. Both women made it clear that their work is always viewed through the lens of their gender rather than purely on its merit.

Brogan has been the superintendent at Champions since 1992, but even with nearly 30 years of experience manicuring the course, she feels like she’s had to keep proving herself. Golfers over the years have called her “every name in the book.”

“I’ve been called everything from a pansy planter to the other day when I was called an ‘f—- c-word,’” Brogan said. “As far as getting respect for being a superintendent or a woman in the industry, I’m definitely not getting that from the golfers.”

That squares with Kocsis’ experiences in the pro shop. Although a majority of interactions with the public are courteous, there are still instances when she has felt delegitimized.

Shortly after earning the job at Champions, an insurance salesman challenged her credentials as a pro at the course. Kocsis was taken aback but explained to him she was a class-A PGA professional and was an accomplished player herself. She believes she was only challenged because of her gender. The salesman made no similar vetting of her male colleagues in the shop at the time. This is hardly a one-off.

“It’s been a tough road for me,” Kocsis said. “But I’ve fought hard and I’ve gotten my credentials.”

In recent years, however, Brogan and Kocsis have felt progress — both in golf and otherwise. The Women’s PGA Championship just played at a renowned country club and doled out its largest-ever purse. The eyes of the golf world will be on the U.S. Women’s Open in December. Augusta National now hosts the premier event in amateur golf for women, opening Magnolia Lane for the Augusta Women’s Amateur the week before the Masters — and the club announced that they’re funding a women’s golf team at local HBCU Paine College. There’s a trickle-down effect; both women are inspired by seeing other women thrive around the golf world.

“Things have changed,” Kocsis said. “Women are now becoming directors of golf, head golf pros, prominent teachers. People are starting to recognize women do a damn good job at what they do.”

The journey has been difficult for both Brogan and Kocsis in getting to the top of their respective fields, but each was adamant that quitting was never an option. Although they were interviewed separately, each had the same message: No person nor obstacle was going to keep them from the field in which they were meant to work. Golfers at Champions can be thankful for that.