Is your golf round cheaper than average? This data will show you 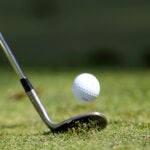 Rounds in September were up 26 percent from a year ago, according to a report.

Seventy-five dollars for 18? A little high.

According to recently released greens fee data for October from the National Golf Foundation, the average cost for an 18-hole round of golf with a cart on the weekend was $61 nationally. The nine-hole average cost was $33.

Be prepared for fall golf The data was released as part of the Foundation’s most recent “Covid-19 update.” The report also said that rounds in September were up 26 percent from a year ago, the biggest year-over-year increase this year, and that golf equipment sales topped $1 billion for the months of July, August and September, a third-quarter record.

The greens fee data, Foundation Chief Research Officer David Lorentz wrote, was used in part in response to a New York Magazine story that described golf as “slow and expensive.”

“Golf obviously has startup costs, but in terms of ongoing expenses, it’s actually quite practical for the majority of Americans,” Lorentz wrote.

“If you’re willing to steer away from the busiest times, that median rate drops to almost $30. That’s somewhere between an $8 and $12 hourly rate for recreation, give or take, which would seem to be as good as anything else that’s pay-to-participate.”