What you can learn from this side-by-side picture of Rory, DJ, Rickie and Wolff 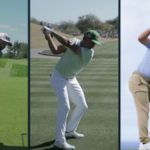 Live, televised golf is backed and I am amped about it.

Last week’s TaylorMade Driving Relief Skins Game was an event in my household and I scheduled all family activities around the broadcast.  Nothing, and I mean nothing, was going to interrupt me watching it.

As far as I was concerned, it didn’t disappoint. Two of my favorite golfers were involved; four personalities showed out and showed off; I got a front row seat and vantage point on my favorite golf swing, and I got to see the famed Seminole GC for the first time ever.  I was like a kid in the proverbial candy store.

As a golf swing junkie and teacher, the highlight of the broadcast was the comparison of the golf swings, especially the contrasts of the McIlroy, DJ, Rickie and Wolff tops of the backswing.

My mind wandered further to a “pearl” by the legendary player and instructor, Claude Harmon, Sr.: “There is one position in the golf swing that matters: impact. Everything else is window dressing.”

Both quotes are indeed loaded with truism and wholly appropriate.  But there are a few elements that run parallel to those observations that need to be considered.

First, “Swing your swing” is not a mandate to continue to butt your head against a wall in the hope that the ball is going to consistently travel in a desired manner if there is something fundamentally flawed about your swing.

Don’t ever forget this principle (which I referenced in my previous column), the ball is going to travel according to the messaging it receives from the Clubface Alignment, Swing Path and Spin Loft. Hence if one, or more, of those areas, are faulty, no amount of hoping and swinging your swing, is going to make the ball fly and better.

In my opinion, “Swing your swing” is more a charge to those folks who have a hankering after the Holy Grail of ball-striking.  Folks who are mistakenly of the belief that making continuous, minor tweaks and changes will have them happen upon ball-striking Utopia.

Second, impact is indeed the moment of truth and is the most important area in the golf swing.

But… if the approach into impact is flawed, impact will become a reactionary, inconsistent and the results are likely to be sub-standard.

The additions to “Claude’s Pearl” is that one (or more) match-ups are required to present the clubface to the ball in a desired fashion. In effect, impact is a result of a series of events leading up to it.

Emulate each one of the tops of the backswings as illustrated by Rory, DJ, Rickie and Wolff.  From that position, in slow-motion, return to a static impact position with the clubface suitably aligned in terms of face-direction, swing path, and height to the ground. You will quickly feel how certain events (you will sense all of those) have to transpire to get the club to the base of the swing.

For example, in the Matthew Wolff version you will more than likely sense how the club shaft has to shallow significantly to arrive in the desired manner.

Once you have rehearsed the four pro’s swings, go ahead and practice yours in slow-motion.

Do this everyday, and I am confident you will see a marked improvement in your ball-striking.

Tiger Woods will never do this in a round of golf, according to Jordan Spieth

On-course announcer and analyst Mark Immelman is passionate about the game of golf. As a decorated instructor, award-winning NCAA college golf coach, and an accomplished golfer, Mark brings a robust knowledge and vast experience to his role as a television broadcaster and golf instructor. He is currently a Golf Analyst for CBS Sports HQ, and an Analyst and On-course Announcer for CBS Sports and Golf on CBS. He is currently also serves a Studio Analyst for PGA TOUR Live and an On-Course Announcer for PGA TOUR Live.

The older brother to 2008 Masters Champion ,Trevor Immelman, Mark grew up in Somerset West, South Africa. After a successful amateur career in South Africa he was offered a golf scholarship to Columbus State University (Columbus , GA). He enjoyed a prolific collegiate tenure highlighted by his four-time All-America selections, two-time Academic All-America awards, and two NCAA Div. II National Championship victories. After graduation, Mark had a short season as a playing professional, but quickly turned his attention to his true passion – golf teaching.

in 2019 Mark was selected as Captain and Coach of the (Arnold) Palmer Cup International Team. His team beat the United States Team in the Palmer Cup Matches held at The Alotian Club outside of Little Rock, AR.

Additionally, Mark hosts “On the Mark”, a PGA TOUR Podcast, which to date has been downloaded more that 2.6 million times in more that 125 countries.