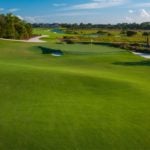 A view of the 17th hole at Medalist in Hobe Sound, Fla.

A week after enjoying an eyeful of Seminole, golf fans will get a look at another prestigious Florida private club when Tiger Woods and Peyton Manning take on Phil Mickelson and Tom Brady in a charity match. What sort of course will we be looking at? What are some of its defining architectural features?

Jeff Lewis (Panelist since 2003; has played 97 of the World Top 100): The course has an unusual history, as a Pete Dye/Greg Norman co-design. Brilliant routing. All the original greens were low-profile and the course demanded British-style approaches that seemed to confuse players (even though the course was marked to front-edge distances). Even better, it was a brilliant driving course. Dye loved putting hazards inside the elbow of doglegs. He’d force wimpy tee shots to run through the fairway because there was no rough. People would whine about balls landing on the green (that the design was saying to land front edge) and going over. They’d also complain about landing in the fairway and running through to the scrub (because they took the wrong line). So over a period of years, Norman shifted the bunkers outside the elbows and raised a bunch of greens, reducing the strategic value of the course markedly. Bobby Weed (who worked with Dye for a long time) was finally brought in to restore the course. There’s a Shell’s Wonderful World of Golf on YouTube with Nick Price and Norman on the original course. Viewers can watch that and evaluate for themselves how successful Weed was at what is probably the earliest (youngest course) restoration ever!

Christian Faergemann (Panelist since 2013; has played 65 of the World Top 100): For me the Medalist is a nice scenery change in Florida. Despite the fact that you play through marshland, it does not feel like Florida. Sort of the same feeling I get when playing Calusa Pines. It could be called a modern classic design in some way with extensive use of waste areas. One cool feature are the tiny revetted bunkers on the 7th and 9th holes. They visually appear very large, but it’s a great optical illusion.

Adam Messix (Panelist since 2015; has played 100 of the World Top 100): Medalist is unique because there is no rough in the pure sense. You are either in the fairway, water, sand or trees/pine straw. Medalist still has some of the Pete Dye influence with the fairways being offset from the tee without it being overbuilt like most of his later work. I would say that Medalist is a mixture of Old Marsh with the amount of trouble/marsh in play and Calusa Pines in the trees and green complexes. As you would expect from someone who is a great driver like Greg Norman, Medalist is a punishing test off the tee.

Paul Rudovsky (Panelist since 2015; has played 100 of the World Top 100): I’ve only played it once, and that was five years ago. I recall a whole bunch of severely and artificially elevated greens, and flat, shallow greenside bunkers. I gather the course has an extremely high water table, making it impossible to have deep bunkers and the raised greens were used to create difficult bunker shots. I also recall a bunch of long carries off the tees. When it first opened in 1995, it was all the rage. By the time I played it in 2015, I heard a bunch of the original members had left as they could not handle the carries off the tee and severity of the course anymore. Age hits us all! McArthur Golf Club opened around 2014 and is next to Medalist, but on a much better piece of land. It has more elevation so there are less issues with water table, and it’s much more fun to play while still being tough when pins are tucked, but playable for all levels of players, in my humble opinion.

Course Rater Confidential: What's your favorite Top 100 Course you played in the past year?