Sand-green golf is cheap, fun and eco-friendly. It’s also under threat. Here’s why

A golfer hits a tee shot on the 7th hole at Valley View Golf Club near Fox Valley, Saskatchewan.

As I sauntered over to the first tee at the Rolling Acres Golf Club in the dusty, one-bar town of Tompkins, I noticed something conspicuous near the ball washer. A fresh mound of dirt. ‘Bout the size of a body. With a white cross planted on top. Not good. I moved closer and read the inscription. “Unpaid Golfer.” Ooh. I stood there for a second, contemplating, dust devil spinning down the 9th fairway, and made a mental note. Might be best to play by the local rules on my sand-greens spin through Saskatchewan.

The problem, of course, is what, exactly — besides the mandatory plunking of a few loonies into the metal box before you play — are the rules of sand-green golf? Call me privileged, but I grew up on grass. (Grass greens, I mean.) So on my swing through what you could call the cradle of Great Plains grassroots golf, I had a lot to learn. I had a lot to experience.

As the anchor tenant on the Canadian Prairies — Alberta to the west, Manitoba to the east — the province of Saskatchewan is the bread basket of Canada. The farm boy. It’s home to some of the friendliest, dirt-under-the-fingernails flatlanders I’ve ever met.

But, unlike the other Prairie Provinces, Saskatchewan’s rumpled, grass-and-wheat smothered hills house dozens — 90, give or take — 9-hole, sand-green golf courses. In fact, “The Land of Living Skies” boasts the largest collection of these lay-of-the-land relics in the world. (A smattering still survives in Midwest states such as Nebraska, Kansas, the Dakotas, etc.)

Why sand, you ask? Simply put, it’s cheap. It’s easy. Mix it with a bit of oil and, presto, you’ve got a puttable surface that doesn’t blow away with the warm westerlies. And you don’t need water. You don’t need pipes, hoses, or sprinkler heads. You don’t need mowers or manpower. You need a rake and a scraper (more on that later) and a few volunteers to come out each spring, or thereabouts, to add a little sand to the surfaces. Maybe plant a flower, or two. Sweep the clubhouse. Clean up the empties. Throw another roll, or two, of TP in the outhouse. These are small-town courses with limited funds. We’re talking budgets in the hundreds. Maintaining turf — let alone costly strains of bentgrass — just isn’t an option. In these parts, if you want a local course, you take what you can get. And it’s better than nothing.

Unfortunately, as I found out, these sand-green courses are fast disappearing. The towns are dying. The young people, for the most part, have no desire to stick around. They’re city bound. So many of the courses have been abandoned. Plowed under. Swallowed by sage and spear grass.

Luckily, some — thanks to a grizzled clan of die-hards (farmers, for the most part) -—cling to life. My goal was to find a few.

You want to play golf? I’ve been looking for someone to play with. Don’t like playing alone. We lost a member last week. A dear friend. He was 84. Played five days a week. We’re down to eight.

Of course, Saskatchewan is far from just a sand-green stronghold. It’s a golf-rich place, period. “There are more golf courses per capita in Saskatchewan than anywhere else in North America,” says Brian Lee, the executive director of Golf Saskatchewan. “We have a total of 216 courses for 1.176 million people.”

Not only that, but many great players call the province home. Current PGA Tour players Adam Hadwin (Moose Jaw) and Graham DeLaet (Weyburn) are from Saskatchewan. And, interestingly, Pat Fletcher, the last Canadian to win the Canadian Open, was the head pro at the Saskatoon Golf & Country Club when he won this prestigious event in 1954.

After offering my condolences to the dead guy buried by the first tee, I paid my wages at Tompkins, grabbed my guttas and smacked it around the pasture. Not surprisingly, there were no holes of architectural brilliance to note. But I did run into Kory, Justin, and Travis, the only other group on the course. They were riding three in a cart and crushing Coors like it was water. I was learning.

Later that afternoon, just outside of Hazlet, population 106, I lucked out and met local farmers Duane Sletter and Brian McIntosh sipping suds in the parking lot at the Hilltop Golf Course. The only living souls around. Plastered on the prairie like a 4th grader’s paper mache project, the rough and rudimentary nine at Hilltop sits in a remote, cow-flecked coulee. It didn’t take me long to realize I’d stumbled on a special little place; a sand-green Shangri-La.

The conversation drifted between “you’re from what magazine?” and “you should have seen this place in June. It was green. We haven’t had a drop of rain for two months. But this is still one of the best damn ‘sanders’ in Saskatchewan.”

Funny enough, that night it rained. This worked in my favor because the boys (plus Jake, the dog) couldn’t finish combining their wheat fields and were able to meet me in the morning for a spin around the course. And we smacked it around until the cows came home, which was mid-morning, just before coffee break. Duane also gave me a tutorial in terms of how to properly use the rake and the scraper.

“The scrape should extend a few feet beyond the hole,” he said. “Then you putt down the track. A good scrape will give you a smooth surface to putt on. We play the loser of the hole has to rake the green after everyone putts out. It just tidies it up for the next group.”

At noon I hit the road and bounced down gravel grid roads to the north, past buckled barns and abandoned homesteads, through half-dead towns like Abbey, Pennant, and Cabri, where I found the Miry Creek Golf Club. In Kyle, which also had a sweet little “sander” that careened through a ragged and remote prairie setting, things actually seemed healthy. True, there wasn’t a soul in sight, but it was definitely loved and open for business. No dead bodies.

We smacked it around until the cows came home, which was mid-morning, just before coffee break. 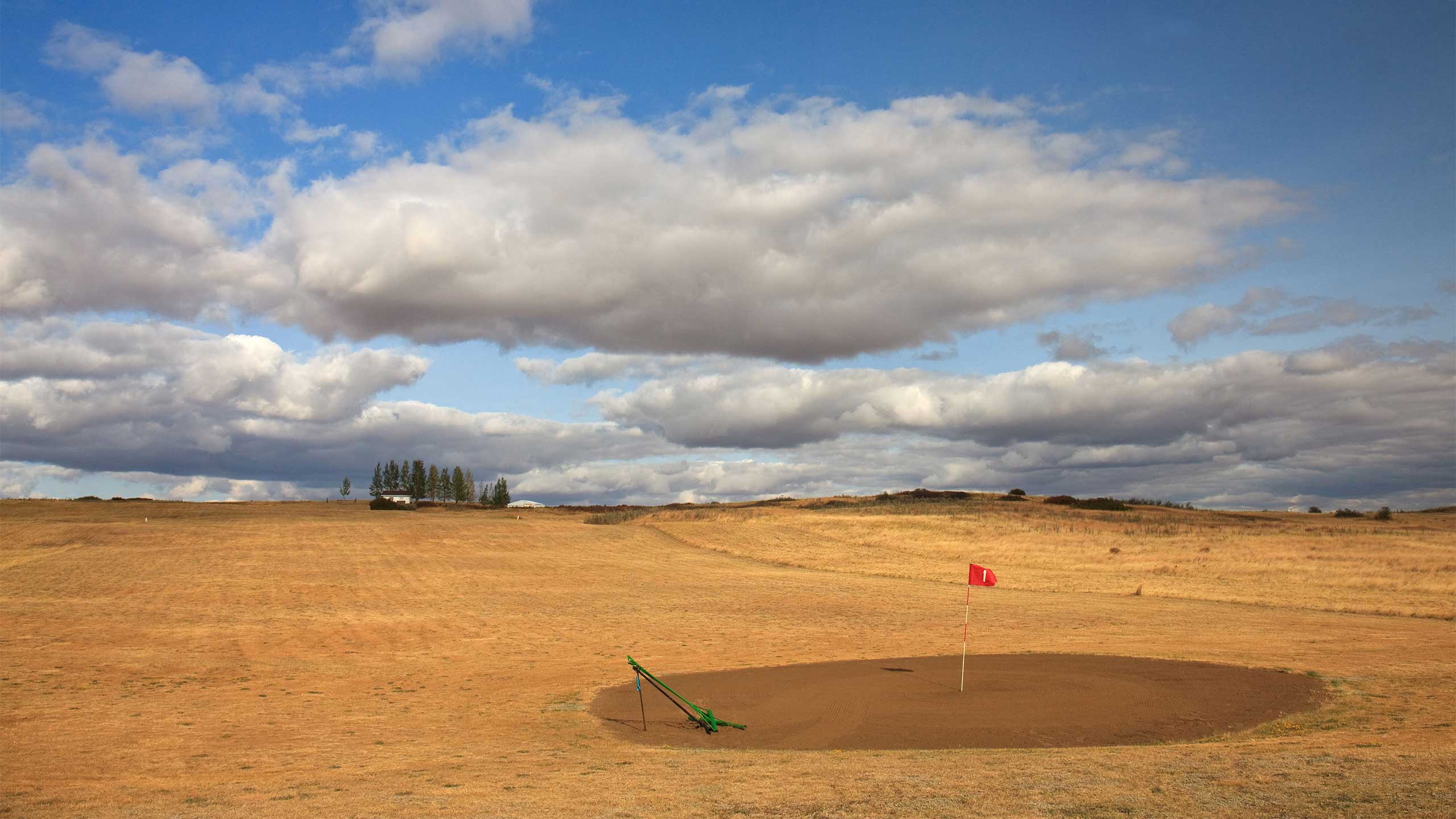 However, the following day things went downhill. In ramshackle towns like Sceptre, Hershel, Alsask, and Stranraer — all places where, allegedly, sand-green courses existed — there was little left to see. However, in Hoosier the course was still there. Kind of. Overpowered by weeds and wind, it was a dismal sight. Rusted benches and ball washers peaked above the prairie grass like periscopes. Inside the abandoned clubhouse shack (I had permission to be there) I found a moth-eaten flagpole and planted it in a “green” for a photo. I figured it was time a flag was flickering on the course again. It had been 10 years.

As I made my way south, I had one more course to check out. I caught wind of a few farmers who were still playing on a unique course near Fox Valley. Apparently the greens were part pea gravel, part artificial turf. I was intrigued.

And, sure enough, a few miles from town — on a brown, sun-baked plot of prime gopher habitat — I stumbled on the Valley View Golf Club. At this point in my journey, considering how many times I had struck out, I considered it a gilded swath of stupendous beauty.

And for about five minutes I had it to myself. Until Howard, the president of the club, suddenly showed up in his pick-up. Apparently he got word that an unpaid golfer might be on the property. As he sped onto the scene I cowered beside my SUV, contemplated making a run for it, and wound up turtling by the ball washer as he approached. He had one thing on his mind.

“You want to play golf?” he asked. “I’ve been looking for someone to play with. Don’t like playing alone. We lost a member last week. A dear friend. He was 84. Played five days a week. We’re down to eight.”

So Howard and I played golf until sunset, then drank beer, smoked cigars, and watched the western sky explode in red-orange fire over a sea of golden wheat. And I set up my tent (as I did every night) 10 feet from the first tee and slept like a baby under a swarm of stars.

Howard showed up at 8 in the morning and wanted to go around again. So we did. At $3 per round, I wasn’t too worried about breaking the bank. (A single adult membership at Valley View is $30 per year and a family membership is $50.)

“So whose idea was this to put a strip of artificial turf through each green?” I asked.

“That was my idea,” he said with a smirk. It worked like a charm. Once on the green you place your ball on the turf, equal distance from the hole, and get a smooth roll to the cup. “We all love it,” he said. “Way cheaper than doing the entire greens. No scraping, no raking, no maintenance.”

On my way home, just a couple of miles south of Fox Valley on a lonely windswept hill, I passed by a graveyard. Fresh mound of dirt. Multiple flower bouquets placed on top. Maybe that’s him, I thought. The much-loved member who was so dearly missed. And I thought, I bet he’s playing golf right now on a perfect course with golden fairways, sublime views, and no rakes in sight. And then I thought, hmm, sounds a lot like Valley View.