How one of golf’s biggest, baddest bunkers just got even scarier 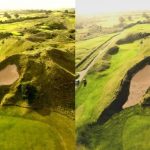 St. Enodoc’s Himalaya bunker before a recent restoration (left) and after (right).

Play enough links golf across the pond and at some point you’ll wind up in a world of sandy hurt.

While some of those hazards are more famous than others (like, say, Hell at the Old Course, or a death trap called the Coffin at Royal Troon), none is more imposing than the brute pictured above, which is said to be the largest bunker in Europe.

Known as the Himalaya bunker, it looms along the right side of the par-4 6th hole of the Church Course at St. Enodoc Golf Club, in England.

The safe strategy is to play around it to the left. But the go-for-glory approach is to try to fly it off the tee.

That’s no slam-dunk feat; the Himalaya measures roughly 60-by-100 feet and tops out at a height of 140 feet (that’s just 10 feet shorter than the Statue of Liberty).

It did, anyway, when the architect James Braid first routed the layout in 1907, threading its holes through the heaving coastal landscape (and around a church that gives St. Enodoc its name).

Golf courses, though, are like living beings. Their natural features age and change, buffeted by winds and rain, overrun by native grasses, trampled by foot traffic. As with so much else, time takes its toll.

Such was the fate of St. Enodoc’s Himalaya bunker. Over the decades, it shrank in stature. Though still impressive, the Mt. Everest of sandy hazards evolved into something closer to K2.

For a glimpse of how the Himalaya bunker morphed through time, check out these before-and-after images, which St. Enodoc management posted recently on the club’s Instagram account.

On the left, you see what the bunker had become before a restoration project that the club took on this winter; on the right is the finished product. Drawing on these photos (below) from the 1930s, which the club shared with GOLF.com, St. Enodoc’s course manager Scott Gibson drafted a design for the bunker’s enlargement. The work was carried out by the club’s grounds crew.

This Monday, when courses in England emerge from their Covid-induced lockdown, golfers at St. Enodoc will have their big, bad bunker back, looking very much as it did a century ago.

Despite its name, it plays as a waste area, which means you can ground your club in it.

But it’s still nowhere you want to be.