Long bunker shots don't need to be scary if you make the necessary adjustments.

The long greenside bunker shot has a reputation of being one of the most difficult shots in golf. But I’ve got good news for you: That’s a false reputation. If you understand the necessary adjustments you need to make in your club selection, setup, and swing, you’ll be getting up and down from these spots more than you ever imagined.

These are the steps you need to master longer greenside bunker shots. 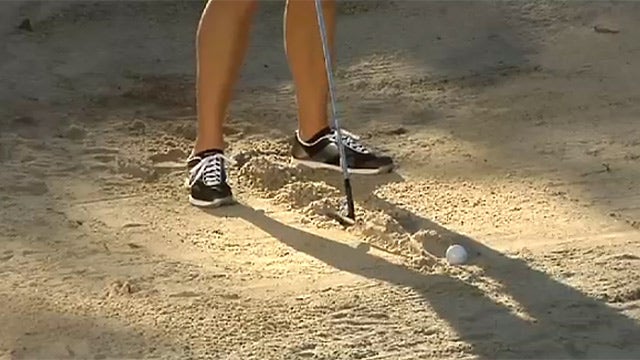 One of the most basic aspects of the setup is also one of the most crucial parts of hitting long bunker shots. If you don’t have your weight balanced over the shot, there’s little hope of being successful any any kind of consistent basis.

There are certain fundamentals that apply to all your greenside sand shots. The most important among them: You have to have your clubhead make contact with the sand before the ball, so it slides under the ball and exits.

To do this, you need to move the ball position forward of center in your stance and aim to have the club enter the sand in the middle of your stance. 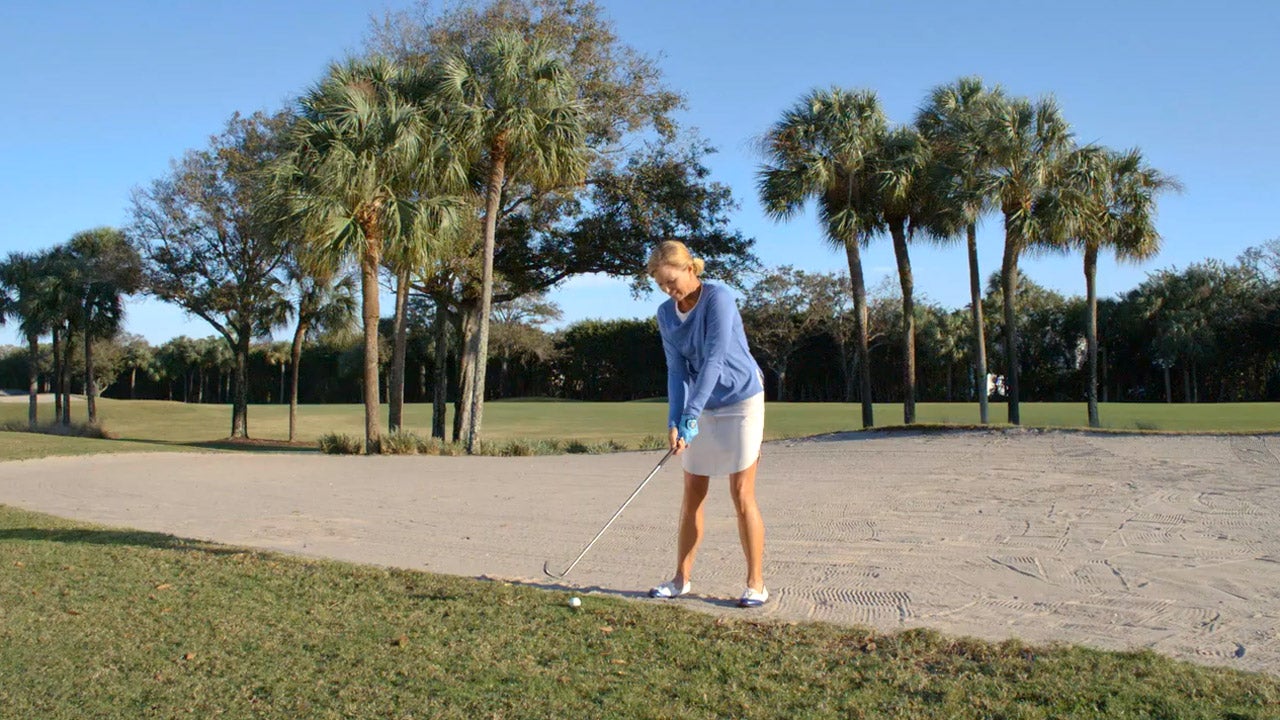 Another common fundamental of all greenside sand shots is to dig your feet into the sand enough to make the soles of your shoes disappear. When you do that, it lowers the bottom of your swing’s arc, which will make the club to go into the sand more easily.

Being able to hit and throw sand out of the bunker should come from a good setup. It’s not something you should have to think about — it’s something that should naturally happen.

We’ve talked a lot about taking a lot of sand so far, but you’ll still need to fight the inclination to lift up. So here’s a swing thought for you: Visualize taking a long divot. This will prevent you from falling back and trying to lift the ball into the air, which will only lead to you catching the golf ball thin.

5. Practice without the golf ball

It can be very helpful to practice bunker shots without a golf ball. Think about making nice long divots, and throwing the sand far with your club.

In my playing days I became a respectable greenside, I did this because I spent a fair amount of time practicing hitting shells out of the bunker using my club. This taught me the right motion. Adding a golf ball was the easy part.

For longer greenside bunker shots, one of the easiest and most obvious things you can do is to simply use a less-lofted wedge, like a gap wedge (typically around 52 degrees). The lesser loft on the wedge, the longer the ball will travel with less effort. If you’ve never used your gap wedge from the sand, you may be amazed at the new shot you have in your arsenal. 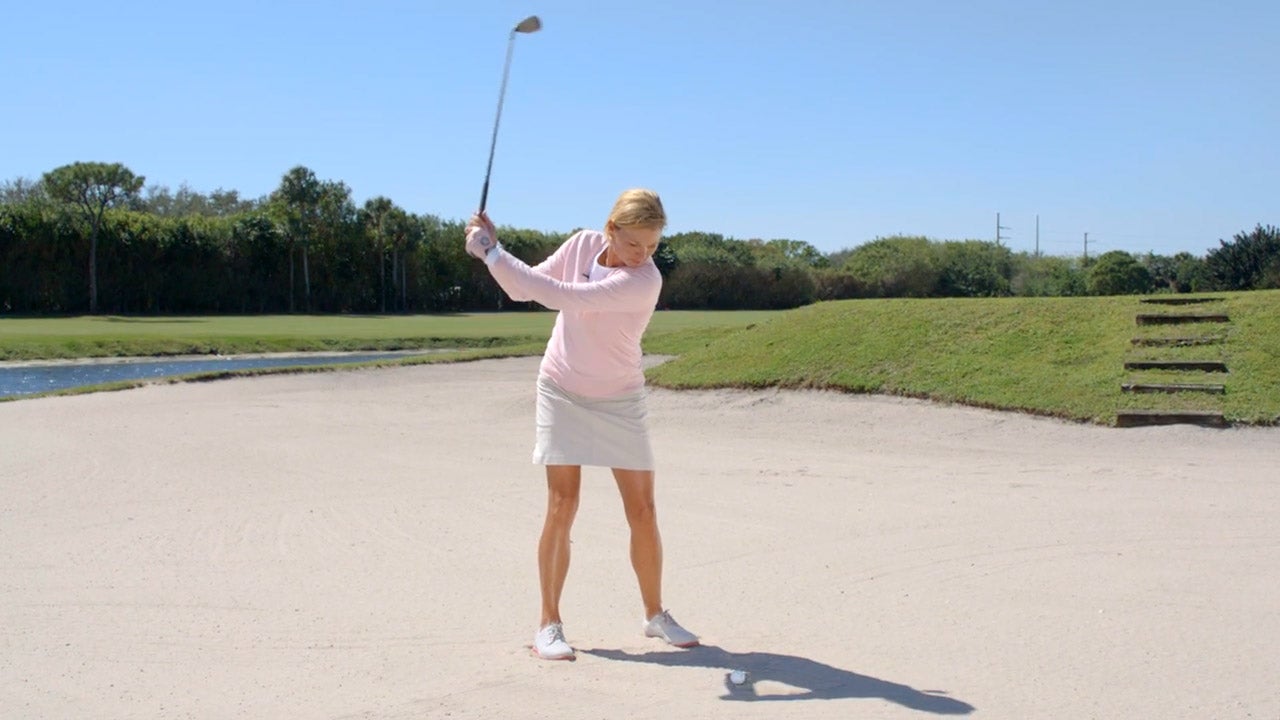 7. Turn around your body

If you need more distance and have already clubbed-up, think of making a bigger backswing by producing a bigger turn more around your body. This will help produce shoulder turn and a more shallow backswing; this greater turn and more shallow approach will also help your golf ball to travel farther while still letting the club slide under the ball.

Usually for greenside bunker shots, you need to open the clubface, which increases the loft and sends the ball higher — but also shorter. If you’re facing a longer greenside shot from a bunker, simply square up the face so the markings on the clubface are facing more of the golf ball. Use the club as it’s designed and use the bounce to your benifit. 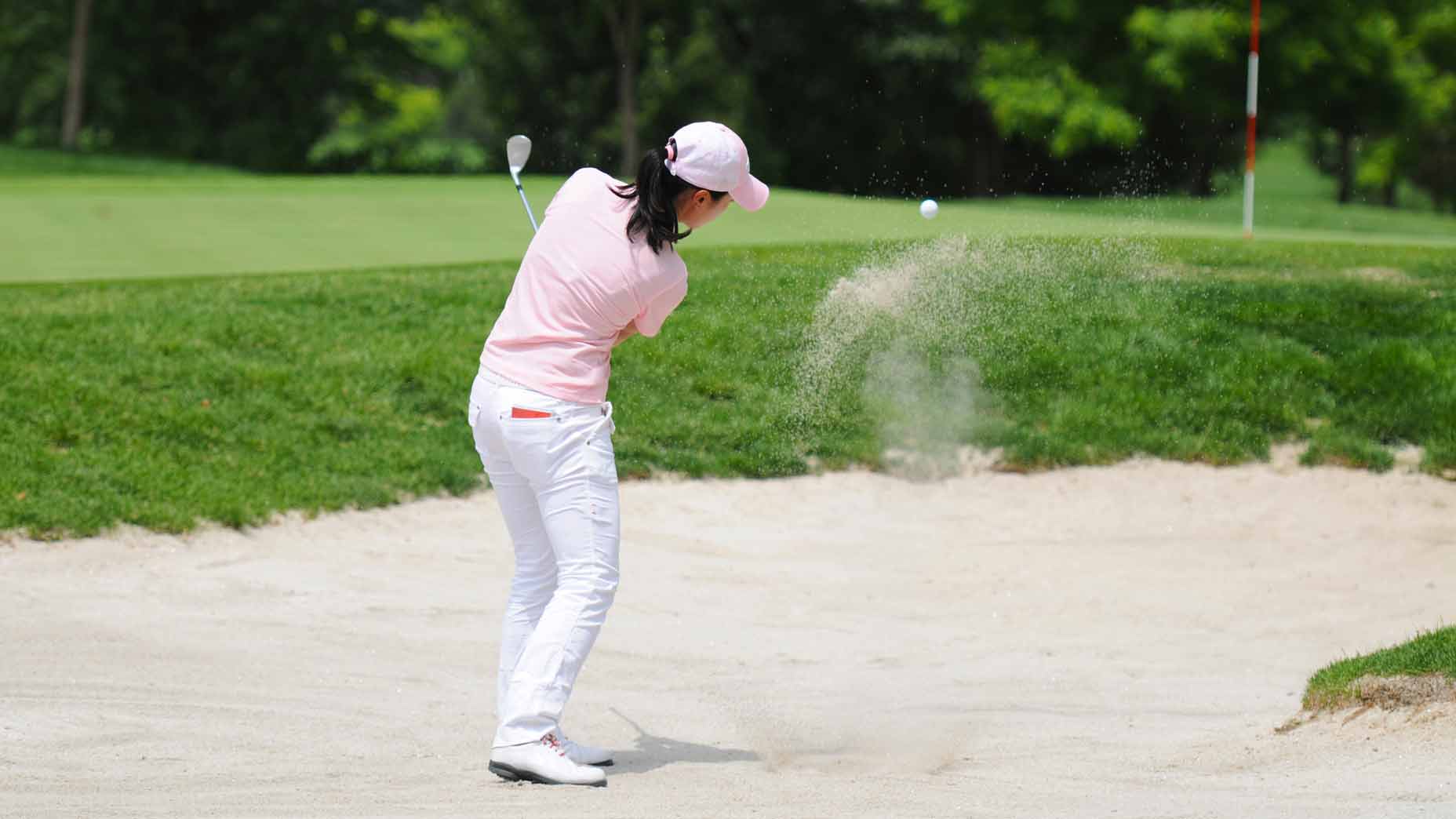 If you’ve made a nice big backswing, it means you’ve created a lot of energy. But all that energy you created will only be turned into speed and power if you use your pivot. If you turn back, you need to turn through.

If you don’t turn through aggressively, you’ll decelerate and catch the ball fat. When you swing through, allow your trail heel to come off the ground. Not only will this help to produce speed but it will also make it much more likely to have a long divot.

Along those lines: A greenside sand shot is like a full swing. You don’t just need to make a full swing, but you need real speed like a full swing. This can seem counterintuitive because you are so close to the target, but the sand acts as a buffer between the clubface and your ball. You need energy to generate enough power to propel the ball and sand across the green.