This surprising chart shows where golf courses are open in the U.S. 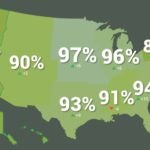 The National Golf Foundation's breakdown by region showed just how many courses were open by the end of last week (May 10).

For weeks, the numbers toggled back and forth. Golf courses were closing, then opening, then closing again. The number of courses in the U.S. available for play hovered around 50 percent. But now? That’s all changed. According to the National Golf Foundation, nearly every course in the U.S. is now open for play — and demand from golfers remains high.

A week ago (May 10), the NGF reported that 91% of courses were open, but that excluded New Hampshire courses (which opened May 11) as well as a number of courses in Vermont, Massachusetts, California and Maryland, which had just opened completely a few days earlier. As a result, the NGF now estimates that number is up to 95%. For every 20 golf courses in the U.S., 19 are open. And that may even be a conservative estimate.

New Hampshire’s opening last Monday meant that all 50 states now allow golf courses to open for play. Washington, D.C.’s courses remain closed, along with courses in New York City and assorted other densely-populated metro areas, but there are no remaining statewide bans on golf.

As the same report pointed out, however, this is hardly “business as usual” for golf courses. A handful of important diversions from the norm:

-Illinois, Washington and New Jersey are only allowing twosomes, with some exceptions for those who share a household.

-Zero states listed allowed golf carts to be shared unless by members of the same household; Massachusetts, Illinois and parts of New York still banned carts altogether except in the case of golfers with disabilities.

How courses deal with other safety risks posed by the coronavirus varies widely state-to-state and course-to-course. Many have removed benches, water coolers, bunker rakes and other objects that could be touched by multiple people. How players hole out also varies course to course, from raised cups to foam linings to clever extraction devices.

While demand remains high, courses face several additional challenges when it comes to generating revenue. Many course restaurants are closed or available only for takeout. While more than 50 percent of pro shops are now open for business, most have restrictions about how many people can enter. And limitations on group size and tee time spacing mean there are fewer golfers available to spend additional money at the course.

The question of what constitutes a golf facility has also been raised; in Minnesota, one operator is allowed to open his driving range but not his miniature golf course — but is doing so anyway, citing a “very spread out” course and his ability to disinfect clubs after use.

A common theme across jurisdictions seems to be cautious optimism. When it comes to social distancing, golf remains one of the safest outdoor sports, and eager players are heading to the course in droves. On the back end, owners and operators are doing their best to make sure things add up on the business side, too.

You can read the complete NGF forecast here.