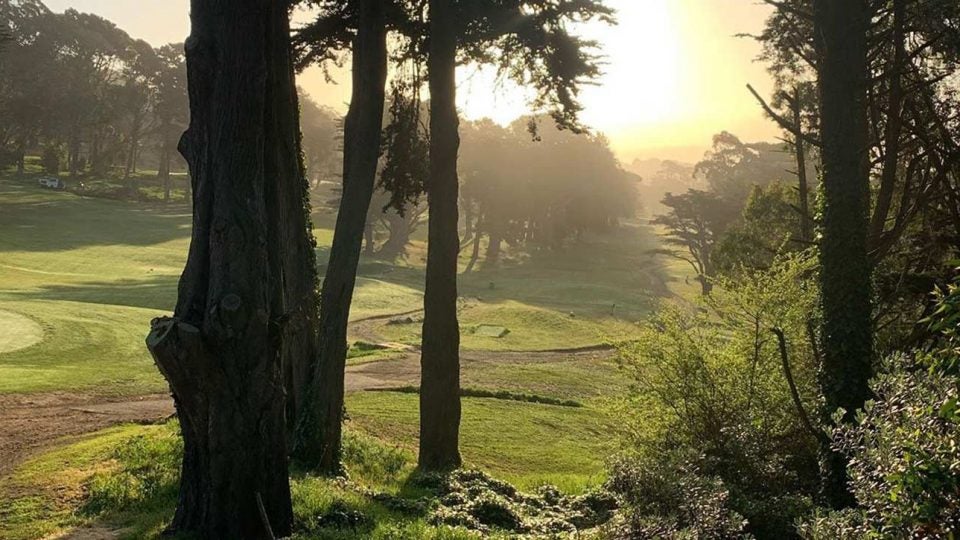 Coronavirus closures have affected courses across the country, including Gleneagles in San Francisco.
Instagram/@parking.lot.pro

This is part of our Muni Monday series, spotlighting stories from the world of city- and county-owned golf courses around the world. This week, Josh Sens takes us to Gleneagles in San Francisco. Got a muni story that needs telling? Send tips to Dylan Dethier or to munimondays@gmail.com.

Love will make a man do crazy things. If his love is golf? Crazier still.

Consider the story of Tom Hsieh.

In 2004, Hsieh (pronounced Shay) was leading a contented life, happily married with a newborn daughter and a steady job as a San Francisco-based political consultant.

His schedule was hectic, but his heart was light, and he might have simply kept on keeping on had he not been given word that his favorite local muni was in need.

Like many of the hardest of hardcore San Francisco golfers, Hsieh had cut his teeth at Gleneagles, a nine-hole track just south of the city with a scrappy look and a sneaky pedigree.

Its designer was Jack Fleming, a protégé of Alister Mackenzie, and its origins dated to 1962, which was maybe not the Golden Age of golf course architecture but was a golden age for golf itself. In those days, with Arnold Palmer at the height of his powers, a populist wave had swept across the game, a surge that was felt forcefully in San Francisco. Munis, though plentiful, were also packed. That included Lincoln Park, the hilly 18-holer where George Archer had sharpened his short game, and grand, cypress-shaded Harding Park, where Ken Venturi’s parents worked the pro shop.

“It was like a secret hideaway,” Tom Hsieh said. What the course lacked in glamor, it made up for in grit. Money games were legion. It was a hustler’s hangout, the kind of place where a grizzled guy in denim with a homemade swing would trounce a college smoothie 7-and-6. With quirky, canted fairways and persistent crosswinds, the course conceded little. Lee Trevino is said to have called it one of the toughest nines he ever played. -Josh Sens, GOLF.com

Short on golf supply in relation to demand, the city unloosed Fleming along a rolling swatch of land, on a site notable for its bay views and the difficulties it took to find. Because the property was part of John McLaren Park, the city, in a burst of civic creativity, christened the layout McLaren Park Golf Course (a name that would later change).

“It was so far from every course, in a neighborhood I’d never had any other reason to go to, with an unmarked little driveway as an entrance that you had to know about or else you’d miss it,” Hsieh says. “It was like a secret hideaway.”

It was also anything but slick. The low-slung clubhouse looked like a hobbit hovel. The outer edges of the routing rubbed against a housing project, where kids were known to hop the fence and steal off with otherwise perfectly good shots.

But what the course lacked in glamor, it made up for in grit. Money games were legion. It was a hustler’s hangout, the kind of place where a grizzled guy in denim with a homemade swing would trounce a college smoothie 7-and-6. With quirky, canted fairways and persistent crosswinds, the course conceded little. Lee Trevino is said to have called it one of the toughest nines he ever played.

As a business, it did well.

By the 1970s, with the golf boom waning and profits thinning, the city was ready to let its layout in McLaren Park go to seed. Enter a savior named Erik De Lambert, San Francisco character out of central casting who earned his keep as both a hotel maitre d’ and a lighting technician at a strip club.

Swedish by birth, De Lambert fancied himself a Scotsman, and he had a tweed jacket, an adoptive brogue and a handlebar mustache to prove it. Though he’d never run a golf course, De Lambert offered to take over at McLaren Park, which he did, bringing a host of changes with him.

He fine-tuned course conditions, built a moody little pub inside the clubhouse and renamed the place Gleneagles, in honor of his favorite course in Scotland. He also enforced stringent rules, ejecting players on the spot if they failed to replace divots in the fairway or pitch-marks on the greens.

“He was part superintendent, part soup Nazi,” Hsieh says. “He did the kind of things you couldn’t get away with nowadays with Yelp reviews.”

This was the Gleneagles Hsieh fell for as kid, and the one he kept returning to in adulthood, until 2004, when De Lambert retired. The lease was up, and margins on the property were vanishingly lean.

Like De Lambert before him, Hsieh had no experience running a golf course. But no professional course operators wanted in.

“It was totally silly, completely ridiculous,” Hsieh says. “But this moment of passion overwhelmed me and I submitted a bid.”

With that sudden act of irrationality, Hsieh embraced a life of unpredictability, of lean balance sheets and byzantine leases, of withering droughts and economic downturns, of rising water bills and dwindling revenues—a business that rarely makes financial sense but which, after 16 years, Hsieh, who is 54, can’t think of anything he’d want to trade it for.

This is a time that tests the strongest bonds. In recent weeks, even as the clouds of crisis grew, it seemed that golf might remain a refuge, an open-air escape that could be pursued safely. But no more. The shelter-in-place order that came down on Monday for San Francisco and five surrounding counties (and which since has been applied to the entire state) required the closure of all non-essential businesses, and no matter what you think about golf’s essentialness, this was not a mandate open to debate.

As with so much else, the fate of Gleneagles is now uncertain, and Hsieh is trying to figure how it might survive. A provision in the government shutdown allows staff to stay on duty at businesses with perishable goods, and a golf course is nothing if not perishable. But with bills piling up and no revenue coming in, Hsieh has been able to keep only two part-time positions, one a maintenance worker, the other a facility manager. He’s been forced to lay off his other seven employees.

Tomorrow is an unknown, as is the day after. The shelter-in-place order is through April 7, but indications are that it might be extended.

“The entire world is upside down, and we don’t know what the future holds,” Hsieh says. “So like everybody else, we’re just trying to take things day by day.”

A sound mantra for coping with insanity.

Got a muni story that needs telling? Send tips to Dylan Dethier or to munimondays@gmail.com. Check us out on Instagram, too!