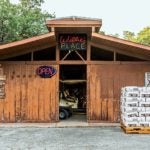 The cart barn at Pedernales CC has the same perfectly weathered patina as its well-traveled owner.

Pedernales Country Club isn’t the most famous course in Spicewood, Texas, a distinction that belongs to nearby Austin Golf Club, nor does this modest nine-holer boast its neighbor’s pristine conditioning. In a sense, though, they’re a duet, each branded by a local Lone Star legend: AGC was codesigned by Ben Crenshaw, and PCC is owned by the Red Headed Stranger himself, Willie Nelson.

The club, located 30 miles northwest of Austin, opened in 1968 as Briarcliff Yacht and Golf Club. A decade later, the place was deep in red numbers — in the non-golf, losing-money sense. Nelson purchased the bankrupt property in 1979 for $250,000.

“I’ve always wanted a golf course where I could set the pars,” he quipped at the time.

Along with a name change — Pedernales is the Colorado River tributary on which the course sits — came a change of tune. Out went the country club vibe and in came, well, something more befitting a megastar of outlaw music. Nelson commissioned a 54,000-square-foot complex on the property’s highest hill for his living quarters and encouraged the rest of his entourage to live and play throughout the grounds. He turned the club’s restaurant into a recording studio, where the output has included Pancho & Lefty (1983), his chart-topping honky-tonk LP with pal Merle Haggard, and tracks for Neil Young’s sublime Old Ways.

When Nelson — an avid player — wasn’t making music, golf was always on his mind. But his own financial woes saw the club seized by the IRS in ’91. His compadre, longtime UT football coach Darrell Royal, tried to buy Pedernales for safekeeping, but the feds foiled the plan and sold it to an outside investor. Nelson is among celebrity leaders in bounce-backs, however, and with help from another friend he repurchased the place a year later.

Today, Pedernales is open for daily-fee play, and its owner’s renegade spirit can be seen in one of the club’s many cheeky rules: “No more than 12 in your foursome.” If you’ve got the money, honey, we’ve got the tee time.