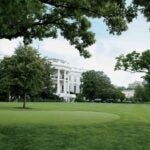 The People’s Putting Green today, as created by RTJ Jr. for Bill Clinton.

Office workers — when they are in the office — stay sane by amusing themselves between intense bits of business. They trade jokes, walk around and banter with colleagues, sneak in a little fantasy football. Oval Office workers aren’t much different. Like other stressed-out suits, they need intermittent chill moments to keep it together. Besides the convenient free air travel, a sweet perk of being president is the putting green about 20 paces southeast from the Oval Office door.

The current iteration was put in place by Robert Trent Jones Jr. at the behest of Bill Clinton. The idea for a green itself took root when devoted hacker Dwight Eisenhower lived at 1600 Pennsylvania Avenue. His green — created, along with two par 3s at Camp David, by RTJ Sr. — was removed by Richard Nixon for unknown reasons. When Clinton asked Jones Jr. to restore the green, they chose the spot of Ike’s original dance floor.

The green “isn’t very big — maybe 2,000 square feet,” says Jones, and is slightly crowned. One notable difference from Eisenhower’s original is the lack of a bunker. According to Jones, that’s because the Secret Service feared Clinton would skull a wedge shot and send it flying through a White House window — thus becoming the first president to attack the People’s House from the People’s Putting Green.

Donald Trump is a famously passionate golfer. (It’s unknown if he ever rolled the rock here.) President Biden also enjoys the game. But among all presidents, Bush the Elder and his son have the most distinguished golf pedigree, with bloodlines that extend to the early days of the USGA and the founding of the Walker Cup. The Jones family has long been accustomed to rubbing elbows with world leaders, but even Trent Jones Jr. was briefly awed by the power of the presidency while putting at the White House with Bush 43.

“I holed a putt and reached to get the ball when suddenly the president said, ‘Don’t!’ ” Jones recalled. “He’s the president, so I did as I was told. I backed away, and Barney, the family’s Scottish terrier, trotted out and stuck his snout in the hole to retrieve the ball.”

Rory McIlroy reflects on missed 1-footer: 'I thought about it for a long time'