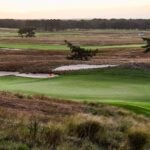 A view of Shinnecock Hills on Long Island.

For every great course that made GOLF’s 2020-21 ranking of the Top 100 Courses in the U.S., dozens of more must-plays were left on the outside looking in — including at least a handful in your home state. Some of these designs just missed out on a Top 100 nomination, others finished deeper down the ranking, but all are worthy of your time. To shed light on the best courses in every state, we broke out the full results of our Top 100 Courses polling into state-by-state lists. Here’s a closer look at New York.

New York golf by the numbers:

Gear up for your next round in New York Venue for five U.S. Opens since 1986, most recently in 2018, this is William Flynn’s undisputed design masterpiece. Apart from being handed a magnificent piece of land upon which to work, Flynn was given something else nearly as valuable: time. Work commenced in 1928 and the course didn’t open until 1931. True, the Great Depression commenced during construction but the grace with which the holes flow across the property is a tribute to the hands-on, slow-build process.

NGLA, or “National,” as it’s known, brought Seth Raynor and C.B. Macdonald together for the first time and what they created still stands as a marvel of strategic design. Some of its template holes, including the Alps 3rd, the Redan 4th, the Short 6th and the Leven 17th, are arguably superior to their namesake holes in the United Kingdom that Macdonald copied. Legendary golf writer Bernard Darwin summed it up nicely when he opined, “The National Links is a truly great course; even as I write I feel my allegiance to Westward Ho!, to Hoylake, to St. Andrews tottering to its fall.”

Accessible by ferry or air, this exclusive retreat off the Connecticut coast is populated by the oldest of the Old Money crowd, many of whom still enjoy hoofing it. Why wouldn’t they, given the classic Seth Raynor design that tracks along the island’s northeast edge, the delightful tumbling terrain and the spectacular views of Long Island Sound. Are the 3rd, 4th and 5th holes as intoxicating as any three consecutive holes on this list? It’s a question worth considering.

Tree-dotted dunes, open meadows and bluff-top views of Long Island Sound highlight play at this 2003 Bill Coore-Ben Crenshaw design. Phil Mickelson opined that it is his favorite modern course. Holes such as the par-5 14th call to mind an East Coast version of Cypress Point. Constant refinements, no matter how small, have helped this course continually power up the rankings. From a presentation perspective, few courses are as dialed-in.

Hale Irwin survived the 1974 “Massacre at Winged Foot” U.S. Open to win at seven over par. Geoff Ogilvy didn’t fare much better in 2006, when his five-over total took home the trophy. Mark Brooks, 1996 PGA champion, summed up this Golden Age A.W. Tillinghast design this way: “There are probably six hard holes, six really hard holes and six impossible holes.” Frighteningly contoured, pear-shaped greens, cavernous bunkers and a procession of rugged par-4s define the trouble here. On a “difficulty” scale of 1 to 10, Jack Nicklaus once rated the West course a 12. That said, Gil Hanse’s recent, stunning expansion of all the green pads has brought back an element of creativity with which few parkland courses can contend, all of which was on display at the 2020 U.S. Open won by Bryson DeChambeau.

Devereux Emmet and Walter Travis share credit for this old-school design that plays across Hempstead Plain on Long Island. The water is 10 miles both north and south, so sea breezes are a frequent companion. Laurie Auchterlonie won the 1902 U.S. Open here with record scores, owing to the debut of the longer, more durable Haskell ball. Garden City’s tilted greens, like the 10th and 15th, are lay-of-the-land architecture at its highest form.

Recently restored by Coore & Crenshaw, Maidstone’s glorious edge-of-the-Atlantic location is once again fully evident. Maintaining coastal dunes is an art form: expose too much sand and it blows away; cover it up and you lose a sense of place. Maidstone has struck the perfect balance. Adding to the pleasure of its romantic location is an exceptional set of Willie and John Park greens, many of which feature dramatic false fronts. A dream course to play on a regular basis.

The Black intimidates golfers with a sign at the 1st tee that recommends the course “only for highly skilled golfers.” Among the highly skilled? Tiger Woods, who won the 2002 “People’s Open,” as that U.S. Open came to be known. Woods was the only golfer to break par for 72 holes, owing to rugged, uphill par-4s, massive bunkers and the wrist-fracturing rough found on this Rees Jones-restored A.W. Tillinghast layout. The Black is one of the great routings, highlighted by the masterful way Tillinghast placed the fairways and greens from the 2nd hole in a valley all the way through the dogleg left 9th. The par-5 4th and its iconic cross-bunkering is a world-beater.

This Westchester County course has always enjoyed a spectacular component to it, courtesy of breathtaking views of the Hudson River. What it lacked was playing interest from 50 yards and in to its greens. That changed in 2016 when Gil Hanse embarked on a two-year project to imbue the greens with a C.B. Macdonald flair that, well, even Macdonald would appreciate.

This quiet club across the street from Winged Foot has counted Jack Nicklaus and Pete Dye as admirers. Its outstanding cluster of gently rolling par-4s, notably the 6th and the 11th, provided a terrific canvas for amateurs such as Justin Rose and Jason Gore in the 1997 Walker Cup. Dating to 1916, the course was made over by A.W. Tillinghast in 1926 and Gil Hanse’s restoration this past decade has the course at peak. The par-3 9th is one of the hidden gem one-shotters in the Northeast, though it may take a few rounds to figure out why.

This classic parkland layout has hosted multiple majors and a Ryder Cup. A recent renovation made the suburban Rochester marvel even better, bringing it back in line with Donald Ross’s original design. Architect Andrew Green overhauled the 5th, 6th and 15th holes, cut back trees and re-worked greens throughout the course. The new drainage system allows for faster putting surfaces — expect higher scores (and better sightlines) at the 2023 PGA Championship.

Neither as long nor as tough as its illustrious West sibling, the East enjoys its own devoted fanbase for its variety and the encouraging manner in which ground game options are now presented. Great attention has been paid to the mow lines, with short tight fairway grass on the high side of the entrance to all the greens. The dirty secret at Winged Foot is that more than a few consider the 13th and 17th as the best par-3s on the property, an outlandish claim until you play them.

Fresh off his work at National Golf Links of America, C.B. Macdonald started adding to his repertoire of template designs at this golf-meets-Gatsby Long Island club. The Biarritz and Knoll holes made their debut here, for instance. Among architecture buffs, Piping Rock’s Knoll 13th with its raised green that falls off starkly on all sides remains its finest iteration. The front nine wraps around a former polo field while the back heads into the hillier portion of the property. The course is also home to one of Macdonald’s finest par 5s, the 6th, which features a bedeviling back plateau ringed by trouble.

An epic combination of parkland and seaside golf, this McDonald-Raynor classic serves up a greatest hits of the duo’s favorite design elements. After a solid but sedate tree-lined opening five holes, the course explodes into glory at the spectacular 6th, which plays into a famous reverse Redan green. From there, players hit down to Long Island Sound. Hole Nos. 10 through 14 wind through sand and water, an unforgettable trip to the beach highlighted by a massive island Biarritz green.

With so much content and information available in 2020, stumbling across a “hidden gem” has become progressively more difficult. Yet, this Ross course 30 minutes north of Saratoga Springs was off the radar as recently as five years ago. Situated between the Adirondacks and Green Mountains, the short par-4 5th with its “top hat” green through the par-3 9th to a Volcano green complex are as good a series of Ross holes as you’ll find. The excitement doesn’t let up with the course finishing with its penultimate hole across hilly land to a green in a saddle and a par-3 finisher played across the edge of a lake.

In a pairing of unique talents, Tom Doak and Jack Nicklaus teamed up to build this high-end, private course in one of the world’s most hallowed golf zip codes, next door to National Golf Links and Shinnecock Hills. The design reflects each man’s influence, including boldly contoured greens and rough-cut sandy hazards. While there’s no ignoring the prime locale, which offers several sweeping views of Great Peconic Bay, the elegance of holes like the uphill par-5 9th underscore the fact that Sebonack’s artistry could hold up anywhere.

Course spotlight: Atlantic (Bridgehampton), ranked No. 19 in New York. In one of the toughest markets in the world, Rees Jones set out to create an artificial golf course in a potato field. How many routings did the course have in the first few years? Bobby Ranum, the recently retired superintendent, could be the best I have ever seen. Bobby, along with the head pro and Rees, slowly evolved Atlantic over time, removing artificial mounding and adding central hazards that greatly increased strategy. Atlantic can now hold its head high in that very high-rent neighborhood. — GOLF Top 100 Course Rater