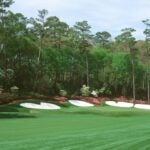 Augusta National is Alister MacKenzie's masterpiece, and also an important addition to GOLF's Top 100 Courses in the U.S. list.

Golf fans, you can breathe. After months of consternation, postponements and cancellations, we’ve made it. Yes, as golfers descend upon Augusta, Ga. for the first time in 19 months, we can say confidently that it’s finally Masters week.

There are few better landmarks on the golf calendar than Masters week. The tournament is bigger than the sport, like the Super Bowl in the NFL or the Rose Bowl in College Football.

It’s also true that there are few better landmarks in golf than Augusta National. The club is among the sport’s most elite, most architecturally thought-provoking, and most beautiful. It is also perhaps the world’s most sought-after tee time.

Yet, despite its exclusivity, GOLF’s Top 100 Course Raters and Panelists managed to find their way to Augusta National frequently enough to pass their impartial judgment upon Alister MacKenzie and Bobby Jones’ architectural opus.

In GOLF’s ranking of the Top 100 Courses in the U.S., the Masters home once again finds itself near the very top of the list. In the 2020/2021 iteration of our rankings, Augusta National moved to No. 6, down three spots from our last ranking.

As for the course itself, here’s what our raters had to say:

“Augusta National is the vision of Bobby Jones and his chosen architect, Alister MacKenzie. Both intended for Augusta National to reflect the spirit and strategic options of the Old Course at St. Andrews, the course that they admired most. Nearly every hole at St. Andrews and Augusta National provides a safe route to the green and also a riskier one. Recent tree-planting and narrowing of corridors stands in contrast to that shared vision and is at odds with what has transpired at other Golden Age cornerstone designs this century, proving what a tough position ANGC finds itself in continuing to test the world’s best players in golf’s most anticipated event. Regardless, the course’s staggering beauty and Masters tradition remain unlike any other.”

With yet another ranking near the top of our Top 100 Courses list, it seems Augusta National has added itself to a second tradition unlike any other. Though admittedly, this one doesn’t come with a blazer.

To check out the rest of GOLF’s Top 100 Courses in the U.S. ranking, including our inaugural ranking of the 50 best courses in every region, check out the links below.

Top 50 Courses in the Northeast

Top 50 Courses in the Southeast

Top 50 Courses in the Midwest

Top 50 Courses in the West