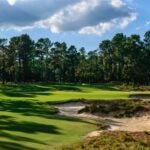 Pinehurst No. 2 in the Village of Pinehurst, N.C.

Pine Valley. Cypress Point. Bethpage Black. They are the most glorious golf courses in the world — but also capable of producing some inglorious moments. In honor of GOLF’s recent release of the Top 100 Courses in the World, we asked our staffers to swallow their pride and share their most humbling, embarrassing or chokiest moment on a Top 100 course. There is a story of a near-brawl. A score of 17 — yes, on one hole. And a newfound fear of shorts. We broke this series into three parts, with Part II below. Part I is here, and Part III is here.

At Pinehurst No. 2, the par-5 5th is considered one of the most iconic holes on the entire Pinehurst property. Martin Kaymer eagled it en route to a U.S. Open victory in 2014, when it played as the easiest hole of the tournament. With this in mind after a good drive, I went for the green in two. But the key to success on the 5th, they say, is to make sure you do not go left of the green. Predictably, that’s exactly where I ended up.

In my hubris, I was looking forward to my two-putt birdie from just off the left side of the green. They tell you not to chip from anywhere around the greens on No. 2, so while looking up at a massive slope and a short-sided pin, I pull out my putter and judge what I believe should be a moderately hard-hit putt. The ball went all the way up the slope, died at the top and quickly ended up back at my feet. Now I’m looking at a three-putt par.

With the definition of insanity nowhere near the top of my mind, I sent up another putt that ended back farther below my feet than where I started. Hitting five and in some frustration, I rocket a third putt from the same location — past the hill, past the pin, off the green. Long story short, I went from pin-high in two to finishing with a seven. The house where Donald Ross lived at Pinehurst is in sight from the 5th green, just some 100 yards away. I often wonder if he would’ve enjoyed my five-putt. — Connor Federico

I was just at Champions Retreat (yes, I know this is not a Top 100, but it’s still super nice, so I’m going to count it) and was playing a quick nine right after flying in. Graciously, the staff grabbed my clubs directly from my travel bag and put them on a cart on my behalf. But when I made my way down to the area where the carts were, I noticed my Miura irons were still wearing their bright orange iron covers that I put on for air travel safety purposes ONLY. They were given to me as a joke/gift (I didn’t choose the color), but I do get nervous about my clubs when flying, so I usually throw them on for extra protection. The whole ordeal ended up being hilarious once I explained myself. I’m sure everyone I played with was quite concerned about the round ahead when they saw my clubs before meeting me. (Any Top 100 courses that want to invite me to play and potentially embarrass myself, my DMs are open.) — Emily Haas

I was about to get married, and as a congratulations present, my soon-to-be best man called in the favor of all favors and got us a round at Cypress Point. Obviously, I was impossibly excited about the prospect. It’s the kind of round you look forward to for weeks and months in advance. When the time finally came, it was peak golf weather, and the forecast for the big day showed a hot day incoming. I’m usually a trousers guy, but at the last minute, I had a rush of blood to the head and decided to embrace California casual style on its signature course. When in Rome, after all.

And so, on came the shorts, and off to the course we went. We were the first group due off on the tee. Walking from the car to the clubhouse, I stopped for a moment and looked out onto the first, sweeping down through the dunes alongside the ocean, thinking of what was to come, taking in the glory of golf in its rugged, essential form. Right up until the moment I was snapped out of my bliss with a gentle tap on the shoulder from a member of the club’s staff, informing me quietly that there were no shorts allowed at Cypress Point. I looked down at my exposed shins, and then up and at the eyes of fellow golfers judging me. I went inside and bought a baggy pair of trousers, hit my drive down the first and scurried off the tee fast enough. I died a little inside that day and am still so traumatized I think about it every time I see a pair of golf shorts.

The only consolation I have from that cringeworthy moment is the ability to pass along a valuable lesson to you: When in doubt — even if it’s the slightest whiff of a doubt — go with trousers. — Luke Kerr-Dineen

A near-top and a full slice — in front of hundreds

It’s hard to believe it’s been 20 years since I was standing on the first tee at Royal County Down (World No. 6) with my best mate, DeNunz. We happened to be sharing the tee with Tom Wargo, 1994 Senior British Open champ and a no-nonsense individual. The fairways were lined with spectators, eager to see a major winner tee off in the pro-am for the 2001 Senior Open.

To say we were nervous rather understates the emotion. It was one of those deals where your hand is shaking as you attempt to tee the ball. It didn’t help matters that we had been up late the night before crawling around too many of Northern Ireland’s finest pubs.

The first hole at County Down’s Championship course is a skinny, straightaway par-5 of about 550 yards; a walk in the park for a couple of hungover hackers. All 550 of those yards run along Dundrum Bay close by on the right-hand side.

As it happened, I was to go first. I’m not exaggerating when I tell you I just wanted to make contact. Standing behind the ball, it was hard to breathe, let alone focus on making a good swing. I gathered myself, stepped up to the ball and made a slash at it. I caught the top of the ball at the very bottom of the driver face, which sent it weakly down the center of the fairway about 200 yards. It never got higher than three feet off the ground. The spectators were kind, though, giving me their most sincere golf claps. I had survived.

DeNunz was next, and as he passed me on the way to the tee box, he whispered under his breath, “Bastard.”

DeNunz is a much better player than me, but even he was nervous. He settled in behind the ball, took his driver back way past parallel, as he’s prone to do, and unleashed the mightiest of slices. As his ball sailed well into the bay, the spectators let out a collective, “Ohhhhh.”

Wargo was a good sport about it, although I’m sure he figured at that point, he was in for a long day. — John Ledesma

Don’t read this if you have a light stomach

I went into this story in depth in a personal ranking story I wrote back in 2019, but to date, there’s still nothing that tops it. In short, a series of unfortunate events (and a bout of food poisoning) during an epic father-daughter golf trip to Monterey resulted in me puking in the bushes on the first tee at Pebble Beach prior to teeing off. The good news? After the ill-timed barf, I felt great for the remainder of our bucket-list round. — Jessica Marksbury

I was playing golf. But he wanted to fight.

“We’re not going anywhere until I have words with that guy.”

And that’s how the fifth hole of my first-ever round on a Top 100 course went. My friend and I were playing golf. But our playing partner wanted to fight.

On a trip to New York about 15 years ago, we had incredibly snagged a walk-on tee time to Bethpage Black, were grouped up and were off. As you can figure by the ranking (No. 52), the golf was memorable, but it was a moment on a hole on the front nine that was unforgettable. We were maybe a good 350 yards out — I think someone had topped a second shot — and ready to hit when a ball from the tee box cleared us by about 50 yards. On the one hand, this was a 400-yard-plus pop, which my friend and I were floored by. On the other hand, our playing partner, after saying the first paragraph above, wanted to deck the player.

So we waited. (Admittedly, I’m not sure of the proper etiquette of: Player hits into you, unknown playing partner may want to fight about it.)

“Hey, you need to yell something or wait,” our guy said. “One of us could’ve gotten (obscenity) hurt.”

He was also, maybe, 16 years old. Which made it even more prodigious to us.

My friend and I tried to defuse things — ”No, no, no, all good. Dude, YOU HIT A 400-YARD DRIVE. We’re honestly impressed.” A few more words followed, no fists were thrown, and play resumed.

Of course, the one question I still have from that day — and one I’m hoping to have answered by writing this — is this: Which future pro was that? — Nick Piastowski