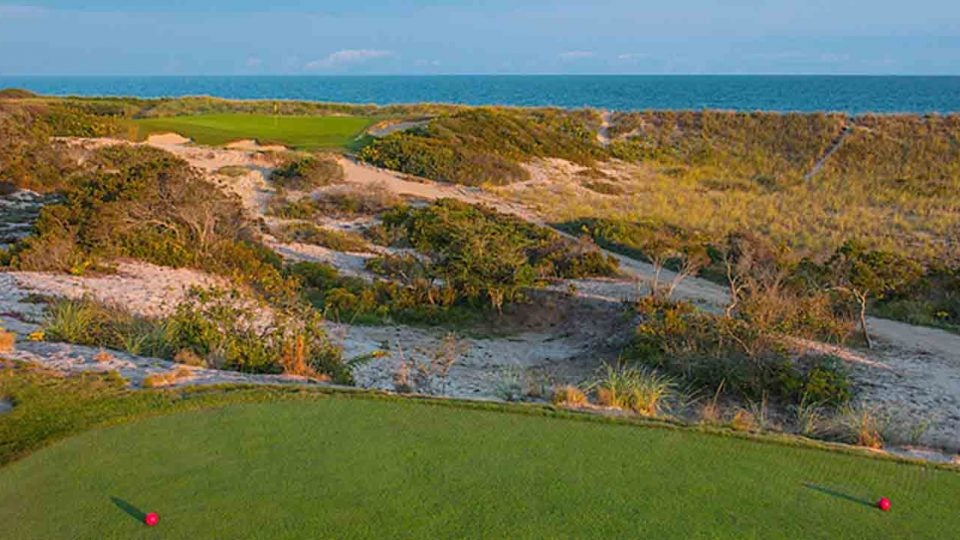 The 14th hole at Maidstone on Long Island.
LC Lambrecht

The release of GOLF’s newest ranking of the Top 100 Courses in the World is always met with great anticipation. Anyone who loves the game can appreciate having the chance to play a course that is deemed one of the best in the world by people who know what they’re talking about. But I’m no architecture aficionado, and to be brutally honest, I’ve played several top-ranked courses that just didn’t do it for me.

There’s so much that goes into how you feel about a golf course, for better or for worse: the weather, the occasion, the company, your own play. I tend to agree with my colleague Alan Shipnuck, who has said, and I’m paraphrasing, that he judges a course’s ranking based on which one he’d prefer to play over the other. I love that logic. Course preference is a deeply personal thing. I’ve played 15 courses on our current Top 100 ranking, but only four appear on my top 10 list, which I took pains to rank, and is unabashedly skewed by my entirely subjective experience of each and every round. Here they are, including what I think is a pretty epic story about my round at my No. 3 pick, which I hope you’ll enjoy.

I played Baltusrol with my husband, Paul, on a stunning September afternoon more than a handful of years ago. The weather was absolutely perfect — abundant sunshine, and hardly a breath of wind. I remember we both played well, and it was just one of those perfect, totally enjoyable days that lingers on in your memory.

Another course that I absolutely loved right away. I played Edgewood with my dad on a family vacation to Lake Tahoe. I was still just a kid, but it was one of the first times I got to tee it up on a renowned track. Again, a perfect day, the course was immaculate, and I had a blast with my dad. I haven’t played it since, but will always love it for the one time I did.

Anyone who has ever played a round of golf in Hawaii knows that it’s completely intoxicating. My husband and I played  Wailea’s Emerald course on our honeymoon, and it was a stunningly perfect day. (Starting to notice a trend here? I am unashamed to say I’m a fair-weather golfer.) All three of Wailea’s courses are gorgeous, but the Emerald is a beautiful, perfect, enjoyable course to play on vacation, and I’d recommend it to anyone. 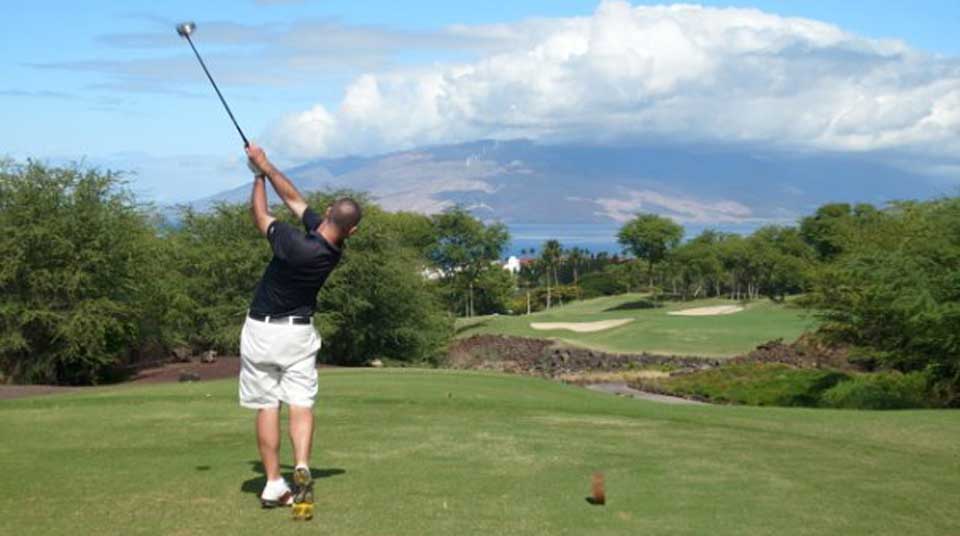 My husband, Paul, teeing off on one of Wailea's many scenic holes.
Jessica Marksbury

I had the chance to play Augusta National when I won the media lottery after this year’s Masters, and it was an enormous treat just to walk down the center of the fairways instead of outside the ropes. It was definitely the toughest course I’ve ever played. There aren’t any forward tees, so getting on the par-4s in regulation was a challenge. Sadly, I didn’t have any birdies, but I was very proud to make four pars — including on No. 11, which was the highlight of the whole day. 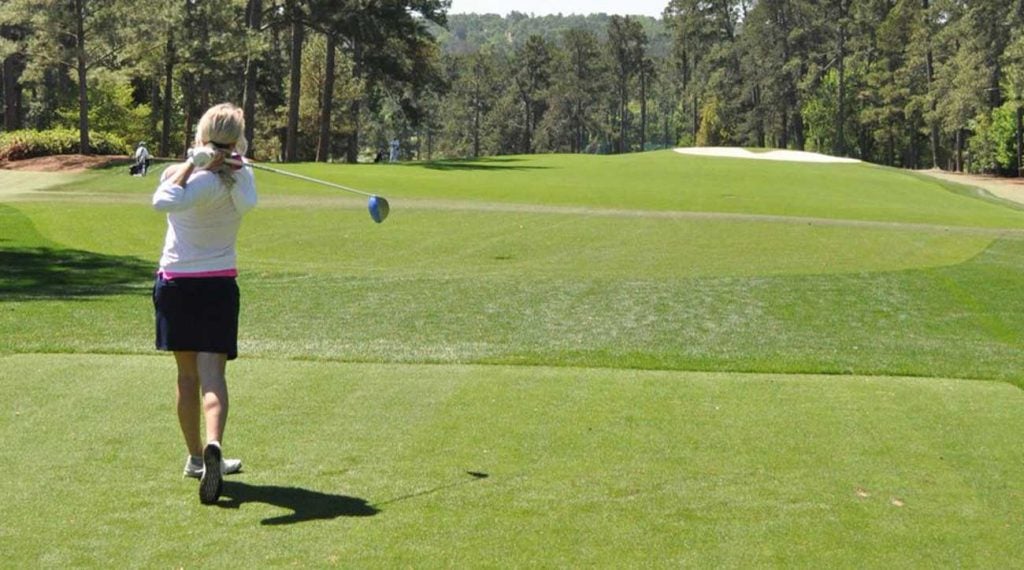 When I drew my dear colleague as my next opponent in our office match play tournament several years ago, he graciously suggested that I meet him on a Sunday afternoon at his home club, Pine Valley. It was one of the greatest thrills of my life to tee it up at the top-ranked course in the world, and we had a blast — even when an unexpected shower drenched us on the 17th hole.

I played Cypress with another fab colleague back in 2015. The weather was gray — high clouds, but no rain. I loved the laid-back vibe. The course was absolutely stunning, and I wish I could play it again — and again and again.

My husband is from Ireland, so until we moved to Arizona from New York, we used to take twice-yearly trips across the Atlantic to visit family. (Now we’re limited to one longer trip in the summer.) We’d always bring our clubs, and after playing a lot of courses in and around Dublin, we decided to take a road trip with some friends to play Ballybunion and Tralee. I liked Ballybunion, but I loved Tralee. It feels like a course that’s been around for 100 years. The views are stunning and the conditioning is superb. Truly, it might have the best back nine in all the world.

Ready for a story? When I was 16 years old, my dad took me on an epic father-daughter golf adventure. We drove to Monterey from our home in Southern California and played a bucket-list trifecta of courses: Spyglass, Spanish Bay and Pebble Beach. We stayed at the Lodge, looking out at the pristine playground that is Pebble Beach from our window. We strategized how we planned to play our first tee shots for an entire day before our round.

Now, I should disclose, my dad and I are not big on range warm-ups. We like to get out of the car, take a few practice swings, and start our round. But of course we arrived for our tee time at Pebble Beach with plenty of time to spare — or so we thought.

We ate a late breakfast, ambled around the gift shop, putting green and grounds, and finally got around to checking in for our tee time about 20 minutes beforehand.

“Marksbury?” The starter looked puzzled. “Your tee time was 10:20. We’ve already replaced you. Your group is on the tee!”

Aghast and ashen-faced, my dad and I slumped outside. Tee times are non-refundable at Pebble, and I don’t have to tell you how expensive they are — even way back in 2001.

We sat together, silent, on a wall outside the pro shop as our group teed off without us. What do you do when you miss your tee time at Pebble? Sulk.

Someone must have pitied our predicament, because an assistant soon approached us.

We eagerly agreed, and then realized we had a few more hours to kill. We opted to head into Monterey to eat (again) before heading back for our new tee time.

It was on our way back to the course that I started feeling sick — really queasy-sick. I thought the windy roads were to blame, but when we finally got back to Pebble, the feeling in my stomach hadn’t abated. But what could I do? It was Pebble time!

The starter (a charming Scot with a thick brogue) greeted us warmly on the tee, and introduced us to our playing partners.

“How far is it to that bunker on the dogleg?” My dad asked him, putting his long-planned tee-shot strategy into motion. It was then that my stomach took a turn — that unmistakable feeling that we all know (and dread) too well — upward-traveling vomit.

I ran off the tee to the cart path below, where I did my best to spill my guts in the bushes off to the side.

“Ah!” cried a course marshal driving by. “It’s the excitement, isn’t it?!”

I feebly shook my head, and cursed the cream-cheese-laden bagel I’d ingested only hours before. As I staggered back up to the tee, I met my dad making his way back to the cart.

“What happened to you?” he asked, seeing my face.

“I hit it about 40 feet,” my dad lamented, shaking his head in disbelief. After all that planning, he’d be hitting his second shot next to me, at the forward tee. I sighed, disappointed for him. Between his top and my vomit, we were off to a pretty inauspicious start.

But then, a miracle. As I stepped on the tee, my churning stomach calmed. I felt better than I had all day. I ripped my opening drive, and my dad salvaged his tee shot to make the most impressive bogey I’ve ever seen. We had an epic round together, capped by a near-ace by him on the 17th, and final score of 79 for my 16-year-old self. We played the 18th at twilight, but we got the round in.

As I reminisce about that day, I can’t help but think of the good fortune we had to miss our tee time. Seriously! Had we teed off when we were supposed to, I might have been sick the whole round. Sometimes, things just seem to work out as they’re meant to.

Newport Beach has always been my favorite place in the world. We started taking annual family vacations there when I was just a baby and continue to gather there for a week every year to this day.

Now that I have a family of my own, my golf is limited, but I’ll never forget the day my dad and I teed it up at Pelican Hill. We played an afternoon round, so we got to finish during the magic hour, but between the crystal-clear views of Catalina Island, the warm, soft breeze, and the perfectly manicured course, there are very few places I’d rather be than on either one of Pelican’s two courses.

Just the thought of Maidstone leaves me brimming with joyful nostalgia and happy memories. I worked at the club during two college summers as a junior golf intern, and they were the two most fabulous summers of my life. I lived in a room in the clubhouse and worked six days a week with Saturdays off. During my time there, I met the most wonderful people (including my husband) and spent my Saturdays on the beach and exploring the beautiful east end of Long Island.

I was always encouraged to play the course with members or after my shifts, and came to love it more than any other I’ve ever played. Not only is it beautiful, with gorgeous vistas of the Atlantic, it’s also challenging yet fair. The changing winds made it feel like it was a different course all the time, and the club itself — with its stately clubhouse, tennis courts with three different surfaces, beachfront dining — was the most opulent and yet homey and inviting place I’d ever seen. I love every inch of Maidstone and always will. And that’s why, if there’s one course I could beam myself to for a round at any given moment, Maidstone is, indisputably, my top choice. 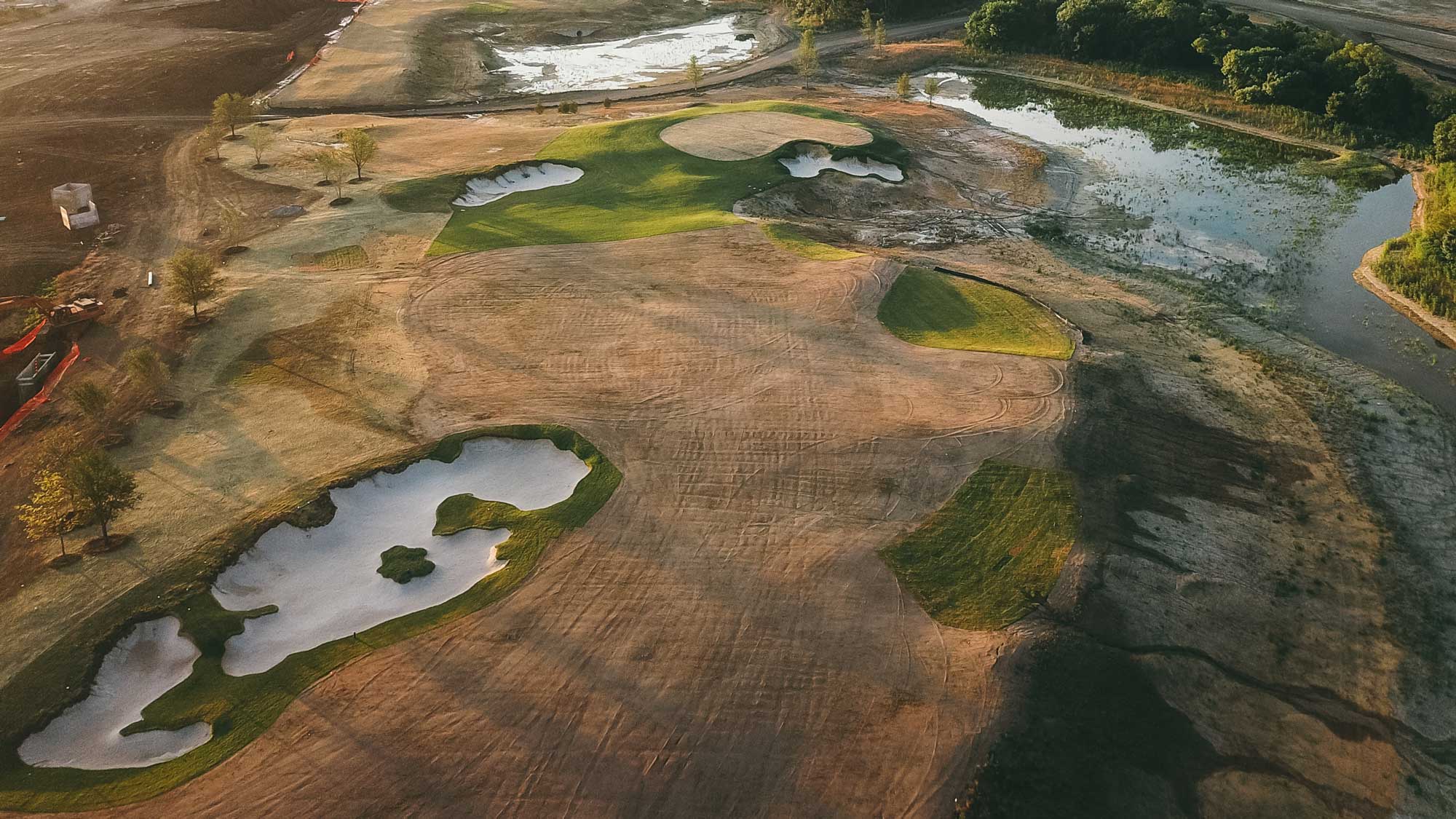 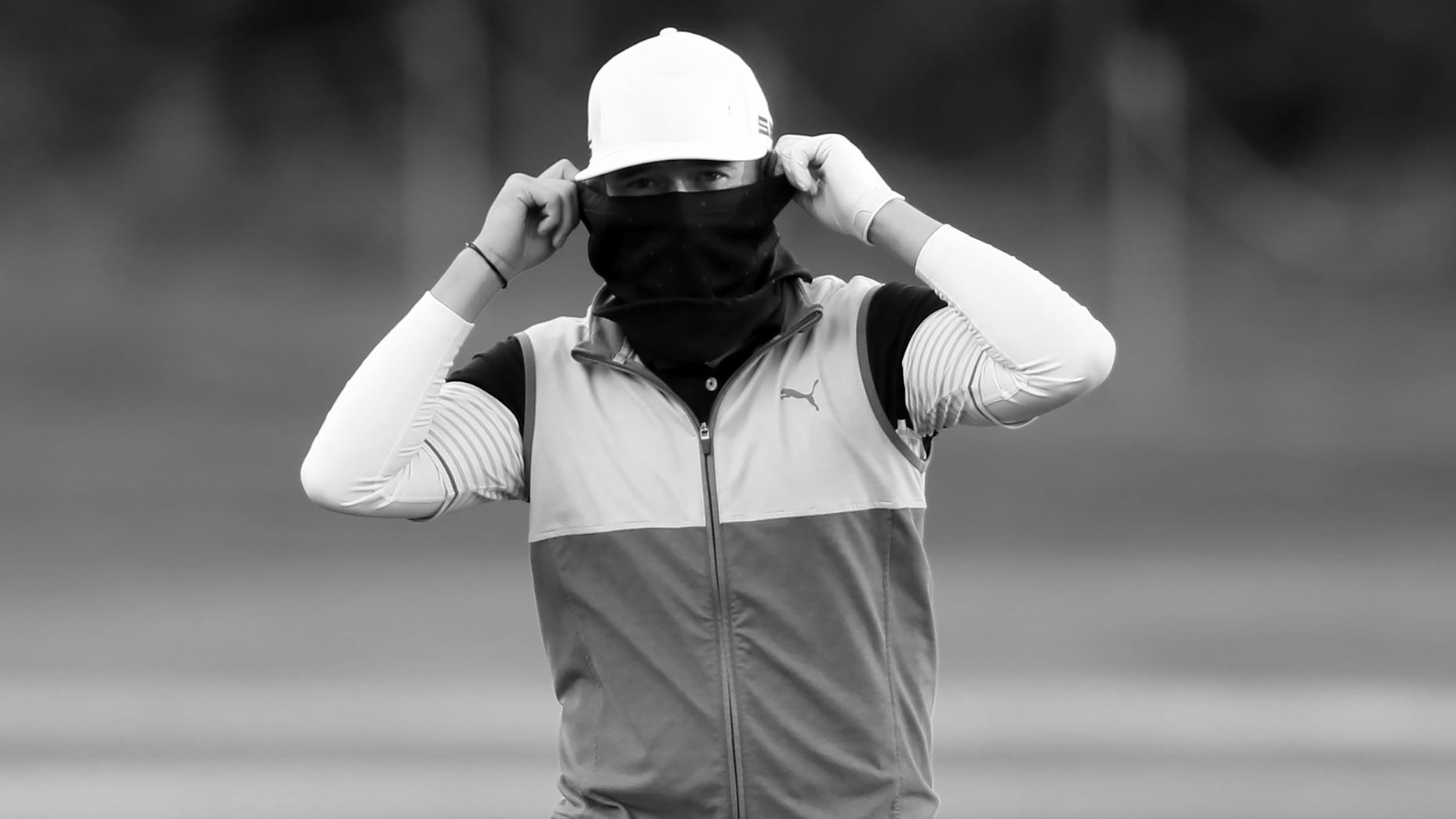 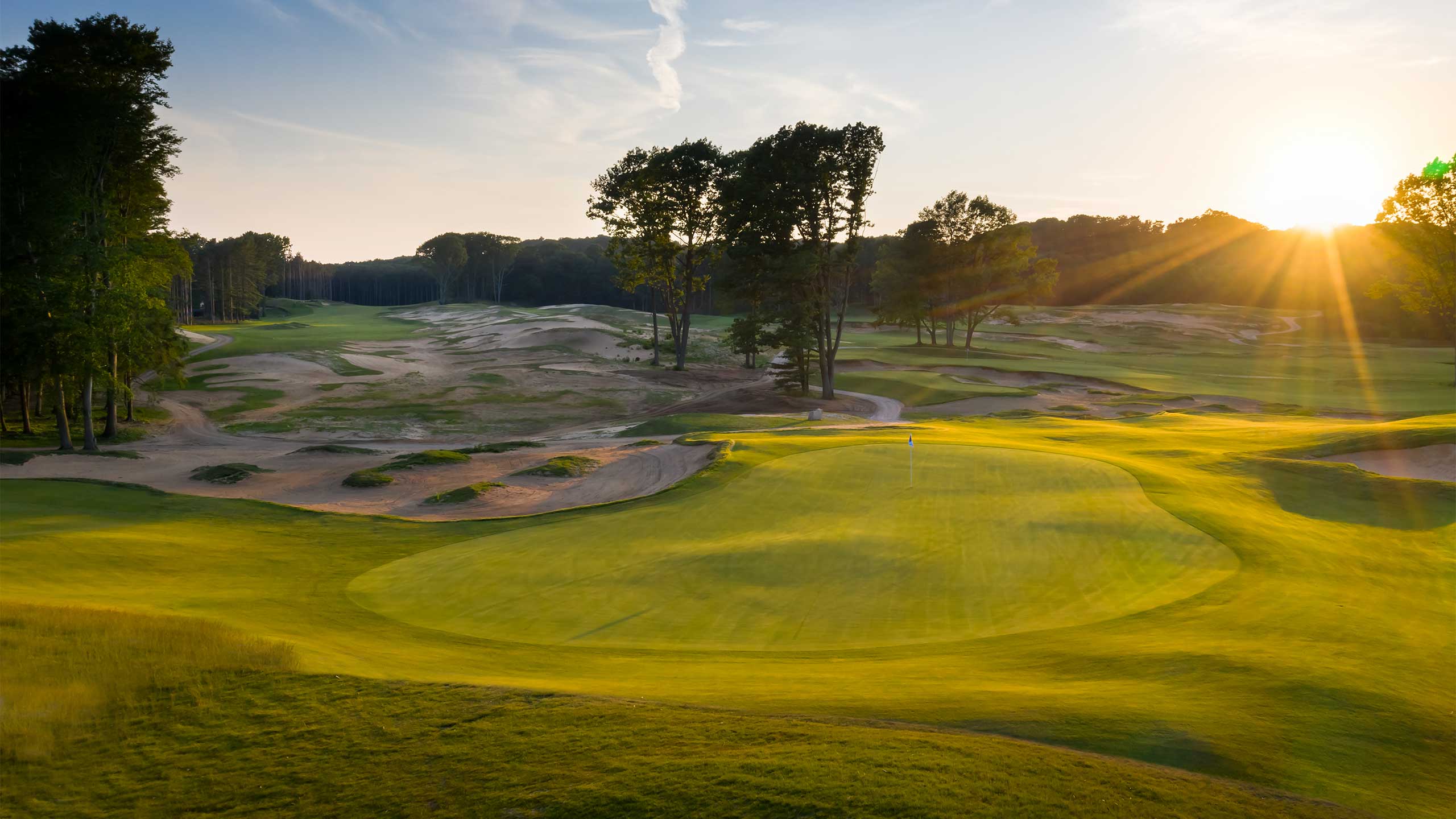 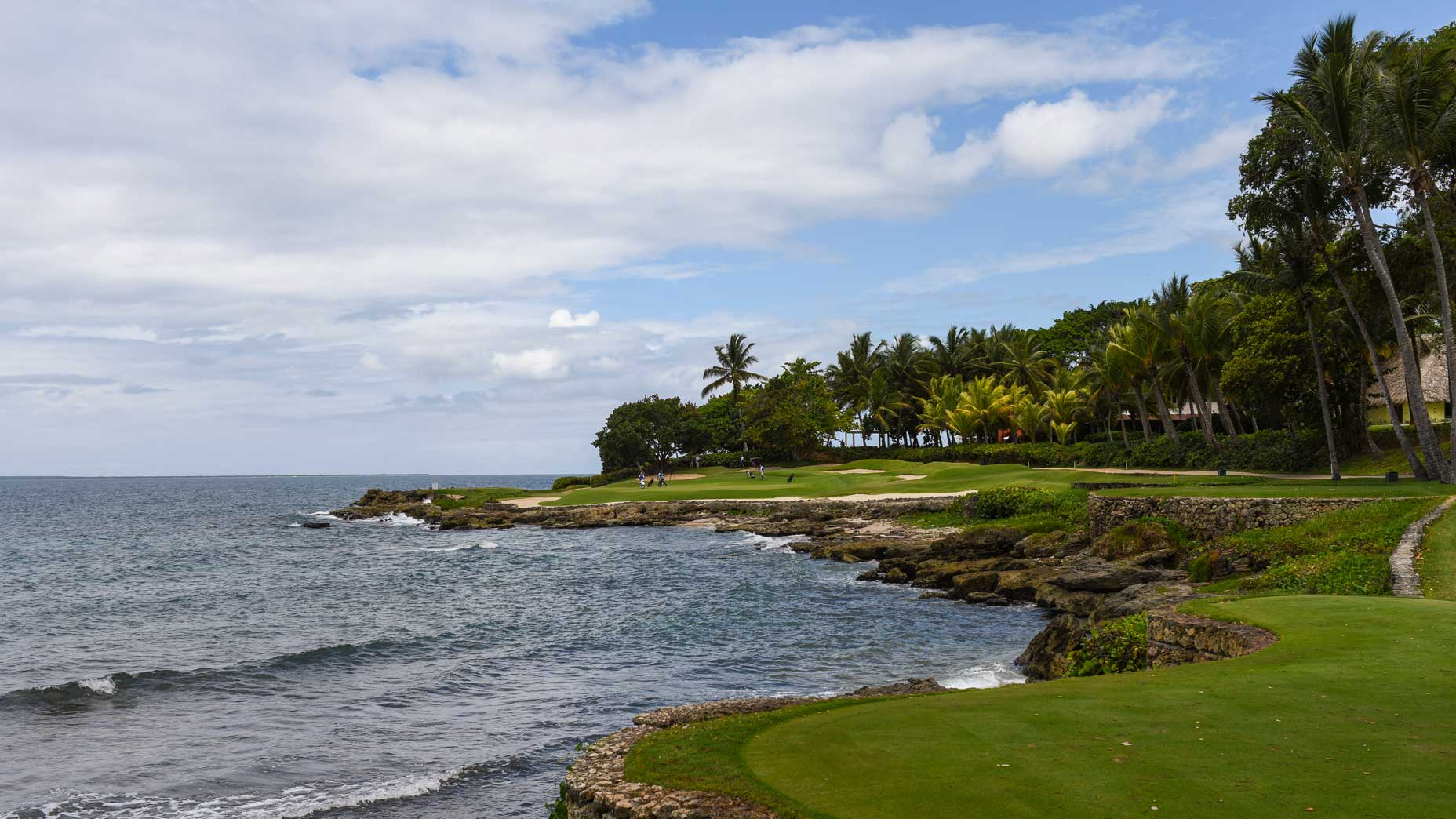 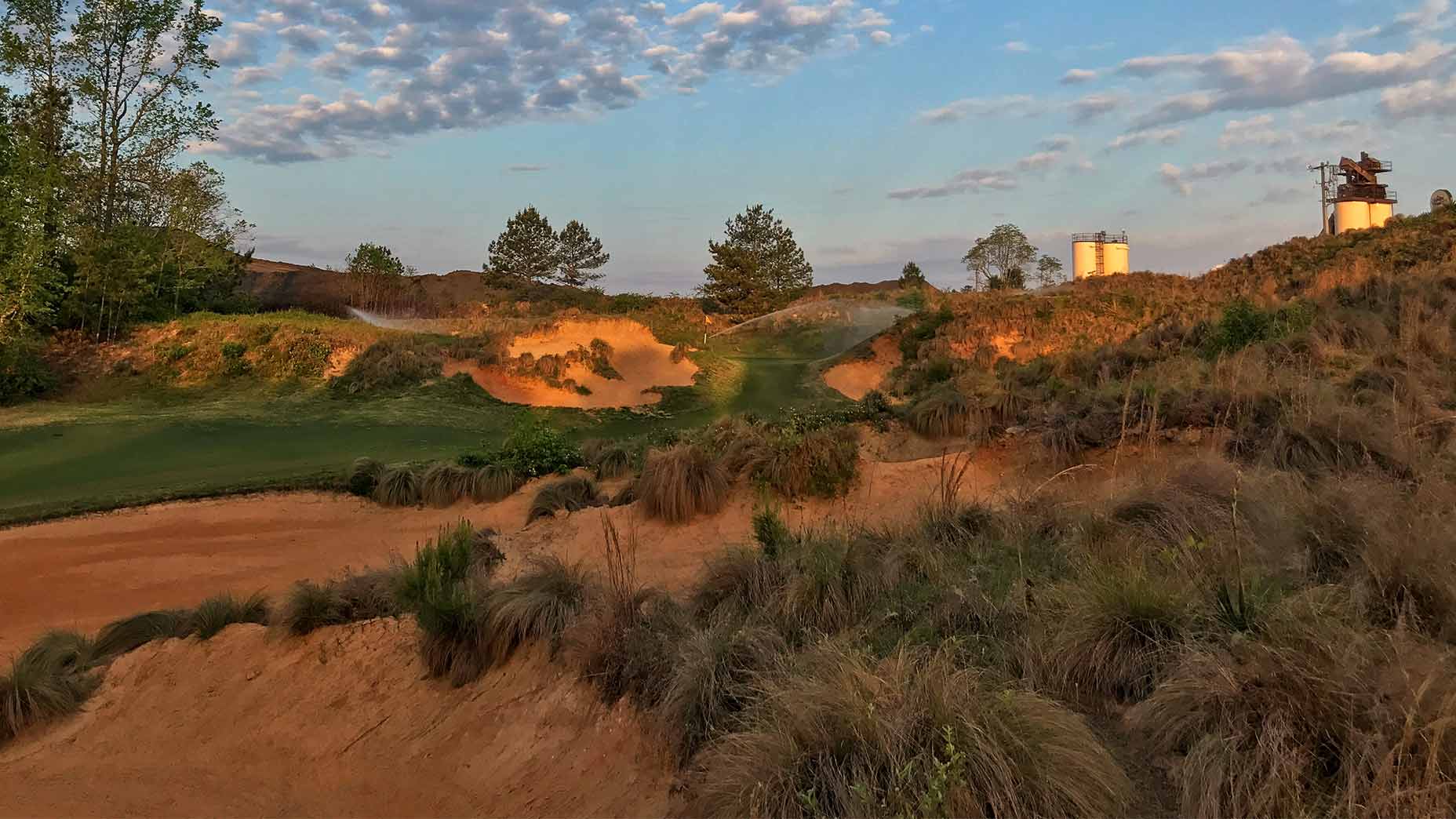