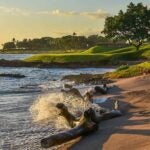 Pine Valley. Cypress Point. Bethpage Black. They are the most glorious golf courses in the world — but also capable of producing some inglorious moments. In honor of GOLF’s recent release of the Top 100 Courses in the World, we asked our staffers to swallow their pride and share their most humbling, embarrassing or chokiest moment on a Top 100 course. There is a story of a near-brawl. A score of 17 — yes, on one hole. And a newfound fear of shorts. We broke this series into three parts, with Part III below. Part I is here, Part II is here.

The day I became a model

While playing Casa de Campo’s Teeth of the Dog, I was awestruck by the beauty of its stretch along the ocean. To this day, the setting is entrenched in my mind. As sunset approached hours after I completed my round, I couldn’t help but wonder what the course’s signature hole, the par-3 7th, looked like during Golden Hour. I snuck out across the course with my playing partner, Patrick Koenig (who happens to be a photographer), to have a little photo shoot of our own.

While I am not a fan of today’s influencer culture and “do it for the ’Gram” mentality, I couldn’t help myself. I figured, what the hell? No one was going to see us anyway, right?! Wrong. While I thought everyone was off the course, it turned out there was still a group bouncing around in the twilight hours. They approached the tee box to find me barefoot, shoes in hand, glaring out to the sea for posed photos on the beach you must carry to reach the green.

“Are you done yet, Gisele?” said one member of the twosome. “We are running out of daylight.”

I was guilty of everything I supposedly stood against, and now had a group on the tee box yelling at me to get out of the way so they could squeeze another hole in. If you know me, you know how embarrassed I was to be caught having an “influencer in the wild” moment of my own. Never again. — Tim Reilly

This was not at a Top 100 course, but thinking of embarrassing moments got me thinking of a junior event I played in as a junior in high school. It was in Providence, R.I., in the early spring, so I wasn’t expecting any crazy-good players to show up. I could not have been more wrong. I was grouped with Megan Khang.

As I watched my friends head off to their shotgun start holes, I could feel myself getting nervous. Why couldn’t I have been paired with a high school teammate or neighborhood friend? I’m a recreational player whose high school golf coach signed her up for this event. To this day, I don’t think I’ve ever been more anxious on a golf course. I don’t remember my tee shot on the first hole, but I do remember double-hitting my putt on the first green. I don’t even know how I did it. Everyone in the group kind of looked at me in disbelief, but I was as shocked as they were. I made (at least) a triple bogey on the first. — Claire Rogers

You can Google this embarrassment

Nowadays, it doesn’t really count as an embarrassment if it doesn’t appear on social media. So in that sense, I’m lucky, as my greatest humiliations, including the stone-cold shank I hit with a 2-iron off the first tee at North Berwick a few decades ago, pre-date the Instagram age. But I haven’t escaped entirely unscathed. If you do a quick Google search, using the keywords “Whistling Straits” and “Cheesehead Challenge,” you’ll find footage that I wish I could hide from. It was taken earlier this year during a Wisconsin trip I made with two GOLF.com colleagues for a sneak-peek of the Ryder Cup host site. Because content is king, we decided we would try to spice up our reporting by concocting an on-camera competition: stroke play on each of the four par-3s; the player with the worst score had to don a cheesehead, one of those foam getups that Green Bay Packers fans wear to games and, based on what I know about such people, probably even in the privacy of their own homes.

As if being associated with anything Packers-related weren’t embarrassing enough, there is the simple humiliating fact that the footage exists in the ether, out there for anyone to watch. Sometimes, I imagine innocent golf enthusiasts and what they must think when they’re surfing the web for information about the game they love, only to land randomly on that link. Huh?  What? That guy works in the golf industry? And he’s been playing the game for more than half his life? In my defense, I was fresh off shoulder surgery, with limited mobility, in a fair amount of pain. But even that doesn’t explain how lame my action looks — a pass so old-man slow you’d swear that I was swinging in amber, and with more moving parts than a Rube Goldberg machine. I should be ashamed of myself. And I am. But I feel even worse for my two colleagues, who also work in the industry and have been playing golf for more than half their lives. As awful as I was, I beat them soundly in the Cheesehead Challenge, which has to be a terrible fate to live with. I’m not sure how they even get out of bed. — Josh Sens

With a shot at glory, I duck-hooked it

My goal when playing any Top 100 course is to break 80. I want to enjoy the course design and take in the experience, but of course I still want to play well. My first-and-only time playing Pebble Beach was on a cold and windy day, but I came to the iconic 18th hole with a chance.

I needed to make birdie, but with two good shots, it was possible. I ripped a drive down the right side of the fairway, certainly in the “go zone.” I briefly contemplated laying up, but it’s the 18th at Pebble Beach … and I needed birdie. Obviously I went for it, and duck-hooked it off the planet and into the rocks, sending the ball bouncing into the Pacific Ocean.

I did not break 80, but I did give the audience at the 19th hole something to boo me about. So there’s that. — Andrew Tursky

I’ve tried to erase this moment from my brain, but it’s impossible to forget. If you’ve never had the pleasure of playing Pine Valley, just know there’s a long, tree-lined road to the clubhouse once you enter the property. I was able to follow the member I was playing with through the grounds with no issues at the start of the day. The afternoon, however, was a different story. With a day full of memories and a belly full of snapper soup, I settled into my car to check my phone before heading home. What I didn’t realize was the member had already pulled away from the clubhouse, leaving me to find my way back to the entrance. Of course, I turned right when I should have turned left and spent the next 10-plus minutes zipping around winding roads in search of an exit. When I finally found one, it turned out to be a locked (to me) member exit. Thankfully, a member of the maintenance crew came along to save the day and point me in the right direction after what felt like an hour. I fully expected them to kick me out for loitering. Pitching a tent at Pine Valley doesn’t sound all that bad, but I’m not sure the membership would’ve approved. Next time, I know to take a left when I leave the clubhouse. — Jonathan Wall

A stone-cold top, right into the Swilcan Burn

The only time I’ve played the Old Course at St. Andrews came during a personal boycott of the driver. I took it out of the bag entirely for about 18 months when I just couldn’t hit it well. (Never the operator, always the equipment.) In its place, the longest club in my bag was a hybrid that I just smoked off every tee. It’s really the perfect club for a firm and fast (and not really long) Old Course. Only issue is that once a round, I would hit a top with it. I would rear back and sway my hips and get so amped to crush the ball that I would graze the top half of it and send it barrelling on the ground. That shot doesn’t play well on the 18th hole at St. Andrews. Yes, you guessed it. With the widest fairway in the world waiting for me, the sun gorgeously setting over the town, I topped my final tee shot straight into the Swilcan Burn, less than 100 yards from the tee. Most people stop and take a picture at the bridge. I had to stop and take a drop. — Sean Zak

There are many ways to reach a Top 100 Course. Of course, you can reach by car — this is perhaps the simplest method of transit, but there are others. The Fishers Island ferry comes to mind. For years, it was rumored that New York City mayor Michael Bloomberg landed his helicopter just off the 18th green at Deepdale Country Club on Long Island. And speaking of major metropolitan areas, the train is another likely option. Ubers, however, are a mixed bag. Sometimes you get the black sedan, sometimes you get … not that.

For my round at the Olympic Club, I made the mortal error of entering a bright blue, souped-up Toyota Prius sporting decals from various popular anime series’. When we got to the gate of the club, a security guard rushed out into the street to intercept (what he thought was) our clearly lost caravan. When I rolled down the window to tell him I did, in fact, have a tee time at the wildly famous Lake Course, he couldn’t stifle his laughter. A few minutes later, I grabbed my clubs and scattered from the Uber of my nightmares, but not before my face had turned the color of the famed “O-Club” logo.

Hey, at least the burger dogs were good. — James Colgan