5 haunted golf courses known for putting a scare into golfers (and not just on Halloween!) 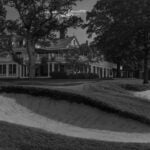 The spirit of 1913 U.S. Open winner Francis Ouimet is said to still roam the grounds of The Country Club, in Brookline, Mass.

Golf is often said to be a spiritual game. It’s also a game that messes deeply with our heads. So, it comes as no surprise that its history is filled with tales of unexplained sightings.

An apparition here. An ectoplasm there.

This is a pursuit that put the Boo in Weekley.

What better time to clear through the cobwebbed archives for our favorite stories of spectral on-course encounters?

Here are 5 that creep to mind.

Putts weren’t the first things buried at Lincoln Park. The 18th hole of the scenic muni is said to have been built over a portion of an abandoned cemetery. Stories are legion of balls going missing or dropping suddenly from the air, wildly short of their intended target. Some people have suggested that spirits are to blame. Yeah, that must be it.

Such nice folks, Canadians. Except when they’re not. Take the grim tale of Doris Gravlin, who, one dark night in 1936, donned a white gown and walked out on the course for a get-together with her estranged husband. Five days later, Doris turned up dead. A month after that, so did her hubby. Murder-suicide, that’s what many said. Many also claim they’ve seen her apparition, roaming the course in the same white outfit that she wore on that fateful outing. Poor taste, in our opinion, but still better than cargo pants.

Baltusrol is fresh off a killer renovation of its Lower Course. But nothing has changed about how the club got its name. It comes from Boltus Roll, a local farmer who endured a grisly death at the hands of two crooks, in 1831. The murder became notorious throughout the region. You know what else is well-known around these parts? The legend of “Old Balty,” Roll’s restless spirit, which is said to haunt the grounds. Like a lot of regulars, he’s looking forward to 2023, when the Upper Course will get redone, too.

If you think “You da man!” and “mashed potatoes!” are annoying, try dealing with a blood-curdling scream in the middle of your backswing. A lot of folks at City Park have sworn they’ve heard it. They believe the chilling cries are the echoes of a woman who was said to have been shot dead on the 18th hole in the 1960s. Note the phrase “said to have been.” It’s unclear whether such a killing ever occurred.

Have Ouimet Before? The Country Club, Brookline, Mass.

Francis Ouimet enjoyed his first 15 minutes in 1913, when, with the help of boy-wonder caddie, Eddie Lowry, he came out of nowhere to win the U.S. Open at this storied course, just outside Boston. But that was not the last of his time in the spotlight. So inspiring was his story that it became the subject of a best-selling book, which begat a Hollywood movie. And yet it seems that Ouimet still craves attention, though now he gets it as an apparition, spotted on the grounds of the exclusive club, which will host its fourth national championship next summer. One of several sightings came in 2005, when an assistant pro reported seeing the ghosts of Ouimet and Lowry, sitting on a bench beside the course. No word if they were posing for an Instagram post.