Pump up the volumes! Here are 12 golf architecture books you need to read 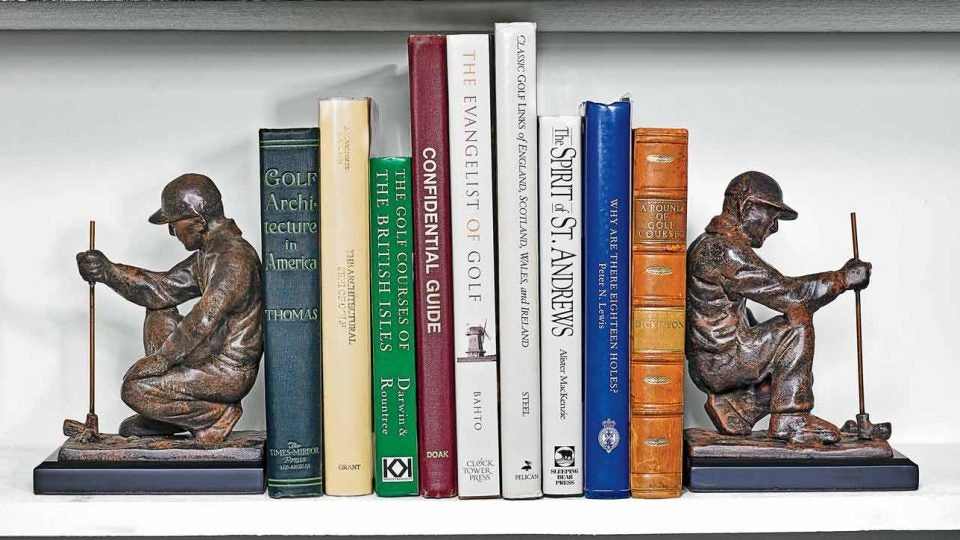 For golfers, these are the bookends to end all bookends. Even better, they're available for purchase on Amazon!
Jeffrey Westbrook

Although I have an on-again, off-again relation­ship with my clubs, especially my putter(s), one thing that never disappoints is a fine book. You’ll do your game — and your understanding of course architecture — a huge favor if you peruse any one of these 12 exemplary titles. So many pages, so little time.

1. St. Andrews — The Evolution of the Old Course, by Scott Macpherson (2007)
The Old Course at St. Andrews has done more to influence archi­tecture than any other course in the world. Therefore, an in-depth knowledge of the place, its evolution and hazards, serve as a springboard to expand one’s knowledge of design history. Since the Old Course is the world’s most feature-rich design, there is no short­age of material to cover. Macpher­son’ s meticulous attention to detail and history gives the book an edge over Tip Anderson and Desmond Muirhead’s 2001 breakdown of how to play the “Old Lady.”

2. The World Atlas of Golf, by Pat Ward-Thomas, Charles Price, Herbert Warren Wind and Peter Thomson (1976)
While many of the entries on this list were penned during the Golden Age, this book was published in the mid-197os, when not much good was happening in golf architecture. Its collection of superb essays is aug­mented with wonderful diagrams, and it is no exaggeration to say that the book reignited an interest in golf course architecture. For those who say that no list is complete with­out something by Herbert Warren Wind, they would be correct — and his writings are enjoyed here.

3. British Golf Links, by Horace Hutchinson (1897)
Hutchinson, the first golf editor of the century-old UK glossy Country Life, was also the game’s first triple threat — skilled player, architect and writer. His reach extended to both sides of the pond, and as early as the 1890s he praised design attributes like variety and lack of artificiality that later became prized. By doing so, he played a huge role in hasten­ing the arrival of the Golden Age of golf architecture — and then helped to define it.

4. Golf Architecture in America, by George Thomas (1927)
As the American architect Thomas notes in his foreword, “On account of our different climatic require­ments and topographical peculi­arities, we [in the U.S.] need our own technique added to the general rules of standard usage which we have assimilated from our friends across the sea.” Thomas wrote those words in 1926. Given that he had already designed Bel-Air CC, was in the process of building Riviera and would soon thereafter redesign LACC North, few words are worth listening to more. This was a mas­ter architect in full flight.

5. The Architectural Side of Golf, by Tom Simpson and H.N. Wethered (1929)
Defining what constitutes great architecture is no small matter; nei­ther is conveying it, but this book does both with aplomb. Simpson and Wethered’s prose helps with the definition, but it’s the book’s color plates that vividly highlight the dif­ference between the penal and stra­tegic school of design. Ultimately, the reader learns that great archi­tecture comes down to enabling a player to gain an advantage with a properly played shot.

6. The Golf Courses of the British Isles, by Bernard Darwin (1910)
Darwin’s ability to capture the spirit of a place is more compel­ling than anyone’s before or after. How is that? Simply put, magic is created when his love of words col­lides with his love of go! Too many modern writers play the architect name game. Darwin didn’t. Instead, his energies were focused on what really matters: the peculiarities of the courses themselves.

7. The Confidential Guide to Golf Courses, by Tom Doak (1996)
To be able to converse intelligently about course design, one needs to be able to articulate the good and the bad. Many books are adroit at highlighting the good, but Doak — a superb architect in his own right and the principle author of this series of course guides started in the ‘9os­ — provides a fresh take on golf writ­ing, giving voice to the limitations of certain design features. Addi­tionally, most books cover the same 100 courses. Doak’s efforts go far beyond, highlighting the good, the bad, the ugly and the unique. The Guide’s approach was groundbreak­ing and, for that reason (and despite my later involvement) it edges out Doak’s Anatomy of a Golf Course.

8. The Evangelist of Golf, by George Bahto (2002)
A renaissance in golf architecture books, as well as with the architec­ture itself, began in the mid-199os. Tomes on your favorite architects, from Ross to MacKenzie, were pre­sented but none was as informative and enlightening as Bahto’s efforts in illuminating just what C.B. Mac­donald meant to American golf.

Travel
I designed a par-4. Think you can do better? Send us your sketch!

9. Classic Golf Links of England, Scotland, Wales and Ireland, by Donald Steel (1993)
Given that links is golf’s highest expression, a book in the collection that provides a road map of where to play is vital. Steel’s writing is as flaw­less as his playing, and he makes the ideal host as he squires you around the coasts of the United Kingdom and Ireland. The large photographs convey each course’s allure and give it the edge over Sir Peter Allen’s beloved Famous Fairways (1968).

10. The Spirit of St.Andrews, by Alister MacKenzie (1995)
The neat thing about MacKen­zie’s book — which was written in the 1920s and ’30s but not pub­lished until 1995 — is its global per­spective, from his adoration of the Old Course to an appreciation for the stunning landforms he worked with in California. All the while, he makes fun of golf committees and the card-and-pencil mind-set, the same blights on the game today as eight decades ago.

11. Why Are There Eighteen Holes? by Peter N. Lewis (2016)
Lewis’ book makes you think like few others. Early on, he establishes that golf began as five-, six-, sev­en-hole affairs in the 17th and 18th centuries, then hammers home the point that the merit of a course in those times was based on the vari­ety of its hazards and the quality of its turf. How many holes was imma­terial to a course’s perceived worth. What a shame that has changed. Ultimately, the reader is left to pon­der if golf is indeed better with a “predetermined course” rather than an “organic” number of holes.

12. A Round of Golf Courses, by Patric Dickinson (1951)
Starting a golf library is no chore, as the sport has long attracted gifted writers — and Dickinson was one of the best. His dazzling prose whisks the reader through a tour of 18 courses across the UK, and leaves the reader realizing that the sport is enjoyed most if one doesn’t take it too seriously. His selected courses were, refreshingly, not meant to be “the best,” but rather ones that offered fun and unique challenges.

More golf course design and architecture content:
What are template holes?
What makes Seth Raynor designs so special?
These five golf hole designs are templates that will never go out of style
What is an Eden hole?