I designed a par-4. Think you can do better? Send us your sketch!

Editor’s note: If you haven’t yet entered the inaugural GOLF Magazine + Nicklaus Design Challenge, there’s still time! The deadline is March 15. Grab a sketch pad or your laptop and send us your vision for your dream par-4. If your design is one of our 10 finalists, you’ll get your name (and hole) in lights on GOLF.com. If your design is the outright winner, you’ll see an interpretation of your hole come to life on an actual Nicklaus Design course. (Read the official rules here.)

To help get your creative juices flowing, we asked our architecture editor, Ran Morrissett, to whip up his own dream two-shotter. We’re hopeful illuminating how he thinks about design might inspire some of your own ideas. Oh, and don’t worry, Ran’s not eligible for the contest! (He’s just a good sport.) Check out Ran’s pitch, then send us your own… 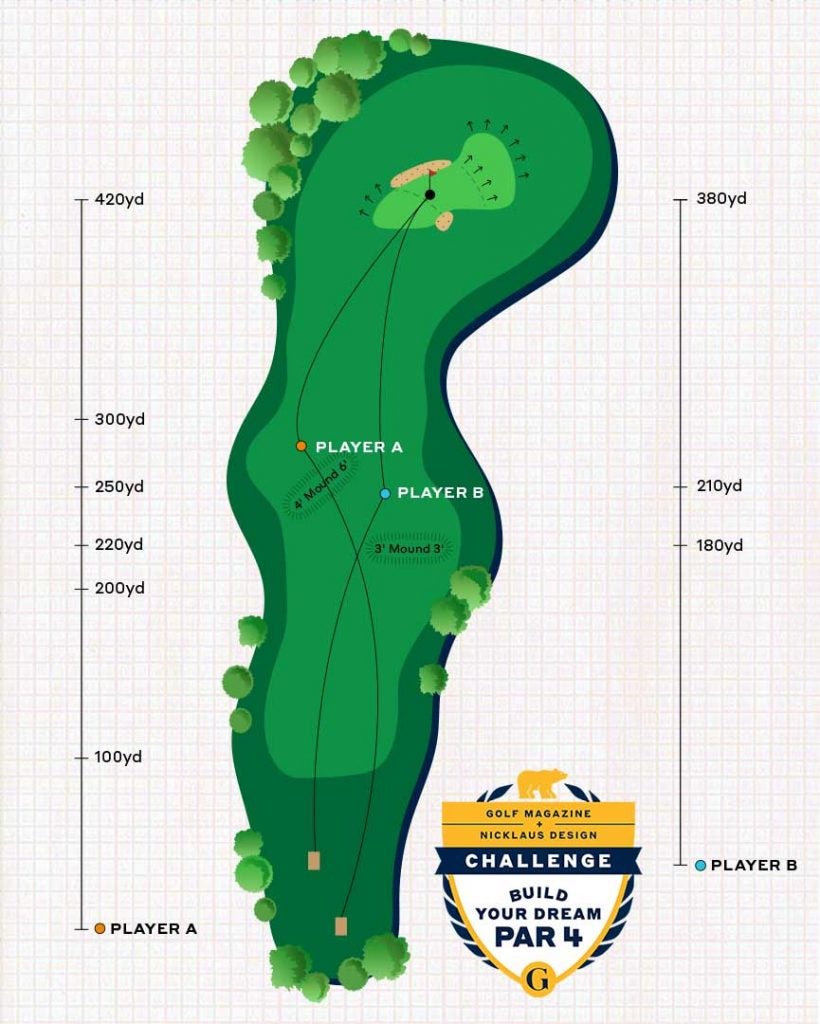 This medium-length two-shotter is playable for all abilities.
Illustration by Tanya DeSelm

My medium-length par-4 might look simple enough, but it addresses a number of my pet peeves in modern design, namely:

Travel
So, you want to design a golf hole? A beginner’s guide to the do’s and don’ts

That’s what my hole isn’t; now, here’s what it is:

My design has only two sets of tees (with an option for shorter-hitters or higher-handicappers to play the hole as a par-5 from the back tees) and fairway mounds in lieu of bunkers, with the direct path to the hole over the mounds. Weaker players can hit both a slice off the tee and a slice onto the green. Better player might elect to treat the hole as a “switch back,” hitting a draw off the tee and a fade into the green.

The green is elevated but accepts both running and aerial approaches. Two greenside bunkers complete the picture around the green with its higher front and lower back plateau.

Both bunkers would see foot traffic each day, which means they are well placed. The back bunker is trench style, much wider than it is deep, with the goal of occasionally serving up awkward lies/stances/swings. Though it is blind on the approach, the back bunker is more mischievous than the front circular bunker. Golfers often spend their energy trying to avoid the obvious hazard (i.e., the one they can see), but the hidden hazard here is likely to do more damage.

Bottom line: All skill levels can play and enjoy the hole without ever losing a ball. Plus, it plays wildly differently from one day to the next as the hole location can change the entire dynamic. Front hole locations are the most difficult, with both bunkers in play and the rise in the green at its high point there. Back-right pins are easier and encourage bold, attacking play, while holes cut in the middle swale will provide the most fun.

Have any bright design ideas of your own? We’d love to see them!

Nebraska’s newest gift from the golf gods, Landmand, is a course of biblical proportions