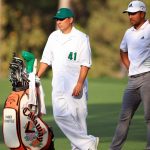 When Xander Schauffele triple bogeyed the 16th hole on Sunday, it ended his chances of claiming the green jacket.

Hideki Matsuyama’s Masters victory was rarely in doubt during the final round on Sunday at Augusta National, but for a fleeting moment between the 15th green and the 16th tee, the outcome looked like it might not be merely a formality.

After being in control throughout the entire day — and at one point opening his lead up to five shots — Matsuyama sailed his approach long and into the water on the 15th hole, leading to bogey. Playing alongside him, Xander Schauffele made birdie (and was inches from holing out for eagle) and cut the lead to two. Game on.

The shrunken deficit was short lived. Shchauffele’s next swing resulted in a ball in the pond on No. 16, and Matsuyama could breathe a sigh of relief.

Things got no better for Schauffele.

His wedge from the drop zone airmailed the green and he was unable to get up and down. When the ball finally found the bottom of the cup, Schauffele wrote down a triple-bogey 6 on the scorecard and Matsuyama’s victory was all but secure.

The triple hurt Schauffele for several reasons. First, it dashed his hopes of making an epic comeback on Augusta National’s back nine. There was surely some psychological damage, too. Although the 27-year-old is one of the top talents on the PGA Tour, he’s yet to win a major, despite seemingly always being in contention. The 2021 Masters was his eighth top-10 finish in 15 major starts.

At the time of the ill-timed triple, Schauffele was alone in second place. If he could have held that position, his payout for the week would have been $1,242,000. It’s no substitute for the green jacket, but any week that ends with a seven-figure check is a good one.

Instead, Schauffele dropped into a tie for third with Jordan Spieth, which paid out $667,000. The difference between making a triple and making a par on No. 16? A cool $575,000. Quite the costly hole.

The slip-up is yet another reminder of how crucial each stroke is in professional golf. One missed putt can be a half-million-dollar mistake.

Lee Westwood had a similarly valuable putt last month at the Players Championship. He holed a long birdie putt on the 72nd hole that earned him an additional $500,000. Such is life at the top of the game.

Always remember that even if the scoreboard says a player is out of a tournament, there is still plenty to play for.