This Baltimore man owns a green jacket, and Augusta National desperately wants it 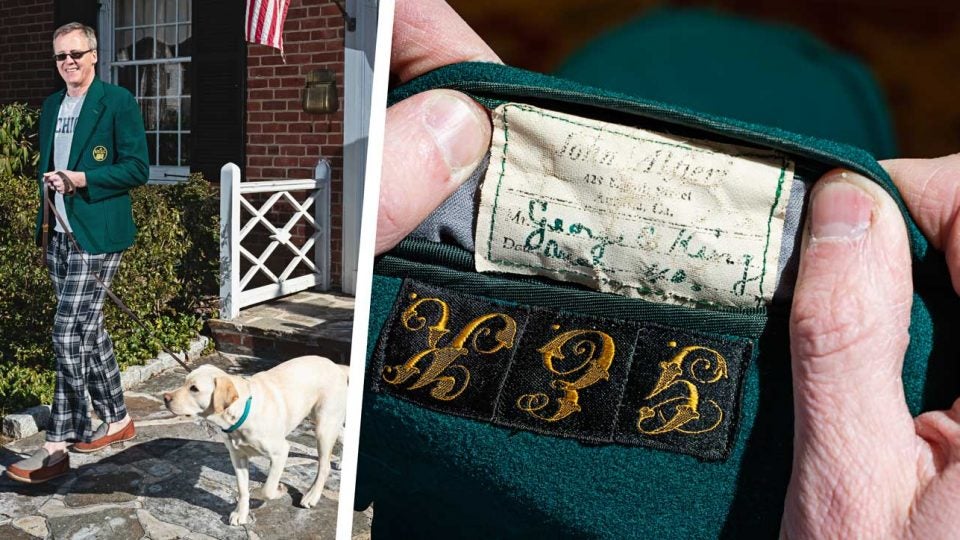 This article appears in the April issue of GOLF.

Hanging in Bill King’s bedroom closet, there are some reds. Two or three oranges. A pink, even. And a lot of blues. But at a glance, there are no greens. Only after unzipping a garment bag does the hunter green jacket you’ve been looking for finally dazzle your eye. And your hands. The wool is heavy. On an inside label, you’ll find the name of its long-ago tailor, John Alfieri.

But it’s the logo stitched into the breast pocket that gives it away as the rarest of rarities. The original Augusta National Golf Club insignia dates the jacket to the 1940s. Bill King’s coat isn’t just old, it might be the only jacket of its kind in existence, and right now — tucked away on the second floor of his modest brick house on Baltimore’s north side — it’s very, very far from its original home. And Augusta National wants it back.

Members of the world’s most elite golf establishment have been wearing club coats since the mid-1930s, shortly after Augusta National was founded. Over the years, these once-scratchy but now immaculately sewn beauties have become an odd and distinctive status symbol. The club went so far as to trademark the phrase Green Jacket in 2010.

So when King reached into his closet and put the jacket up for auction in August 2017, Augusta National took notice. At the time, two other green jackets were also up for online bidding, one of them a Byron Nelson champion’s jacket secreted away somewhere in England. The club, and the lawyers representing it, stepped in quickly and aggressively. “They’re an 800-pound gorilla,” one former legal opponent says. “They try to bully you.” And then some.

On August 11, Augusta National, Inc. filed a complaint against the entity handling the sale, Green Jacket Auctions, and won a temporary injunction to shut down bidding two days before the auction’s end date. When all this happened, King and his family were vacationing in New England, without cell or Wi-Fi service, and blissfully unaware of the fracas — for a while, at least. The complaint, which for legal reasons asserted that Augusta National had no knowledge whatsoever of the existence of these jackets, decreed that all three of them were either stolen or counterfeit.

When King finally got word of the injunction, he was stunned and distressed. “It’s not a great thing to see your name on the internet,” he says, referring to subsequent coverage of the filing. “It’s forever.”

But that’s how Augusta National does business with its many trademarks and its property claims. The problem with the King jacket, they soon came to realize, is that it is not a counterfeit. And it certainly would be difficult to argue that it was stolen.

Bill King’s great-grandfather, George Ellis King, of Janesville, Wis., was its original owner. The proof is there on the inside pocket, where his initials — G.E.K. — are elaborately embroidered. It’s hidden within the pocket, too. Scribbled on a tag is King’s name and jacket size: 40S. 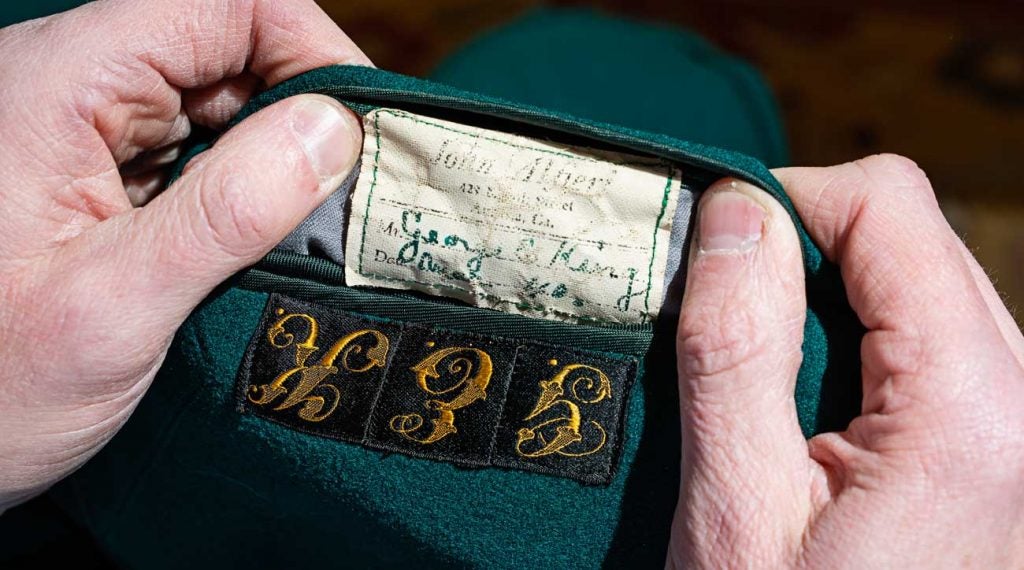 George King's name, size and tailor can be found on the inner pocket
Scott Suchman

Strangely, there’s almost less information about George King himself. His family knows that for one stretch of his life he played among the pines and azaleas as an ANGC member (the club has confirmed this), and that somewhere around World War II he stopped making trips from his home in Wisconsin to the warmer climes of Georgia. From there, the story becomes The Brotherhood of the Traveling Green Jacket or, as Bill King calls it, The 75-Year Closet Tour. George passed the coat down to his son Robert, who kept it for a time in Detroit. Robert then gave it to his son William Sr., who eventually placed it in his son Bill Jr.’s childhood closet in McLean, Va. After an ’80s stint in Ann Arbor, Bill Jr. and the jacket journeyed to Augusta — the city, not the club. He was visiting the parents of his girlfriend, whose mother “didn’t think anyone would be good enough for her daughter,” King recalls. Until she saw green. “I brought it out and showed her, and her opinion of me changed dramatically.” The power of the jacket.

Later, it spent a decade in San Francisco, before finally returning to its place of origin: the East Coast. This was in 2005. And there it hung on the same hanger in Bill King’s Baltimore closet for 12 years, a generally neglected garment with not much more than an unglamorously itinerant past. Enter the “Thrift Store Jacket,” as it’s called in memorabilia circles, an authentic green gem nabbed for five dollars in a Toronto Goodwill and resold, by Green Jacket Auctions, in April 2017, for $139,000.

He gave Ryan Carey, co-founder of Green Jacket Auctions, a look at his club coat. Carey believed it would sell for somewhere between $125,000 and $150,000. So King, whose profession he says is “entrepreneur,” did a quick analysis of the sustainability of golf (how many kids were picking up the sport, etc.) and became convinced that, like other markets, a green jacket bubble could theoretically exist and that the time to sell was now. With the August 2017 auction 85 percent complete, the injunction arrived — and Bill King found himself in the news.

King, 53, will be the first to tell you that he isn’t a golfer. His playing career begins and ends with the two lessons he took in the ’80s. To him, the jacket is family history more than golf history. And yet he watches the Masters each year. Not the U.S. Open or the British, but definitely the Masters. He’ll tell you exactly where he watched in 1986 (an Ann Arbor pizza shop), but as non-golfers often do, he refers to Jack Nicklaus as Jack Nicholson. Still, it’s because of his admiration for the Masters — the immaculate course, the perfect broadcast, the tradition — that King feels a bit beholden to the club he was, until recently, in conflict with.

There is only one green in Bill King's closet.
Scott Suchman

On January 9 of this year, Augusta National and Green Jacket Auctions filed a joint dismissal of the case, 17 months after the injunction. And in doing so they left King almost exactly where he began: with a family heirloom of sentimental but undetermined financial value. The auction house has withdrawn as King’s consignor, so here he sits in Baltimore, with three options: keep, sell, donate.

Bill and his wife have had lengthy discussions about each. “We could just go ahead and say, ‘Forget it. Let’s build a case for it.’ Set it up in the rec room and leave it at that,” King says. The couple has two children, ages 10 and 14, and the jacket’s six-figure haul could easily put them through college. Only lately has King been forced to think about the club coat’s purpose.

“Art, beauty and historical significance is in the eye of the beholder,” he says. “It probably would be better served to be somewhere where other people can see it and appreciate it.” And where would that be? Back at Augusta National? In a golf museum? King’s still trying to figure it out.

Though the club declines to comment on any of the three rogue jackets impacted by the injunction, it has reclaimed at least one of them — a coat they alleged was stolen from current member John Butler. The Nelson jacket, for now, remains in England. And for the time being, King’s will remain in his closet, because here’s the unkindest twist of all in this tale: The damn thing doesn’t even fit him.