PORTRUSH, Northern Ireland — Xander Schauffele finished up his third round at the Open Championship and joined a small media scrum. He gave a series of lighthearted comments about his round, a two-under 69, and his imperfect tournament preparation, which had included a vacation and an illness. And then, without breaking SoCal stride, he calmly shredded the R&A for leaking his failed driver test from earlier in the week.

“The R&A, they pissed me off because they attempted to ruin my image by not keeping this matter private,” he said. “This is me coming out and treating them the exact way they treated me.”

The test in question came Tuesday evening. For the second consecutive year, The Open’s governing body conducted testing of 30 random drivers to ensure clubheads stay within the legal limits. Tiger Woods was among those whose driver was tested, though Woods, for one, confirmed that his had been deemed legal.

On Friday, Schauffele first addressed the matter of his driver, a Callaway Epic Flash Sub Zero, in public. “I thought it was a little bit unfair,” he said. Saturday, he minced far fewer words. 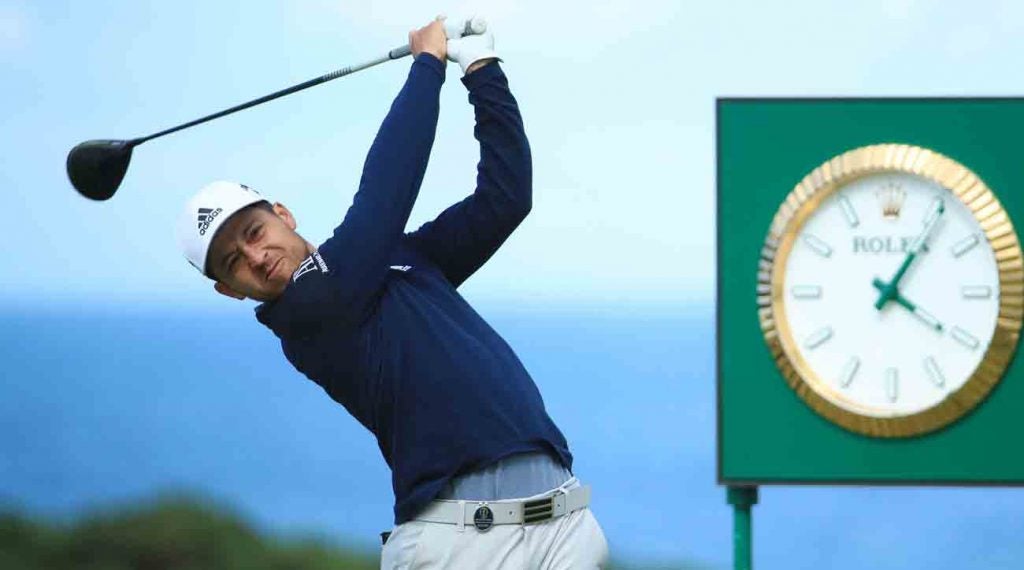 What initially drew Schauffele’s ire was his allegation that his test results had been leaked.

“We’re the traveling circus. There’s certain moving parts on Tour here — and everyone on the grounds knew for some odd reason. So that’s enough to throw me off my game. I can handle it, I’m a big boy,” he said. “But it was just handled unprofessionally. And it did tick me off, for sure.”

Schauffele implied that he favors the PGA Tour’s approach to equipment testing, and that he doesn’t think it’s within his responsibilities to personally monitor his driver’s levels.

“I don’t sit at home and test my driver, you know. To my best belief, I was playing a conforming driver. I think The R&A’s job…well, the PGA Tour takes it up with the manufacturer. Our job as players is to show up to tournaments, put on a show for The R&A and for the Tour and to handle our business. It’s not to make sure our stuff is conforming.”

Worst of all, Schauffele said, was the reaction he got from fellow players, one of whom loudly called him a cheater in a very public setting.

“It is an unsettling topic. I’ve been called a cheater by my fellow opponents. It’s all joking, but when someone yells ‘cheater’ in front of 200 people, to me it’s not going to go down very well.” Schauffele said that the player in question was joking, and that the two are on good terms. “He thought it was funny,” he said.

Still, what it represented rubbed Schauffele the wrong way. “That’s not something you joke about,” he said. He added that when he was chipping before his round on Saturday, another player chimed in. “Someone else was like… ‘Oh, are your wedges illegal now?'”

To cap off matters, Schauffele alleged that his was far from the only driver to have failed the test.

“Other drivers failed,” he alleged. “I’ll just say it, I’m pretty sure a PXG driver failed and a TaylorMade driver failed and the Callaway driver failed. This matter should be private. But R&A didn’t do their job in keeping it private. So I don’t feel like I should — I can tell you right now what happened, or what I know.”

When reached by GOLF.com, a PXG representative said that the R&A had tested only one PXG driver (Billy Horschel’s) and it passed inspection. Both TaylorMade and Callaway declined to comment.

A spokesman for The R&A sent GOLF.com the following statement: “We always listen to feedback from players and have done so in this situation. We will continue to treat this as a private and confidential matter.”