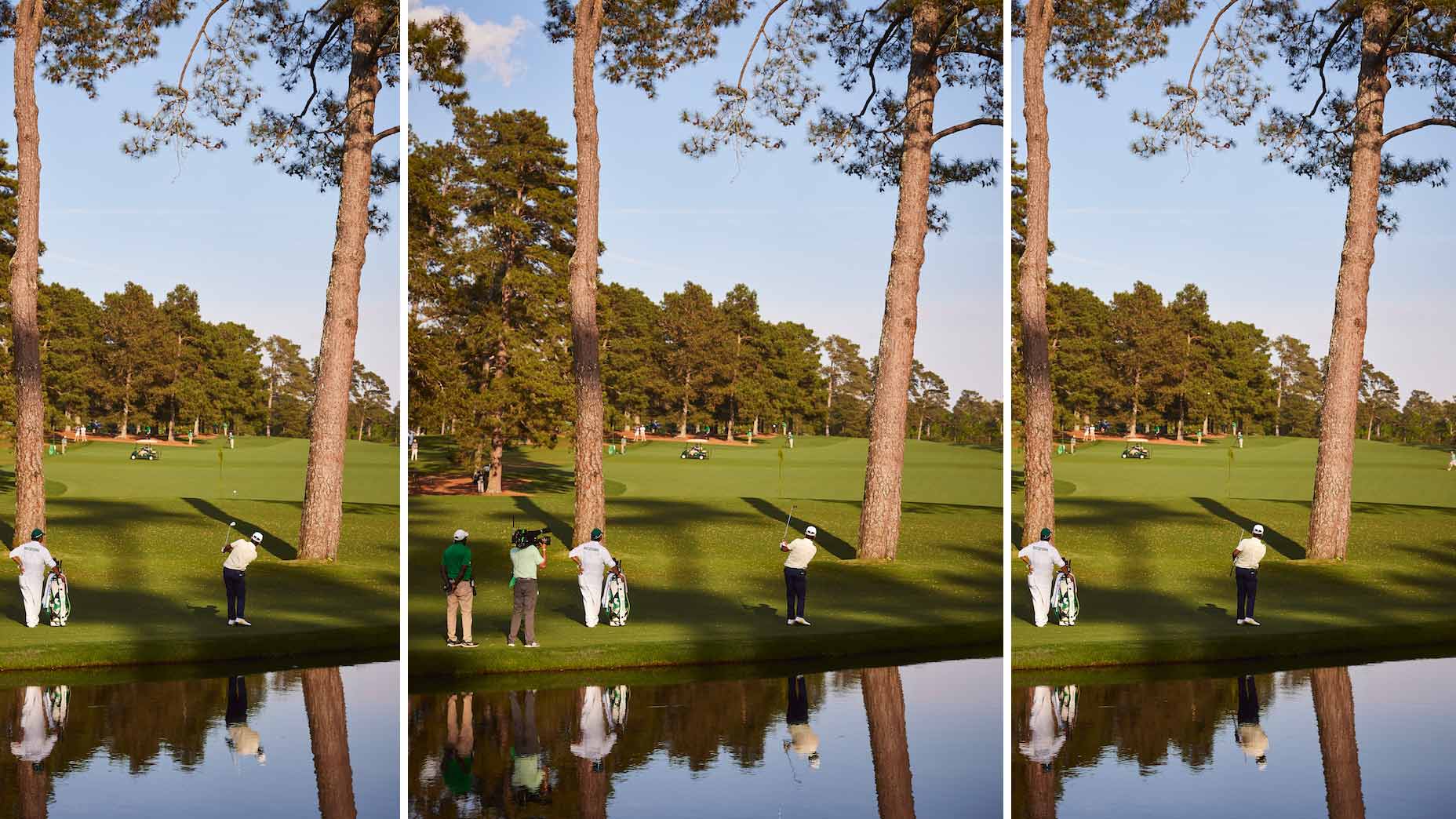 Hideki Matsuyama's tournament got suddenly complicated at No. 15 on Sunday.

AUGUSTA, Ga. — If you ever find yourself at Augusta National on Sunday afternoon of the Masters in search of a place to spectate, consider the sixth hole.

After the leaders play it on Sunday, No. 6 turns into a giant grassy amphitheater. It’s the best view on the course, particularly in the grandstand-free Masters of 2020 and 2021. The pivotal 16th is laid out before you, for one thing, with promises of a Sunday ace or at least several close calls. But even better is the view beyond the pond back toward the 15th green, framed by the trunks of several stately trees. (Check out the photo above.) Augusta’s beauty as a golf course comes in large part from its corridors, and this one is the best; you can see the tiny strip of green, then the pond guarding the front of 15, then the sloped fairway beyond.

The amphitheater was filled on Sunday. At least, filled by 2021 standards. Estimates for weekend patrons at this playing of the Masters ranged from three to 10 thousand, and some significant percentage of those spectators filled the hill on Sunday evening, leaving the sort of semi-respectful space between groups that you’d see on a hot day in Central Park.

Still, there weren’t so many that certain noteworthy individuals couldn’t be spotted from high atop the hill. There was Jay Danzi, Jordan Spieth’s agent, nodding in approval as Spieth finished off a tricky two-putt. There was Macklemore, strolling along the edge of the pond showing off his line of gaudy “Bogey Boys” apparel. Joe Jonas, also decked out in Bogey Boys gear, sat with four buddies at the base of the hill, smoking a cigar. There was Tiger Woods’ agent Mark Steinberg (Justin Rose’s agent, too!) trying not to wince as his man lipped out a par putt. There was Jordan Spieth’s brother. Will Zalatoris’ girlfriend. Russell Westbrook.

As the day’s penultimate pair putted out on No. 16, a murmur suddenly ran through the crowd. A ball had just landed on the back edge of the 15th green and now it was bounding forward, past the tree trunks, down the closely mown slope, one bounce then two then three then more, still picking up speed as it splashed in the pond. Joe Jonas pointed at the ripples.

And with that drowned Srixon, the Masters was suddenly up for grabs.

For the last two hours, the golf tournament’s outcome had felt like a formality. Matsuyama had bogeyed the first hole but then settled into cruise control with birdies at 2, 7 and 8 to open up a lead that soon stretched to a half-dozen shots. He bogeyed 12 but birdied 13 to get it right back. His competitors seemed to be playing a different, more difficult golf course.

But his playing partner Xander Schauffele was playing quite the pesky round. He could have been left for dead after a bogey-bogey-double stretch at 3-4-5, but instead he’d rallied with birdies at 7, 8, 12, 13 and 14 to stay within four shots of the lead. And now, suddenly, his opponent had given him an opening.

With Matsuyama in the back pond, Schauffele’s own approach to 15 settled in relative safety in the right greenside bunker. The amphitheater was buzzing now in a way that it hadn’t all week long. Mid-coronation, a golf tournament had suddenly broken out.

Matsuyama took a drop (with help from the crowd) and then played a smart, conservative pitch that settled on the fringe and kept the distant water out of play. Schauffele nearly holed his bunker shot. When the two tapped in their putts — Matsuyama for bogey, Schauffele for birdie — it was game on.

Schauffele was just glad his opponent had opened the door.

“I’m surprised he went for the green,” he said after his round. “I think, if he had to do it over again, for how good his wedges have been this week, I think he would have laid it back.”

But Matsuyama wanted to stay aggressive. Schauffele’s strong play had left a strong impression, and he had a good number to the flag.

“With Xander having the momentum, I felt I needed to birdie 15 because I knew Xander would definitely be birdieing or maybe even eagling,” Matsuyama said through a translator. “I had 227 to the pin. I hit a 4-iron. I flushed the 4-iron, and that’s why it went long.”

The moment was the Masters, summed up. There was drama. Tension. Questionable decision-making. A celebrity sighting. A solid swing and a confusing wind. A lack of precision, swiftly and completely penalized. A roar in the trees. A reminder that even if this tournament does begin before the back nine on Sunday, it certainly doesn’t conclude until every player has cleared every body of water.

The names on the two-line scoreboard beside the 16th green changed.

In four holes, Schauffele had cut the lead from seven shots to just two. “I was in full chase mode,” he said.

Suddenly a tee shot at No. 16 meant more than it had for any golfer since Tiger Woods in 2019, who nearly holed an 8-iron en route to a Masters-clinching birdie. Schauffele was envisioning something similar.

No. 16 was playing 184 yards. Schauffele and his caddie discussed the wind and decided to pull 8-iron, his 180-yard club.

Schauffele stared down his ball as it flew toward the flag. But from the hill at No. 6, it was clear the tee shot never had enough steam. Where the ball landed, it never stood a chance. Bounce. Splash. Groan.

Back on the tee, Schauffele looked like he was in physical pain. He swallowed one giant swallow. He shook his head. “I hit it perfect,” he said.

He echoed that sentiment after the round. “I hit a perfect 8-iron,” he said. “The wind was into, left to right. It got smoked and eaten up. You could kind of see it. The ball hovered there.”

Just as quickly as the moment arrived, it left. Matsuyama found the green. Schauffele took a drop and then finally found the downwind he’d been seeking, nuking 9-iron into the crowd long of the green. He winced in the direction of his caddie.

“Austin and I just kind of painfully laughed at each other,” he said afterwards. “Like, ‘Well, I guess it switched again.'”

Just like that, the tournament was over. Matsuyama used his entire cushion, three-putting 16 and lagging a short par putt to tap-in range at 18. He finished at 10 under par. Only one other player reached 10 under all day, and he stayed there for less than 10 minutes.

You see plenty of 72s on the weekend at Augusta National. You don’t see very many that feature two bogeys, a double bogey, a triple bogey and seven birdies. But that’s the scorecard Schauffele signed for, leaving him seven under par, T3 for the week.

Schauffele is no stranger to top-threes. He’s well aware that runner-up finishes pay the bills, but he’s consistently contended in golf’s biggest tournaments for several years now since his last victory. And the hunt for his first major continues.

“I finish in second a lot,” he said with a wry smile. “I didn’t even finish second this time. I’ve had worse second-place finishes.”

The swing at 16 will sting for a while. Schauffele knows that. The moment will hurt. When he gave Matsuyama a congratulatory hug on the 18th green, he meant it. When he sung his praises post-round, he meant that, too. But he’s ready to slip on a green jacket of his own.

Schauffele’s greatest gift as a talker is his willingness to state things simply, factually and without agenda. That was doubly true on Sunday.

“This is the best I feel like I’ve hit the ball in a long time. Just my ability to hit the shot I’m seeing, hit the windows and everything,” he said. “This sucks a lot, but I am very much looking forward to golfing here more in the future.”