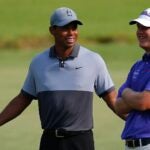 Tiger Woods and Tom Hoge at the 2015 Wyndham Championship

Welcome to another week of the Rogers Report, where I’ll catch you up on any eye-catching golf social media moments you may have missed over the last week. Leona Maguire became the first Irish LPGA Tour winner in history, Harold Varner III won the Saudi International in incredibly dramatic fashion, and Tom Hoge earned his first PGA Tour victory at Pebble Beach. Those were the big moments in golf. Let’s move on to the smaller ones.

Listen, I’m not here to tell you whether or not you should support the Saudi Golf League. If you need help choosing a stance, you can check out this helpful article by my coworker Dylan Dethier. I am, however, going to tell you where there’s good content. And there’s some really good content on the Saudi International’s Instagram page.

Abraham Ancer and Joaquin Niemann bought into a simple, fun idea that brought me a little joy; anytime you can get the pros to let loose a little and show some personality on camera, that’s a win. Any startup tour will seek to emulate the social videos the DP World Tour has done really, really well, and it appears the Saudi International knows that’s a priority.

The most impressive part of Jordan Spieth’s week

While a lot of parents may discourage their kids from playing football or hockey due to the potential of injury, most would consider golf a pretty safe sport. You’re not going to get tackled, there’s little risk for a head injury and the worst your child might have to deal with is a bruised ego. Jordan Spieth rewrote the script for families everywhere on Saturday when he proved that golf as we know it can actually be extremely dangerous. If you’re scared of heights, look away.

I don’t think whoever designed Pebble Beach intended for a player to ever get that close to the edge of that cliff, never mind a top-15 player in the world. He could’ve fallen 68 feet to his death while on live television. Cancel your subscriptions to those Jake Paul boxing matches, folks. We’ve got Spieth, and Spieth’s all we need.

Side note: many people will say this shot was the most impressive part of Spieth’s week at Pebble. I vehemently disagree. In the video above, you’ll hear the broadcasters mention that Spieth has been dealing with an intestinal infection. During his presser earlier in the week, Spieth explained that he’s been dealing with C. diff. The fact that he spent four full days battling severe intestinal issues out on the course?! That is, to me, the most impressive thing a player can do.

There are a handful of universal experiences that every young adult, no matter how accomplished he or she may be, will go through. Getting your driver’s license, having your first alcoholic beverage, moving out on your own are a few that come to mind. The law doesn’t care if you are a two-time major champion, World No. 2 or a Ryder Cup team member. Some things you just have to wait for.

So congratulations to Collin Morikawa, who turned 25 over the weekend. Some will say there’s no big milestones that come with turning 25. Those people clearly haven’t had to pay a “young renter fee,” or suffered the indignity of limited car selections! Luckily, Collin won’t have to worry about that any longer. Although I suspect he could afford the extra fees.

Tom Hoge joined the PGA Tour winner’s circle on Sunday at Pebble Beach, but out of everything he did, it was this comment that stuck out to me the most.

First of all, I really appreciate the radical transparency here. Hoge had an awkward, one-arm embrace with his wife after he came off the 18th green on Sunday. But he was open about it in his post-round interview, which I think we can all appreciate. And it’s something a lot of us can probably relate to, too. I haven’t claimed a ton of big wins these last couple years, so I probably don’t remember how to properly celebrate, either.

Speaking of Tom Hoge … Tiger was asked about him at the 2015 Wyndham Championship, and he reacted the way a lot of us might have up until Sunday afternoon.

It’s not very often we see Tiger simply have no answer at all to a question, so this was particularly enjoyable to watch.

And finally, Cheyenne Woods and her fiance, New York Yankees centerfielder Aaron Hicks, announced that they are expecting their first child together this spring. Congrats to the happy couple and congrats to their future super-athlete son on hitting the genetic jackpot.

Finally, I’ll leave you all with this.

This is oddly specific, but quite relatable. I’ve never had a bad golf dream, but I do have a recurring nightmare that all of my teeth fall out. JT’s golf nightmare seems equally scary. Stay vigilant, friends.