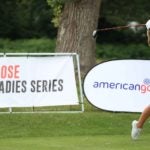 The Rose Ladies Series in England culminates in a three-day finale this week.

While the golf world’s eyes will be trained on the year’s first major championship at TPC Harding Park in San Francisco this week, across the Atlantic, Europe’s female pros will be playing the final event of the Rose Ladies Series — the grand finale of two month’s worth of tournaments in England organized by Justin Rose, his wife, Kate, and longtime Ladies European Tour player Liz Young.

Rose, a U.S. Open champion and Olympic gold medalist, put up 35,000 GBP of his own money to give the women an outlet for competition during the Ladies European Tour’s pandemic hiatus. Seven one-day tournaments in June and July were followed by the three-day finale, which began on Wednesday. The LET’s regular tournament schedule will resume with the Ladies Scottish Open on August 13.

Rose’s sponsorship news received enthusiastic and much-deserved reception on social media but for Rose, it just seemed like the right thing to do.

“Obviously the prize money and what have you is modest,” Rose said in a phone interview last week on behalf of his apparel sponsor, Bonobos.

“But the whole idea is just, you know, in terms of going back to work, professional sportsmen aren’t computers. It’s a skill set that needs continual attention.

“And I just wanted to help create a platform for the ladies to be able to go and stay sharp with their games, so when the big tournaments did eventually come around later in the summer or later in the year, they were going to be ready to play.”

Rose’s contribution was enhanced by other sponsors who signed on to support the series, and competitors included Hall of Famer Laura Davies and LET stars Georgia Hall and Charley Hull. With the final event of the series currently in progress, now the challenge is, how best to maintain the positive momentum?

“These things are self-perpetuating and self-sustaining,” Rose said. “You know, we even see it in the men’s game. The guys are continually being promoted by the PGA Tour or whoever it may be, the guys that continue to be on TV, and their faces are being used sponsorship-wise. So it’s just about helping get their stories out there, behind all the talent.

“And like I said in the beginning, these ladies have the same dreams I did, have the same dreams of being the best golfer they can be, winning major championships. And it’s just the opportunity that’s a little bit skewed at times. But the more their names get out there, the more the people begin to identify with their stories and their talent, then the more opportunity that possibly comes along.”

Rose’s generosity is a shining example of what can happen when a cause has a champion — especially one with the global profile Rose has created for himself. And here’s hoping that more high-profile voices will join Rose in giving the women’s game its due, and that the positive attention and exposure for women’s golf continues on an upward trajectory.

6 burning questions for the 2021 LPGA season (and, yes, we answered them!)