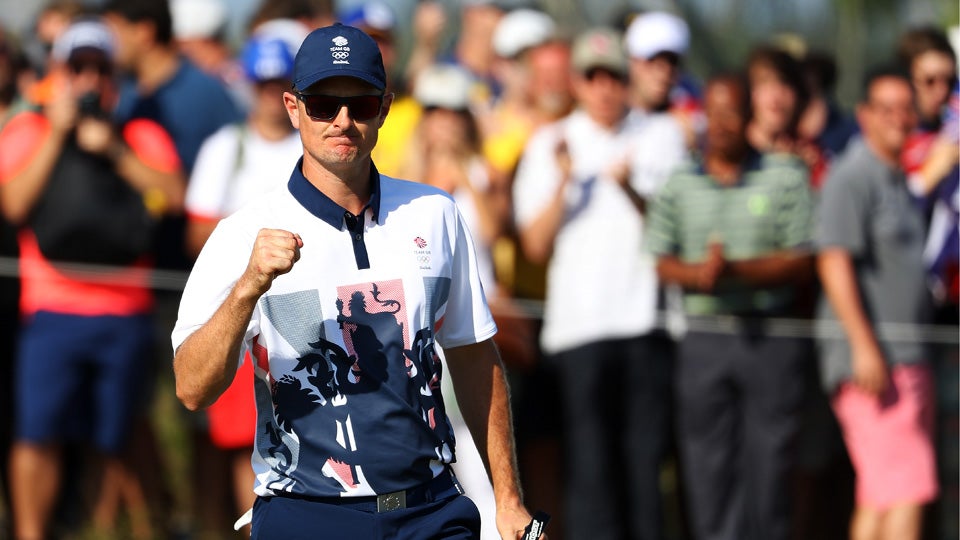 Justin Rose celebrates a birdie on the 15th hole of the final round of the men's Olympic Golf competition on Sunday. Rose out-dueled Henrik Stenson to win the gold.
Getty Images

RIO DE JANERIO—After 112 years and months of dispiriting headlines in the runup to Rio, the Olympic golf competition got the medal chase it deserved on Sunday. For 10 holes Justin Rose and Henrik Stenson engaged in a thrilling duel in the winter sun, exchanging birdies and gallant sportsmanship. On the back nine, with heavy metal at stake, things got a bit nervy, but coming down the 72nd hole the 2013 U.S. Open champ and the reigning champion golfer of the year were tied, at 15 under. All 15,000 tickets were sold for the final round, and giddy, sun-kissed fans surrounded the closing hole, a 571-yard par-5, giving the moment the big-time feel it needed. After two swings apiece Rose and Stenson were left with delicate pitches from short of the green. This is the strength of Rose’s game, but not so Stenson. Going first from 46 yards, the Swedish Iron Byron played a meek effort that left him 31 feet short. “It wasn’t my best approach shot, for sure,” Stenson said. “I kind of opened the door.”

CONFIDENTIAL: Did Golf Prove It Belongs in the Olympics?

Rose had challenged the cross-bunkers with his second shot, giving himself a better angle in, straight into the wind. From 39 yards he played an instantly iconic shot with his 56-degree wedge, his ball dancing to a stop two feet from glory. Stenson smashed his birdie attempt past the hole and missed the comebacker before Rose tidied up the gold medal, Great Britain’s 11th of these Games. The lusty celebration that followed said everything about how badly this usually reserved English gent wanted this.

“I’ve never, ever seen Justin react that way,” said Great Britain captain Jamie Spence. “That came from somewhere deep within him. The shot into the last green, I believe it will take its place alongside all the great moments of British sport.”

Said Rose of his reaction, “I’ve been so into it. I’ve been so up for it. I’ve been just so determined, I suppose, to represent Team GB as best as I could, and it was just the most magical week, it really was.”

With a spectacular 63 on Sunday, Matt Kuchar tied the Olympic course record and fought off a host of would-be challengers to secure the bronze medal. “It’s the happiest I’ve ever been to finish third,” said Kuchar, who was three shots back of Rose. “I’m just bursting with pride right now.” His U.S. mates Bubba Watson and Rickie Fowler showed up at the podium ceremony to cheer him on, indicative of the camaraderie that imbued this Olympic experiment.

At 36, Rose has won 20 worldwide tournaments, an Order of Merit title on the European tour and, of course, America’s national championship. He joins Charles Sands (1900) and George Lyon (1904) as the only golf gold medalists in history. Of his fancy new necklace, Rose said, “It sits alongside the U.S. Open trophy for me for sure.”

The gold didn’t come easily. Through 54 holes, Rose held a one-shot lead over Stenson, who on Sunday looked determined to reprise his final-round heroics from Royal Troon, as he birdied three of the first five holes. But Rose was unyielding, matching him with a trio of birdies of his own. “I just said today that I had to out‑Stenson Stenson,” Rose said afterward. “I knew I wasn’t going to get much [slack] from him.”

MORE: 5 Things We Learned Sunday  |  The Game of Golf, Itself, Won in Rio

Stenson overpowered the par-5 10th hole for a birdie to forge a tie and then took his first lead after Rose couldn’t get up and down from a greenside bunker on 13, his approach shot having been perhaps one foot from catching a ridge and trickling toward the hole. Stenson’s back locked up on him on the 13th hole and after receiving brief treatment from his physio he left his tee shot at the long par-3 14th short. He couldn’t save par, falling one behind. Both players were listing but found themselves propelled by the partisan fans, who were turned out in patriotic plumage and waved the flags of their homelands. “One hundred percent we were feeling the pressure, but then you have this slightly added dimension of the crowd,” Rose said. “You’ve got pockets of fans who are really pushing you forward. At a major championship, you have 50,000 people who are there to witness golf and they want to see who is going to win, but they are not really pulling for their guys specifically. So you kind of have a lot more good energy out there, so to speak. Sometimes when you make a mistake, or make a bogey, sometimes their energy can be positive and helpful.” Stenson caught Rose again on the par-4 16th after stuffing his approach shot, setting up the drama on the final hole. Kuchar played his heart out but could have made it even more interesting. A macho clout on the 303-yard par-4 16th left him with a 91-foot eagle putt, but it took him three to get down, and he settled for par at the last after an indifferent pitch. Afterward he was fierce in advocating for golf’s inclusion in future Games, as a referendum by the IOC is looming in 2017. “I’m not sure much needs to be said other than what transpired this week,” Kuchar said. “Look at the support that was out here, look at the guys that came through and won medals. This event has gone over I think fantastically well. I don’t know that it could have gone much better for the game. It’s a clear winner to move forward.”

Rose always felt the magnitude of the Olympic opportunity. As is his custom with the major championships, he arrived the Friday before to allow for extra preparation. “I made it a big deal in my schedule and made it a big deal all year,” he said. “I made it a highlight. I felt very inspired this week, for sure. I felt very motivated this week all week. Stayed very disciplined as well, focused and disciplined.”

His reward was getting to stand atop the podium while the Union Jack was raised against a bright blue Rio sky and a stirring rendition of “God Save the Queen” filled the air. Said Rose, “That was a really surreal moment, to be honest with you.” At one point he looked down at his new gold bauble, smiled and gave the slightest shake of his head, as in disbelief. It might have been hard for Rose to believe he was living it, but the moment was as real as hunk of metal around his neck.