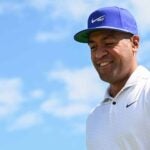 Tony Finau is back in the mix yet again at the 2021 WGC-Workday Championship.

At this week’s WGC-Workday Championship, Tony Finau is lurking near the top of the leaderboard once again. If it seems like Finau is always hanging around in contention these days, you’re not imagining things. He’s finished in the top 4 in his last three appearances, and in the top 10 six times since September.

Despite the fact that Finau’s play represents an enormously successful run, he unfortunately can’t escape questions about his ability to close, especially after his recent playoff loss to Max Homa at the Genesis Invitational. Finau is currently the 13th-ranked player in the world, but has only one PGA Tour victory, the 2016 Puerto Rico Open, on his resume.

But Finau’s positivity remains undiminished, as he reiterated yet again after his second round at The Concession yesterday, where he’s currently two shots behind Brooks Koepka’s lead at the tournament’s halfway point.

“I think experience has been my biggest life teacher and I’ve been able to just use some of those experiences of just falling short to just keep me hungry and keep working,” Finau said. “I definitely feel like I’m a tough player mentally, as tough as they come, and I feel like I have to be. When you’ve come close to winning as many times as I have, I think you could go one of two ways.

“I always look at my life and my game as a glass half full,” Finau continued. “I’ve always looked at my life that way and it’s helped me, but it definitely has made me tough.”

The spotlight shines bright on Finau, as well as the weight of expectation. But one thing he’s learning to do is to focus only on what he can control.

“I’ve learned again so much just being in the spotlight and so many people wanting me to win, expecting me to win, whatever the case,” he said. “I think one of the biggest things I learned is just to silence all the noise from outside. I’ve got my team around me that believes in me. I’ve got to believe in myself and anything that appears outside of that, I can’t control.”

Finau attributes his positivity to his parents, and especially his mom. But he also has a refreshing perspective on just how much of a privilege it is to tee it up on the PGA Tour week after week.

“I went through seven years of playing mini-tour golf and that’s probably when I had to dig the deepest,” Finau said. “Taking second out on the PGA Tour is tough because I know I have what it takes to win and I want to be
the best, but when you compare that to what life is really like outside of the PGA Tour, I knew what that tasted like to not even have a place to play and not make any money and stuff.

“I think it’s quite a big deal people are making of me not winning,” he concluded. “Again, for me it’s just silencing the noise and just trying to play good golf every time I play.”