‘I’ll never forget this’: Why this pro’s lone PGA Tour start was so meaningful 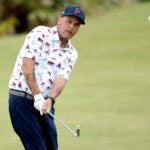 It was an emotional finish to Brian Morris' PGA Tour debut.

In his PGA Tour debut at the Butterfield Bermuda Championship, Brian Morris wasn’t even close to being in the mix. In fact, he finished last — 25 shots behind his closest competitor, and 39 shots shy of the cutline.

But scores and finishing position are probably the last things on Morris’ mind this week. Because in December 2019, Morris was diagnosed with Stage IV terminal brain cancer.

The 54-year-old head pro at Bermuda’s Ocean View Golf Course is scheduled to receive his 32nd chemo treatment on Monday. He was given a sponsor’s exemption into the tournament, and played the first two rounds alongside his cousin and fellow Bermuda pro Michael Sims.

On Wednesday, Morris explained how much playing golf has meant to him throughout his treatment.

Morris posted rounds of 89-92. When he tapped in on his final hole on Friday, he raised his arms in victory as the emotion of the moment overcame him.

There were hugs all around, as Morris tapped his chest and blew kisses to the gallery in gratitude.

“It’s been absolutely amazing,” he said after his round. “I’ll never forget this forever.”

Morris’ opportunity to live his dream of competing on the PGA Tour offered a much-needed respite from the treatment grind he’s endured for nearly two years.

“I hope I inspire people. When things happen this way, all the bad stuff, you know, you just see how much people love you. To be able to do this is amazing.”