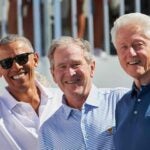 On this week’s bonus episode of Off Course with Claude Harmon, Dickens and Harmon discussed a range of topics, including how President George W. Bush was the reason Dickens first picked up a club as a young person.

“The military aide that worked with the President on the weekends, he called me one time on a Sunday,” Dickens began. “I was probably 23, 24 years old. And he said, ‘Hey, the President wants to—’ and before he finished the sentence, President Bush grabbed the phone and said, ‘Hey, can you play golf at 2:00?’ I said, ‘Sure.’ He goes, ‘Are you any good?’ I went ‘Uhhhh’ and as I hesitated he said, ‘I meant, are you fast?’ I went, ‘Yes, I can play fast.’

“And so I went that day,” he continued. “And teed off on the first tee box with dozens of cameras and hundreds of people and was trying not to vomit. I really did start playing with him, and he would go to some wonderful places. I kind of caught the bug.”

Now, with golf at the center of his professional and personal life, Dickens has first-hand experience of its appeal — especially for the Leader of the Free World.

“It is an escape, but remember, [Presidents] live in a fishbowl,” Dickens said. “They live on the third floor [of the White House], and the bottom floor has public tours. So long before social distancing, that was social distancing. You go to Andrews Air Force base or some course out in a rural area, it’s just your boys, cigars. They don’t get to be in open space very often. So I do think it’s an escape.”

For more from Dickens, including how partnering with Bryson DeChambeau led to the creation of the LA Golf putter, check out the full interview below.