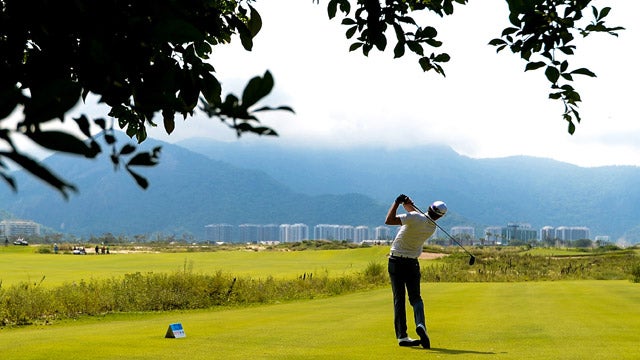 Rafael Becker of Brazil hits the ball during the Golf Tournament - Aquece Rio Test Event for the Rio 2016 Olympics at the Olympic Golf Course on March 8, 2016 in Rio de Janeiro, Brazil.
Getty Images

Golf’s return to the Olympics after a 112-year exile was supposed to be a global celebration on the grandest stage in sports. That may happen, but three months out from the Rio Games, golf is facing a potential crisis that threatens the credibility of its players as well as the sport’s place in the Olympics. In recent weeks Louis Oosthuizen, Charl Schwartzel, Adam Scott and Vijay Singh have announced that they will not play in Rio. The loss of these major championship winners is survivable—they are big talents but not exactly big names.

The disconcerting fact is that their opting out makes it easier for others to follow suit. “We’re watching this closely,” says a prominent PGA Tour agent who spoke on the condition on anonymity. “Some of our guys have been on the fence about going. If more good names pull out, it provides political cover for our players who don’t want to go.”

The larger meaning of the Games has now changed. It’s no longer about whether golf belongs in the Olympics. No, Rio has become an MRI of the souls of the top players: Are they passionate about supporting their sport? Do they see the big picture? Are they willing to make a small sacrifice for their country? No wonder golf’s preeminent elder statesman, Jack Nicklaus, labeled Scott’s decision “sad for the Olympics and sad for the game of golf.”

Consider that at the 2008 Games, South Africa won exactly one medal. In ’12 the country nudged its total to six. At this moment Branden Grace (11th in the World Ranking) and Oosthuizen (13th) would have been the South African golf representatives. If Schwartzel (20th) had cracked the top 15 by the July 11 cutoff, he also could have gone. In that scenario, it’s not inconceivable that South Africa could have won gold, silver and bronze. No wonder Gary Player said he was “sad and disappointed” by his countrymen’s decision. Jaco Van Zyl, a nation turns its lonely eyes to you. Some top players get it. In the recent 100-days-till-Rio fanfare, Sergio García and Martin Kaymer were among the golfers who took to social media to express their enthusiasm. Jason Day has repeatedly expressed his lust for gold, and Jordan Spieth, always one of the game’s most thoughtful voices, has likened the Games to a fifth major. Almost universally LPGA players are thrilled by the prospect of the Games.

“It’s going to be one of the biggest things to happen to women’s golf,” says Christina Kim. “I think at some point every kid dreams of competing in the Olympics, but I’m not sure any of us ever thought we’d have the chance to do so through golf. And to represent your country as part of that experience would be the ultimate honor.”

A popular canard trotted out by detractors is that the Games are supposed to represent the pinnacle of the sport and that will never be the case, given the long history of the major championships. But the Olympics is not the pinnacle for soccer, tennis or basketball, and these sports have all been enriched and elevated by being a part of the Games. As another individual sport, tennis offers the most useful comparison. Andy Murray’s gold medal at the 2012 London Games was as big a deal as any Wimbledon final. Roger Federer’s carrying the Swiss flag in the opening ceremonies in ’04 and ’08 was a more indelible moment than anything he’s done at the Australian Open. It will be a career-altering moment for whoever wins gold in Rio, no matter what else he or she accomplishes going forward.

Lately it has become trendy to kvetch about golf’s Olympic format, which is funny given that the 72-hole stroke play competition was announced in 2009. Ty Votaw is the PGA Tour official who spearheaded golf’s reentry into the Games, and he is happy to reiterate the reasons why the Olympics will look the way they do: “Golf is blessed to have many formats, but stroke play is always the standard of excellence at the biggest events. With match play many nations would have been eliminated early in the competition, which we didn’t want. And a team format reduces the competitiveness of many countries.”

The stickiest factor in the Rio debate is the Zika virus, which Singh explicitly cited as a reason for not playing. Much remains unknown about Zika and its effect on pregnancy, but it’s worth noting that August is wintertime in Brazil and the drier, windier, cooler conditions will most likely reduce the presence of disease-carrying mosquitoes. In golf circles there has been a lot of whispering that Zika fears weighed heavily on Scott. He was married in 2014, became a father last year and has talked about looking forward to adding to his family. Asked about this, Scott’s agent, Justin Cohen, replied in an email, “Zika was a consideration, albeit a minor one, but not a factor.”

Says one exasperated International Golf Foundation official, “There are mosquitoes carrying Zika in Florida and Texas, but I don’t hear any talk of boycotting the Players or Colonial.” All the controversy about golf in the Olympics would be useful in an any-publicity-is-good-publicity way were it not for the sport’s precarious place in the Games. Next year the IOC will vote on the slate for the ’24 Games. It won’t help golf’s chances if the players are viewed as whiny and entitled and unappreciative of the larger meaning of the Olympic spirit.

At least every other stakeholder in the sport seems to see the big picture. TaylorMade-Adidas made a significant investment to become the official apparel provider for USA Golf. “We think golf returning to the Olympics is a really big deal,” says company CEO David Abeles. “It’s a great way to stimulate growth and interest in the sport on a global basis, especially in countries that haven’t had a vehicle to convey the importance of golf to the casual sports fan. As far as introducing the personalities and life stories of the players, there is no showcase in sports like the Olympics.”