Why Anthony Kim is a Masters contender’s role model 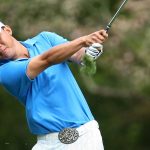 Anthony Kim during the second round of the 2009 Masters, where he made a record 11 birdies.

There were the usual suspects this week at the Masters. Tiger Woods, no doubt. Will Zalatoris could describe in detail on Friday, some 16 years after the fact, where he was — an Italian restaurant in the Bay Area — when Woods chipped in from behind the 16th green at Augusta National. Phil Mickelson is a favorite. Countless players said they sought the counsel of the three-time green jacket winner. The same goes for Fred Couples, the 1992 champ.

All good golf heroes, no doubt. But Brian Harman’s is “kind of a throwback.”

“A guy I looked up to and playing a bunch with was Anthony Kim,” said Harman, who was one shot out of the lead entering Saturday’s third round. “I remember he came around Augusta, and he made like 10 or 11 birdies one day out here.

“I used to always love the way that he played the game. He’s bold and took on — took chances.”

Nevermind the fact that Kim is 35 — and Harman is 34. Ignore that Kim mysteriously hasn’t played in a PGA Tour event since 2012, when he withdrew from three straight tournaments. There have been sightings through the years — as GOLF’s Dylan Dethier described in detail last year — but no golf.

No matter. Harman remembers AK. The three Tour victories. The brashness and swagger. The belt buckle. And, as Harman said, that second round in 2009, where Kim shot a seven-under 65 — with an Augusta-record 11 birdies. (He also made two bogeys and a double.)

“I’m not as good as he was, but I’d like to think that I try to harness some of that energy sometimes,” Harman said Friday.

Through two rounds, he played the part. Harman opened with a three-under 69, then followed it up with another after birdieing his last two holes. On Saturday, Harman was in the second-to-last tee time.

Harman’s was another chance-taker, to say it nicely.

“I think watching Phil win his first one is probably my fondest memory being a left-handed guy and watch him get that monkey off his back so to speak,” Harman said of Mickelson’s victory in 2004. “I watched him play every hole that day. They had it on TV all day long, and I remember watching every shot. And he played beautifully, and he just gives himself a chance on the last hole, wins and almost jumped in there after he made that putt.”