Where is Inverness Golf Club, home of the Solheim Cup? 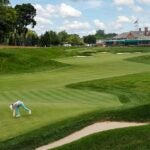 For golfers and golf fans alike, is there anything better than match play? Yes, there is. Match play at a historic venue for golf, which is precisely what awaits the very best players in the world when they descend upon Inverness Golf Club for the playing of the Solheim Cup.

The biannual match play event is back, and the anticipation is growing, particularly for the returning members of the snakebitten 2019 U.S. team. In that tournament at famed Ryder Cup and Open Championship host Gleneagles, the Europeans stunned the U.S. side by claiming a narrow, walkoff victory for the first time since 2013.

This year, the tournament returns to the United States, and to a vaunted club itching for more history, Inverness Golf Club. In the 20th century, Inverness was a perennial major championship host, claiming U.S. Opens, U.S. Amateurs and PGA Championships to its name. But as the game continued to grow in length, the setup at Inverness failed to grow with it. While the 1903 Donald Ross design never lacked for compelling strategy and intrigue for the average player, those with the capacity to hit it past Ross’ challenging fairway bunkers came to find a course ripe for scoring.

The club’s membership hoped to fix that, investing in a massive restoration project with the intent of not only returning the course to its original Rossian glory, but also with the hope of adding more length in order to return to the “big-time golf event” rotation. This year’s Solheim Cup is the first big-time event since the restoration, and figures to showcase the new course to the golf world.

So, with that brief history lesson in mind, one question remains: where on earth is the place?

Inverness Golf Club is located in the great midwest town of Toledo, Ohio; an hour’s drive north of Columbus or east of Cleveland. Toledo borders Lake Erie, and its closest major city actually rests in Detroit.

But there’s good news: you don’t have to drive all the way to Ohio to see Inverness host the Solheim Cup. Those hoping to tune into the action from this year’s event can watch on NBC and Golf Channel when the action is contested from Saturday, September 4 to Monday, September 6.