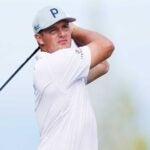 Golf's distance frontiersman has set his sights on something attainable.

The golf distance frontiersman that Bryson DeChambeau has proven himself to be in the last 24 months has accomplished so much, but has failed to explain exactly where the stopping point is. How far is far enough? And at the same time, how far is too far?

These questions are some DeChambeau appears to be thinking about now that he’s regularly reaching 200 mph ball speed with his driver. After talking with Todd Lewis from Golf Channel earlier this week, it appears that frontier is not too far away. DeChambeau said he spent some time with Long Drive Champion Kyle Berkshire (which you can check out here) and his coach Chris Como to try and get even faster. The result is remarkable.

“Whether it happens this week or not, we’ll see,” DeChambeau told Lewis. “Obviously it’s body-dependent but yesterday on the driving range I got it to 211 mph ball speed.”

Lewis was astonished. You can hear it in the clip below. But that’s driving range speed. How much does it matter?

“If I can ever get it to 207 to 210 on average with the driver, out on Tour, which is kind of where I’m at, at that point I’ll be like, ‘Okay, that’s good enough,’” DeChambeau said. “That’s kind of what Kyle’s at. If I can just get to where he’s at, that’s going to be plenty good enough for years to come.”

You heard it, straight from the horse’s mouth. 207 to 210 mph ball speed with the driver. That’s the frontier DeChambeau feels he can reach, which he hopes and believes will not lead to depreciating performance. It will not be easy for him to get there.

Think back to Summer 2020, when DeChambeau won in Detroit. He was not reaching 200mph ball speed in competition. It was a big deal when he topped 196mph. So, in the months since, he’s clearly untapped a new level, but in-competition swings are always much slower than on the driving range. For instance, DeChambeau pointed out how he hit one tee shot on 18 Tuesday and reached 201 mph. For him to regularly add another 6 to 9mph will take a lot of time and work. Clearly he’s the man for the job.

No one should be surprised at DeChambeau’s insistence on gaining speed. But the levels he continues to reach are spellbounding. Another important question to ask is how many people will follow him. DeChambeau’s gaudy speed numbers can really only be matched on Tour by Cameron Champ, but just last fall numerous players showed an interest in swinging faster than ever. It may just be part of the future.

When asked for his best prediction last August, noted golf biomechanist Sasho Mackenzie laid out the standards bluntly. “It may take a bit of time,” Mackenzie said, “but the best in the world will learn how to reliably shape drives at 200 mph ball speeds.”

There you have it.