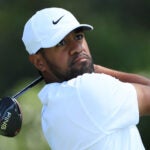 Tony Finau hits a drive during the Tour Championship two weeks ago.

Tony Finau takes his backswing back somewhere just short of a full swing. He’s said he rarely swings harder than 80 to 85 percent of what he’s capable of. “I don’t really ever go out at 100 percent when I’m playing tournament golf,” he said in July at the Memorial.

He also averaged just over 309 yards a drive last season, 13th best on the PGA Tour. Or, to do some more math, only 12 golfers hit the ball farther than 80 percent Finau.

On Monday, during a practice round at Winged Foot Golf Club in advance of this week’s U.S. Open, Finau took his backswing back just past a full swing. He was asked not to hold back, and he did not.

“Oh,” said someone in the background after Finau’s swing, which was posted by the Instagram account Sacred Links.

On the drive, Finau took one waggle of his driver and looked up. He repeated it. He took his driver back about a quarter of the way, looked up and brought it back. Finau waited a second and swung swung.

“Tony Finau today going as hard at driver as he can,” the Sacred Links account wrote. “Everyone has been speculating what it would look like if Tony went after one. We asked him to not hold back and this is what happened!! . Past parallel with ball speed likely around 200 mph. @brysondechambeau your up. These guys can really move it.”

One week before the Memorial, he shot a 59 at a course in Utah. The next day, he went full Finau swing on a drive, and the ball went 383 yards, with a ball speed of 206 mph. Last season, for comparison, the highest recorded ball speed on Tour was DeChambeau’s 197.59.

Finau said it was around that time that he and his coach, Boyd Summerhays, decided to let loose.

“Yeah, kind of in the middle last week my coach, Boyd Summerhays, and I decided to crank some up a little bit after being inspired by Bryson, seeing how straight he was hitting it and how hard, and so I decided to crank it up and work on hitting a really hard fade,” Finau said at the Memorial. “I’ve let a few go so far this week, and it’s been pretty fun for me to kind of reach back more so than I have in the past and kind of open up and hit some.”

Then, at the PGA Championship a few weeks later, a few players were asked who the longest player on Tour was. Champ said it was Finau.

Finau also said Finau. He was being truthful, not boastful.

“I think if we were all to maybe tee up four or five golf balls on the range and just let loose, I have a hard time believing somebody is going to hit it further than I am,” he said. “Just because I’ve always kind of had that speed. When I was younger, I got up to about 212 ball speed with a standard driver, which is pretty fast. I don’t know if I quite have that, but I got up to 206 there about a month ago, and that was only just trying for a day.

“I’ve got it in the tank, but I don’t really know where it’s going, so I don’t use it on the golf course.”