When animals attack! How to fend away gators, geese and everything else that could harm you on a golf course 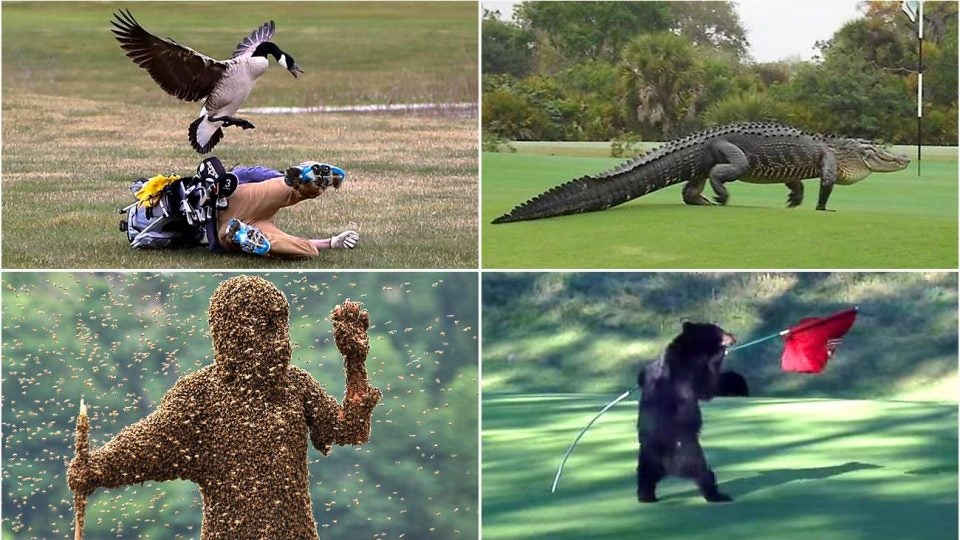 As golfers, we get tips on how to handle all kinds of hazards, except for hazards of the living, breathing kind.

A reminder came this week from World Creek Golf Course in Adrian, Michigan, where high school golfer Isaac Couling came under aerial assault from an agitated goose in an incident both frightening and funny (funny only because Couling didn’t get hurt). Couling was playing in a competition, so we’re guessing he had access to a yardage book.

What he really needed was Rachel Levin’s book.

Levin is the author of Look Big: And Other Tips for Surviving Animal Encounters of all Kinds, a hot-off-the-presses tome that is to inter-species relations what Hogan’s Five Fundamentals is to the modern swing. With the harrowing-cum-humorous events of Michigan still fresh on our minds, Golf.com reached out to Levin for advice on what to do when the tables turn and the birdies (and other creatures commonly found on golf courses) start hunting you.

How to Handle: When dealing with an angry, airborne goose, one thing to do is duck. That’s not for wordplay purposes. It’s to avoid getting pecked, or whacked by wings or webbed feet. Don’t drop to the ground, though, Levin says. You want to appear at least somewhat threatening, even if you’re feeling like a wimp. Look the goose in the eye and, above all, don’t panic. No running. No screaming. No swatting. No swinging. It’ll escalate the situation. “Staying calm is pretty good advice for any encounter, animal or human,” Levin says. Save the duck, duck goose jokes for later.

How to handle: If the bear is acting defensive (ears back, jaws clacking), that doesn’t mean it’s doing its impression of Tiger Woods at a press conference. It means that it’s on high alert. Your best move is to retreat slowly, turned sideways while avoiding eye contact. “You want to appear as unthreatening as you know you are,” Levin says. The caveat is that bears are complicated, and a lot of your response comes down to reading signs, which can be hard to do in the heat of the moment. If the bear appears to be in predatory mode (ears forward, head up, stalking, staring you down), look big, raise or throw a golf club. If the bear charges, hope it’s bluffing. If it’s a mom with cubs, play dead. With any luck, that won’t become your permanent role.

How to Handle: “That thing about no floral prints or bright colors is BS,” Levin says. So you’re safe wearing your Al Czervik wardrobe. What you shouldn’t wear is perfume or cologne. Deodorant is different. Levin recommends it, “since your naturally sweaty, smelly body attracts them.” The good news is: you can outrun bees. So if a swarm comes at you, don’t swat. Sprint.

How to Handle: You can probably outrun an alligator, too, Levin says. But why would you want to risk that footrace? Truth is, gators aren’t really apt to chase you. They’re opportunistic lurkers, specialists in surprise attacks. If they miss on their first strike, they’re usually not inclined to light out in pursuit. When you’re in gator territory, avoid lingering by the water’s edge, or dipping your hand to retrieve a lost ball. If a gator latches on to you, go ballistic. Make a commotion. Kick. Scream. Flail. Gouge its eyes. Your chances are much better on land than in the water. Do anything you can to prevent them from dragging you toward the depths into a death-roll, which is pretty much as final as it sounds.

How to Handle: Look big and very much alive, Levin says. Throw a beer can. Climb on top of a golf cart. Wave your golf club. If attacked, fight for your life. “Do not play dead,” Levin says. “You’ll be dinner.”

How to Handle: Think of how you deal with your emotionally fragile buddy after he misses a three-foot putt. Then deal with the rattler in the same way. Leave it alone. Give it wide berth, at least 15 feet. If it’s coiled with its head raised, stay even farther away. If you’re hunting for a lost ball in the woods, tread loudly. Most snakes would rather avoid you, too. If you step on one and get bitten, don’t freak out. Channel Fred Couples and stay cool. “If you start jumping around, the poison spreads faster,” Levin says. “Sucking out the poison doesn’t work. Call poison control pronto.”

The Hazard: Monkeys and Baboons

How to Handle: On the golf course, baboons and monkeys are like weekend duffers: they devour junk food and there’s otherwise no saying what else they might do. If one grabs your hot dog, don’t try to grab it from them — they’ll fight you for it, and you’ll lose. Don’t smile at them, either. In lower primate body language, baring teeth is a sign of aggression. If a monkey or a baboon smiles at you, they’re not being friendly. Back away without turning your back to them, and hold your hands out, palms open, so they can see you don’t have food.

How to Handle: Pack gopher holes with excessive quantities of explosives and detonate, destroying golf course in failed attempt to eliminate your rodent problem. Wait. Forget that. We got that tip from Caddyshack.