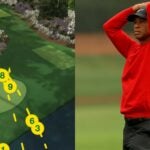 Tiger Woods recorded his highest ever score in a major championship on Sunday at the Masters.

The 12th hole was a dream for Tiger Woods on Sunday at the 2019 Masters. This Sunday, it was a nightmare.

Woods hit three(!) balls in the water on the short par-3 during his final round at Augusta National, eventually signing for a 10. The score is his highest ever as a professional.

His initial tee shot followed the typical script for those that find the water on the 12th when taking on the usual Sunday pin location — a lazy fade that comes up short and rolls back into Rae’s Creek. From there, he took a drop across the water and tried to wedge on from there. His wedge after the drop found the drink as well, an overly zippy wedge pulling the ball back into the water. But his nightmare was far from over.

Woods’ next wedge flew the green and found the back bunker, resulting in an awkward stance and little chance of getting the ball close. He caught it thin and blasted it into the water once again. A simple pitch and two-putt later, and he signed for an embarrassing and disappointing 10.

This is far from the first time the 12th has yielded a stunning result. In 2016, Jordan Spieth made a quadruple-bogey 7, sinking his hopes of claiming back-to-back green jackets as Danny Willett came from behind to surpass him on that Sunday. And last year, three of Woods’ competitors hit balls into the water at the 12th, opening the door for him to charge for his 15th major.

The seven-over result on the par-3 dropped Woods to four over for the tournament and nine over the day. His hopes of a title defense were already shattered before Sunday, but this finish is certainly not what Woods had in mind for his first Masters Sunday back as a defending champion.