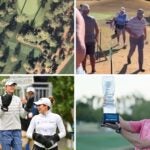 There was wide-ranging action in the golf world this week.

Welcome back to the Monday Finish, where we’re still amazed that Patrick Mahomes threw for 177 yards in two minutes — the same amount of time it would take some Tour players to hit one shot that same distance. Let’s get to it!

As the sporting world focused its gaze on four fantastic football games over the weekend, only a couple golf moments broke through the noise. But two of them came on the same subject: course setup. Both were spoken with passion. Both were refreshingly honest. And both spoke to the difficulty of setting up a golf course for elite competition.

The first came courtesy of Jon Rahm, who was captured unleashing a string of expletives as he walked off one green at PGA West during Saturday’s round, which can be loosely translated as follows:

(You probably figured this out already but the below video contains profanity.)

What does that mean? We can guess that Rahm is suggesting that the setup at the American Express wasn’t a particularly stern test of golfers’ tee-to-green precision, leveling the playing field and turning the whole week into a “putting contest.” Rahm has always preferred tough golf courses and has played well on those courses, too (you’ll remember wins on challenging setups at the U.S. Open, Memorial and BMW, among others).

It also means that Rahm wasn’t winning that day’s putting contest, and as a frustrated golfer who runs hot and has high expectations, he was bound to spout off about something. In a clearer moment he might have expressed himself a bit differently.

The second moment came via Tyrrell Hatton, who spoke to a group of reporters post-round and essentially gave his blessing to blow up the 18th hole at Yas Links, the Abu Dhabi host course of the week. We would have loved a video, too, to really drive home the point, but the quote, gathered by David Facey of Golf Monthly, speaks for itself:

“My feelings as I stood on the 18th green was still that I’d like to drop a bomb on that hole, and wipe it off the face of the earth,” Hatton said.

I appreciate his candor and from what I saw of Yas Links’ 18th, I’m not sure the 646-yard par-5 is the greatest hole I’ve seen. I don’t particularly agree with his follow-up assertion that every par-5 should be reachable in two shots for Tour pros, especially those who average modest distances off the tee like Hatton. And I think his frustration with the hole was likely inspired by a double-bogey 7 on Saturday and exacerbated by a quadruple-bogey 9 on Sunday.

John Huggan of Golf Digest collected a quote from Rory McIlroy — who bogeyed three of his final five holes — that flew more under the radar but was just as revealing. Informed that Yas Links will host the event for three more years at least, McIlroy grinned. “See you in 2026.”

There’s a dilemma here. Golf courses with particularly easy setups make for dull TV and don’t separate the good golfers from the great as effectively. But pros don’t like feeling uncomfortable on courses, either, and it’s pretty easy for negativity on a course setup to snowball. (U.S. Open staffers will know a thing or two about this.) Every non-major is in a constant fight for players’ attendance at their event, which means they’re looking to keep the players happy, and the safer strategy for keeping players happy is to make sure the course is fair and playable, erring on “easy” rather than “penal.” The American Express faces extra challenges, as it includes amateurs playing alongside pros (which means easier pins) and features three different courses rotating across the first three days (which means avoiding any radical scoring discrepancies).

There is, of course, a middle ground here. On professional golf’s best weeks the courses are interesting, memorable, fair, challenging and turn into compelling sports arenas as a result. But hitting that fine line is probably tougher than it seems at first.

Who won the week?!

Danielle Kang won the Tournament of Champions, which makes her the champ of the champs, I guess. Orlando got chilly on Sunday, scores rose and Kang took over, making five birdies in seven holes in the middle of the round to go from a couple shots down to a couple shots ahead. A three-shot win is an electric way to start the season — and now Kang is back to No. 8 in the world.

Hudson Swafford won the American Express, emerging from a 12-car pileup with a ridiculous back nine of birdie-birdie-birdie-bogey-birdie-bogey-eagle-birdie-par and a two-shot win. The win is Swafford’s third, and he said it came in honor of his father, who died in December.

Akshay Bhatia won on the Korn Ferry Tour, living out a dream week with his girlfriend on the bag, a comped room at Sandals and an epic approach shot into 18 to seal the deal:

We can round up and call ’em winners, too.

Annika Sorenstam made it into a playoff in the celebrity division of the Tournament of Champions. What does that mean? It’s hard to know, but it was fun watching her get in the zone and get more comfortable with her game as the week went on. Sorenstam is 51 and could definitely still make cuts on the LPGA Tour; time will tell how interested she is in the grind. (Also shoutout to Derek Lowe, who edged out Sorenstam in a playoff.)

Nelly Korda led through 54 holes at the TOC but looked like a different golfer on Sunday and closed with a round of three-over 75 in the Orlando chill to finish T4. Everyone was layering up on Sunday but Korda looked notably chillier than everyone else; she admitted after the round that playing in the cold is a puzzle she hasn’t yet solved.

“I was freezing. I always get colder than it actually is. I’ve always said that. That’s why I stay away from tournaments that are always in the cold because I struggle so much in it. I don’t know why. I feel so stiff. Something I just need to suck up and mentally trick myself, but yeah, I struggle in the cold.”

After last year’s runner-up showing at the Masters, Will Zalatoris settled into the tier of “good PGA Tour pro” for a few months. But it felt like only a matter of time before he returns to “ascendant Tour star” — and maybe now he’s there. Zalatoris fired a bogey-free 67 to finish T6.

Joining him at T6: Francesco Molinari! The soft-spoken Italian marksman hadn’t logged a top 10 since last year’s Genesis Invitational but he was right around the lead all week and was one seven-foot par putt from a week of 67-67-67-67 (he tapped in for bogey and a final-round 68).

This wasn’t their week.

This week was the 2022 Tour debut for two notable bombers: longtime launcher (and tournament host!) Phil Mickelson and new sensation James Hart du Preez, the 6’9 400-yard crusher. The cut came after three rounds this week, and the field’s healthy majority finished under par. Mickelson finished seven over. Du Preez finished eight over, ahead of just one golfer.

Rickie Fowler is looking for a statement season after slipping outside the top 100 in the world. Matthew Wolff is looking to build on a strong fall after an uneven 2021. Cameron Champ is coming off an injury and working his way back into playing shape. All three guys may have terrific 2022 playing seasons. But all three began with missed cuts in the desert.

The scratch golfer-slash-athletes assembled for the Tournament of Champions were a hearty bunch: Mark Mulder has played a PGA Tour event, John Smoltz has made a run at the Champions Tour and Mardy Fish shot 63 in tournament play in 2020. But this week they played from the same tees in the same conditions as the LPGA pros and gave us a fantastic head-to-head reminder of just how much better top LPGA pros are when compared with elite ams. I broke down the numbers here, but a summary:

Cool news from Streamsong, where a non-traditional short course designed by Bill Coore and Ben Crenshaw is expected to open in the next couple years. Golfweek reported that holes will range in length from 70 to 300 yards, which sounds like an extremely fun length for golf holes to be.

Augusta National, meanwhile, is up to some stuff. Because it’s the course we know the best and also the course that’s especially secret about what it’s up to, it’s always interesting when eagle-eyed spotters find little tweaks from year to year. According to some overhead imagery posted on Twitter by @Puttviewbooks, the tees at both No. 15 and No. 18 are moving slightly farther back. My first instinct is that the 18th tee shot becomes even scarier, but maybe that’s irrelevant to Tour pros.

Let’s get a little better!

This one comes from Inbee Park, and if it’s true for her, it’s triply true for you and me:

“I mean, at the moment when you’re playing so bad and in a bad time, you kind of think that everybody is watching you. When you’re not doing well, not playing well, it’s embarrassing and I don’t want to go out here.

“I went through that stage. I just came to realize that those things really don’t matter and people don’t care about you that much, as much as you think. It’s you that cares about you.

“You don’t really need to worry about other people. Worry about yourself and what you’re doing is right and just got to have the trust that everything is okay. Even if you fail, it’s golf. In golf, you fail.”

That last bit is going to stick with me: “In golf, you fail.”

Ian Woosnam announced this week that he won’t be playing in the Masters. We’ll miss him, but a way you can honor him is by watching this epic home video of Woosie scarfing down a hot dog and some red wine:

One of the unexpected joys of my 2021 was warming up on the driving range alongside Patrick Mahomes and talking about his newfound obsession with the game:

I can’t kick the idea that Torrey Pines still represents the beginning of the PGA Tour season. That’s probably hard-wired from years and years of Tiger Woods beginning his season at various editions of the Buick Open (now Farmers Insurance Open) but there’s some legitimacy to it still: it’s the first full-field event with a strong PGA Tour field. This week? That field is plenty strong. Even better, it starts on Wednesday. Midweek golf!