When it comes to welcoming beginners, golf could learn a lot from skiing 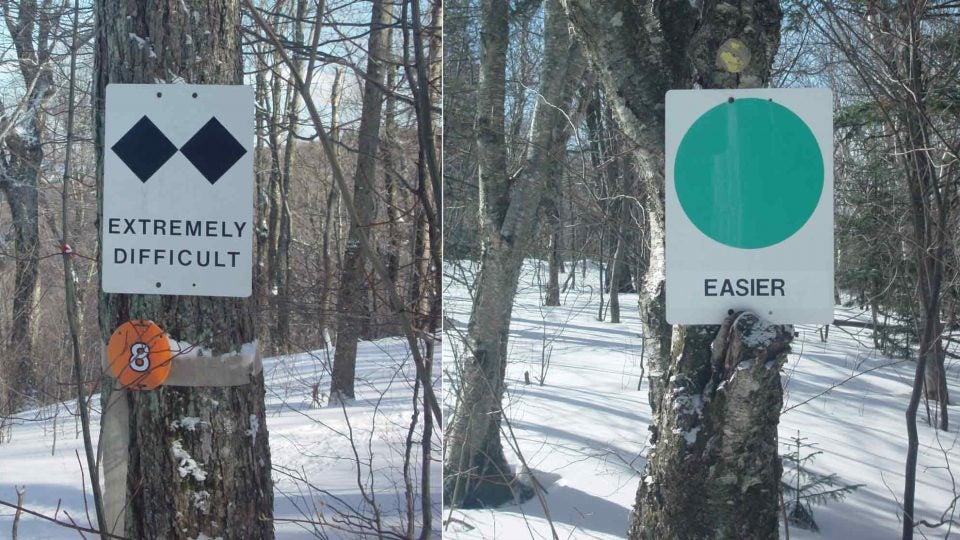 A couple of weeks ago my family and I took a ski trip to the Catskills, in upstate New York, where my three youngish sons experienced their first black-diamond trail. This being a golf website, I should explain here that a black diamond is a slope intended for advanced skiers. My boys are decidedly unadvanced skiers — this was their fourth time on the slopes and first time beyond the relatively meager mounds of Pennsylvania — so the unfortunate outcome on “Dot Nebel,” as the trail was named, should have come as no surprise: a comical mess of tangled skis, awkward tumbles, nerves, rage, fear, even tears. My wife and I likely would have heard some colorful language if the boys’ heads weren’t buried in artificial snow.

It was my fault. I knew exactly what a black diamond asks of a skier, yet I urged on my sons anyway — not so much to test them but to access other trails halfway down the mountain that we hadn’t skied yet and which were much more in keeping with the boys’ ability. When we finally made it down, uninjured other than a few bruised egos, we made our way to less-taxing trails, the ones denoted with green circles and blue squares. The rest of the day was a joy. Or at least I thought it was.

The episode was a reminder of one of the beauties of skiing: Most mountains offer something for everyone, from wobbly-legged beginners to mogul-shredding maestros. But it also got me thinking about one of the shortcomings of golf: Few — actually, hardly any — golf courses are truly welcoming to novices or distance-challenged players. I don’t mean in the pro shop, or on the practice tee or at the 19th hole; I mean in how courses are set up. For beginners, short-knockers and once-a-year golfers (all of whom the game should be embracing), virtually every hole on a regulation course is the equivalent of a black diamond.

News
The best advice for beginners, according to 5 low-handicap golfers

Golf tries to cater to all skill levels, with anywhere from three to six or more sets of tees on every hole, which in theory offer a wide range of playability. But the front tees in golf are nothing like green-circle trails in skiing; they’re not positioned with nervy, worm-burning newbies in mind — not even close. If the game really wanted to embrace all comers, the front tees on par 4s and 5s wouldn’t be 40 or 50 yards ahead of the middle tees, they’d be 140 to 150, even 200(!), yards ahead. (Courses might even think about employing pros who could shepherd new players from one hole to the next in the same way that ski-school instructors assist new skiers, but that’s another column.)

These “green circle” tees would be placed in the middle of fairways and playable by anyone who can advance the ball at least 50 yards. Yes, some courses already offer tees of this nature, but they’re typically only used by tykes during less trafficked hours. Under this new tee structure, green par-5s would play around 250 yards, par-4s would be in the 150-yard range and par-3s would be 50-75 yards, for a total of about 3,500 yards. The most direct path from tee to green would include no forced carries and few, if any, hazards, other than those around the green.

In this brave new you-don’t-have-to-be-good-at-golf-to-enjoy-it world, where rookie golfers would be less daunted, the next set of tees back — let’s stick to skiing parlance and call them the blue-square tees — would be more challenging (5,200-ish yards) but still much shorter than what golfers now customarily see from middle tees. Further back still, at about 6,000 yards, would be the black-diamond tees for “advanced” golfers, say, 90s-shooters who hit their drives 200-230 yards.

Two more sets of tees — indicated by double black diamonds and triple black diamonds — would present the most challenge. These tee lengths, using most or all of the real estate a course has to offer, would be for expert golfers. Actual experts.

Greater disparity in teeing-ground distances wouldn’t make the game any less challenging or fun; golfers would still have the option to play from wherever they like. But more tees positioned much farther up might help soften some of the machismo and chest-thumping that permeates golf — i.e., the notion that if you’re not playing from 6,500 yards or longer, you’re not really playing. With green-circle and blue-square tees at every course, golfing norms would evolve. For many players, 6,000 yards would start to feel like plenty.

For most golfers 6K is plenty. Among the findings recently presented in the governing bodies’ Distance Insights Project was that recreational golfers are biting off more than their swing speeds can chew. In other words, sorry, pal, but you’re probably not as long as you think you are. “At many courses, the most forward tees are very long relative to the hitting distances of many golfers who typically use them,” the USGA wrote in its conclusions to the project.

According to the report, the average and median lengths of the forward tees at U.S. courses are in the 5,200- to 5,300-yard range.

“As a result,” the USGA writes, “many golfers using these tees may have little chance to reach various greens in regulation even with their longest and best drives and approach shots, and therefore are not offered the same type of playing experience as others on the same hole.” That’s some heavy stuff: Too many golfers are quite literally playing a different game from really good players.

The USGA posits that golfers play from the wrong tees for one of two reasons: either (1) simply because they want to, or (2) because courses are encouraging use of those tees.

Golf courses can’t do much more about the first reason, but they can and should take meaningful action on the second. Offering more teeing options at shorter distances would be a low-cost, low-lift means of making golf more welcoming and less punishing. A few new markers plus some tweaked scorecards and — voila! — golf courses could change the game.

Heck, I might even take the whole family out for a round. No helmets required.