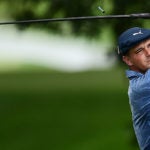 Bryson DeChambeau tees off on the 7th hole at TPC Southwind on Sunday.

Bryson DeChambeau is leading the PGA Tour in driving distance this season. On Sunday, during the fourth round of the World Golf Championships-FedEx St. Jude Invitational, he hit drives of 334 yards, 325 yards, 331 yards, 366 yards, 359 yards and 329 yards. The ball’s finish is impressive.

The ball’s start is, too.

One of DeChambeau’s drives from the first round was shown in super slow motion during CBS’ broadcast. The cameras then zoomed in on his white Bridgestone ball sitting on a black tee.

“Let’s just concentrate on impact,” analyst Nick Faldo said. “What on earth happens to a poor golf ball when you do that to it? We’re going to freeze-frame it, and we’ll slow it down.”

The driver hits the ball. The ball’s right side smushes. It appears some of its white paint flies off. The tee tilts forward to the ground before springing up.

“Oh, if I was a golf ball I would need a couple of Advil after that,” Faldo said. “Look at that. That’s what happens to a golf ball, folks, when it gets crushed. It then springs off. That’s the science that goes into this game. Amazing.”

Faldo and announcer Jim Nantz said that the ball was shown at 18,000 frames per second. It had been 1,400 on previous slow-motion videos.

“You can even hear the dimples scream now,” Faldo said.