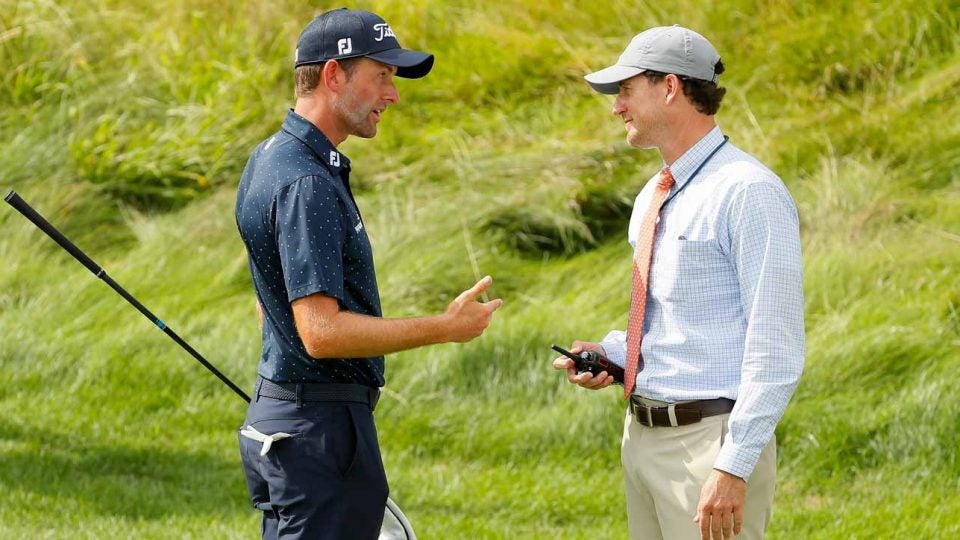 Webb Simpson confers with a rules official about his cracked driver Friday at the 2019 Northern Trust.
Getty Images

Webb Simpson took a step back during the second round of the 2019 Northern Trust, shooting a 73 to fall to four under. There’s one obvious reason for his poor score: he played almost the entire round with a cracked driver.

After Friday’s play was complete, Simpson told reporters that his tee shot on 3 felt “funny,” so he investigated his driver and determined the face had cracked. Simpson’s caddie agreed, as did his playing partners. But due to a nuance in the Rules of Golf, rules officials refused to allow him to replace the broken club.

“I always carry a backup driver with me. I have for years,” Simpson said Friday evening. “The rule has been, if it’s cracked, you can go get your other one. But the rule’s changed, so I couldn’t change.”

Because the rules barred him from replacing his driver, Simpson was forced to continue using the damaged club for the rest of the round. He used the cracked driver “four more times,” in addition to using a 3-wood on 16 when he’d normally have used the big stick.

When asked if he knew the rule before Friday’s incident, Simpson responded, “No.”

“There’s a lot of rules that I don’t know,” Simpson continued. “Honestly a lot of players are still really confused. My ball rolled today on the fifth hole. Nobody knew what to do. And everybody’s going to say, well, you guys should know the rules. Well, there’s hundreds of rules to know. They changed the rules a few years ago, and they have edited some of those rules since.”

With the new Model Local Rule G-9, players are no longer prohibited from replacing a club they or their caddie damaged during a round. But there are two caveats:

First, clubs that are damaged during “cases of abuse” are still barred from being replaced. So, if you want to try a new driver mid-round, you can’t just snap your other one over your knee and replace it.

Since Simpson’s driver was only cracked, it was not considered “broken or significantly damaged,” and, therefore, he could not replace. It’s this detail of the rule that Simpson took exception to.

“The consensus among me and the other guys I was with and the other players in the rain delay was if it it’s cracked in the driver – it’s cracked. What harm is done by letting me switch, you know, heads?” Simpson argued after his round. “I don’t know why they changed it. I’d love to know. So glad it didn’t cost me a missed the cut, but it’s unfortunate. I feel like it cost me a few shots.”

It appears that it did cost him a few shots after all. Simpson’s second-round 73 was eight shots worse than his stellar first-round score at Liberty National. Though it’s impossible to attribute Simpson’s poor score entirely to the cracked driver, there’s a good chance it had a significant negative impact.

Despite his issues on Friday, Simpson finds himself at four under and T34 heading into Moving Day. His projected FedEx Cup standing is currently 11th, but he’ll have a good chance of climbing a few spots over the weekend with a new, undamaged driver in his hands.