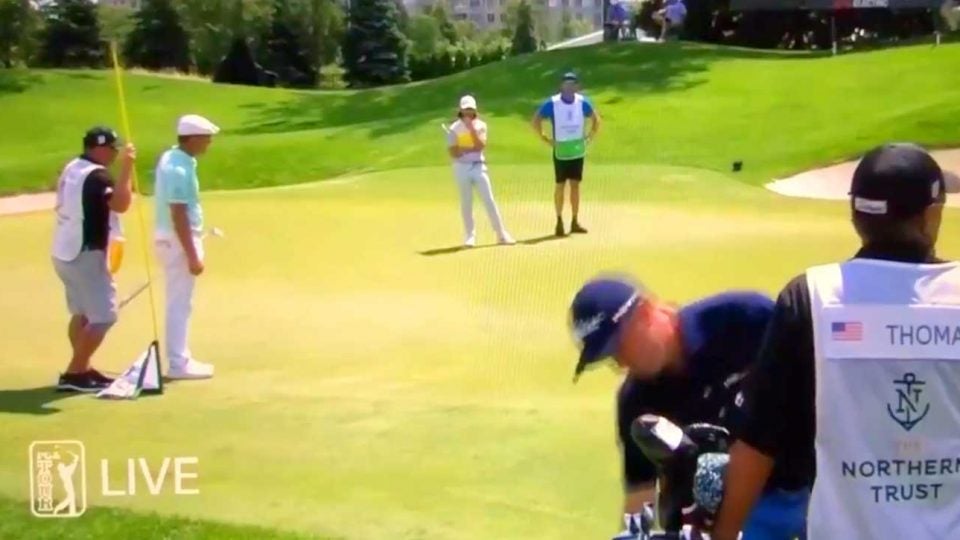 Bryson DeChambeau agonizes over a putt during the second round of the 2019 Northern Trust.

With all the talk and typing done in appreciation of Bryson DeChambeau’s innovative uber-analytical approach to golf, one topic is often left unaddressed: how long it takes him to hit a shot. This week at the 2019 Northern Trust, DeChambeau’s slow play is starting to rankle fans, broadcasters, and his fellow pros alike, with one pro even calling him a “unaffected single minded twit” on Twitter.

DeChambeau went 68-68 over the first two rounds at Liberty National to reach six under for the tournament, leaving him T20 heading into the weekend at the FedEx Cup Playoffs opener. Not too shabby. But, to be kind, he has been less than efficient.

A couple of telling videos have surfaced demonstrating exactly what is causing so much frustration.

First, we present to you Bryson’s second shot on the par-4 16th in the second round (or, more accurately, his pre-shot permutations for the shot.) His tee shot at 16 went wide left into a spectator area beyond a group of trees. The poor shot left Bryson with about 70 yards to the hole. But it would take him a full three minutes to figure that out.

That’s because Bryson chose to personally pace out the shot. With playing partners waiting in the fairway and around the green, DeChambeau slowly walked on a direct line from his ball, down a hill, then up another and onto the green. After examining a potential landing spot, he slowly walked back to the ball. Only then did he start his multi-step pre-shot routine. At that point, after much time had passed, he signaled for playing partner Tommy Fleetwood to go ahead and hit before him.

News
Tiger Woods, Bryson DeChambeau explain frustration with being put on the clock

“As I suspected, once he gets everything figured out here, it’s actually a very straightforward shot,” the patient broadcasters reported as DeChambeau continued to analyze the shot.

anyone need a nap?

here’s DeChambeau pacing off a 70-yard shot which took over 3 minutes to hit (couldn’t post the entire video it took so long) pic.twitter.com/7A3Azeftyu

Perhaps more egregious was his display on the 8th green on Friday. DeChambeau hit his approach in tight on the par-5, setting up a short 8-foot putt for birdie. After pacing around the hole and his putting line, checking his green-reading book several times, and leading a statistical back-and-forth with his caddie, DeChambeau finally hit his putt, over two minutes after he began. He missed badly, and settled for par.

The TV announcers were once again frustrated by DeChmabeau’s painfully slow play, to the point where they began criticizing him on-air as he was going through the motions over his putt.

“I’d love to see Bryson DeChambeau just play nine holes with his buddies, speed golf, couple of beers in tow, and see how he does without all the analytical stuff that goes into it. Could he do it?” asked one of Golf Channel’s play-by-play announcers.

“You need to be an aeronautical engineer to be his caddie,” joked his partner in the booth.

“I mean this is tough for his playing partners, I’ve got to be honest, when you’re standing around waiting with all of this going on.”

DeChambeau predictably got shredded on Twitter, but not just from golf fans. Fellow pro Eddie Pepperell, never one to hold back his true feelings, ripped Bryson in a tweet, calling him an “unaffected single minded twit” who “doesn’t care much for others.”

Just look at Tommy and Justin, both looking completely bored. Slow players do this to their playing partners making the game less enjoyable. Problem is, the unaffected single minded twit in this instance, doesn’t care much for others.

As far as we know, DeChambeau did not receive any punishment for his glacial pace in the second round, which would not be surprising. It’s unlikely the public shaming will result in any changes to Bryson’s strategy either. As Rory McIlroy and Brooks Koepka argued earlier this week, slow play will never get better unless the PGA Tour starts getting serious about punishment.

DeChambeau begins the third round of the Northern Trust at 12:15 p.m. on Saturday alongside Dylan Frittelli.