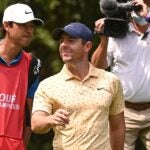 Sometime Friday afternoon, a 4-day-old girl in Florida ate one of her first-ever meals. Her first-time dad thought about it.

Golf requires putting a small ball in a small hole. Each felt smaller for Rory McIlroy.

“it’s like every three hours she’s supposed to be fed, so I’m like, OK, there’s a feeding coming up,” McIlroy said of his daughter, Poppy. “But like it’s natural. It’s natural that in between shots you think about other things, and obviously my mind has been very much on what’s going on at home.”

Golf felt simpler for McIlroy, too.

McIlroy birdied his 1st hole on Friday during the first round of the Tour Championship at East Lake Golf Club in Atlanta. He played the next nine holes at even-par, then played the last eight at 5-under, which included birdies on his final three holes, for a 6-under 64. It tied him for the day’s lowest round. It put him four shots out of the lead in the event where starting scores were based on season-long performance. It gave him his second-lowest round of the year, and just a stroke off his best.

McIlroy revealed after last Saturday’s third round of the BMW Championship that his wife, Erica, was expecting. He said he was prepared to leave either that event or this week’s Tour Championship should we receive word, then flew back Sunday night and was there for the birth early Monday afternoon. With everyone safely home on Wednesday, he flew to Atlanta on Thursday morning.

“Yeah, golf was the furthest thing from my mind the first few days this week,” McIlroy said. “And then once we got home on Wednesday and everything was good and mom and baby were healthy, that sort of took a load off my mind, and that meant I could come here and somewhat focus on what I’m supposed to do.

“It was just nice to get home, as I said, have that reassurance that everything is OK, and then if anything, what’s happened the last few days, it’s nice to get out on the course for four or five hours and just do this.”

Before the Tour Championship, McIlroy had not missed a cut since the PGA Tour’s restart in mid-June, but he had not finished in the top 10, either. He had admitted after the Northern Trust two weeks ago that “I feel like the last few weeks, I’ve just been going through the motions. I want to get an intensity and some sort of fire, but I just haven’t been able to. And look, that’s partly to do with the atmosphere and partly to do with how I’m playing. I’m not inspiring myself, and I’m trying to get inspiration from outside sources to get something going.”

McIlroy admitted that he was also focused on his daughter.

“I think that sometimes, you’re in limbo a little bit,” McIlroy said. “Your body is here and your mind is trying to be here, but your mind is also sort of divided and back there. I don’t want to say – it’s not an excuse. It wasn’t a distraction, but it was on my mind.

“At the end of the day, I just didn’t play well enough over the last few weeks to get myself into contention, and I never want to make the excuse that there was other things on my mind, because you should be able to concentrate for that 15 or 20 seconds you’re over a golf shot to do what you need to do.”